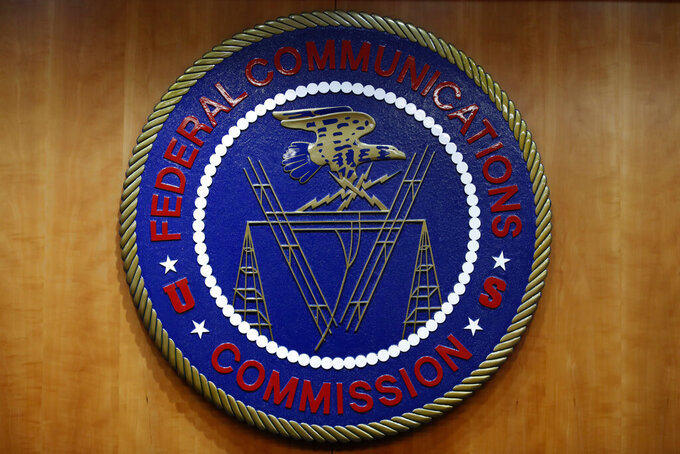 FILE - In this Dec. 14, 2017, file photo, the seal of the Federal Communications Commission (FCC) is seen before an FCC meeting to vote on net neutrality in Washington. The Senate has narrowly approved President Donald Trump’s lame-duck nominee, Nathan Simington, on Tuesday, Dec. 8, 2020, to become a member of the Federal Communications Commission. (AP Photo/Jacquelyn Martin, File)

WASHINGTON (AP) — The Senate has narrowly approved President Donald Trump’s lame-duck nominee to become a member of the Federal Communications Commission, setting up the agency for a stretch of partisan gridlock likely to stymie President-elect Joe Biden’s policies.

The vote Tuesday was 49-46 along party lines to confirm Nathan Simington as one of five commissioners of the independent regulatory agency. Simington is now a senior adviser at the Commerce Department agency that advises the president on telecommunications and information policy. He played a role in the plan by the Republican-majority FCC, announced before last month’s election, to reexamine the legal protections enjoyed by social media companies like Facebook and Twitter for content that people post on their platforms.

The FCC plan came in response to Trump’s executive order in May challenging the long-held protections for social media companies from liability, which have served as the foundation for unfettered speech on the internet.

’’Mr. Simington’s key qualification seems to be that he supports President Trump’s desired changes to Section 230, a law that regulates internet speech,” Senate Democratic Leader Chuck Schumer said on the floor before the vote.

The shield from liability for social media companies has been grounded in Section 230 of a landmark 1996 telecommunications law. Trump and Republican lawmakers have persistently accused the social media companies, without evidence, of suppressing conservative viewpoints, and Trump portrayed his executive order as a remedy for bias.

Democratic lawmakers, and Biden, also have supported limiting the liability protections of online platforms. But they believe it’s solely up to Congress, not the FCC, to make changes.

Consumer advocate organizations have opposed Simington’s confirmation, saying his joining the FCC brings deadlock that will block actions to foster the online access critically needed by consumers, workers and students during the coronavirus pandemic.

Speaking against Simington's confirmation, Democratic Sen. Richard Blumenthal of Connecticut said some 16 million students nationwide are effectively locked out of classrooms because they lack access to the internet. He called Simington “unprepared and unqualified" for the FCC position.

But FCC Chairman Ajit Pai, a Trump appointee, noted that Simington was raised in a rural community and said in a statement his confirmation “ensures that this important perspective will continue to be represented on the commission for years to come as the FCC continues its work on bridging the digital divide."

Pai is stepping down Jan. 20 when Biden is inaugurated. With Simington confirmed to the five-member FCC, there will then be a 2-2 split between Democratic and Republican commissioners. That likely will stymie Biden’s agenda until he’s able to get a fifth, Democratic FCC member confirmed, with an extended delay possible if the Republicans continue to control the Senate after the two Georgia Senate runoff elections.

Democrats want the FCC to restore Obama-era net neutrality rules, revoked under Pai’s tenure, which barred internet service providers like Comcast and AT&T from favoring some types of online traffic over others. An FCC under Democratic control also likely would focus on narrowing the digital divide, by getting internet services to people who don’t have access because the services aren’t available or they can’t afford them.

Under the current FCC regimen, schools can use federal pandemic relief funds to buy wi-fi hotspots and computers for students to use at home, but they aren’t allowed to dip into an FCC pot of money.

Before joining the government, Simington was an executive at Brightstar Corp., a wireless distribution company based in Miami. He also has worked in private law practice.

When he nominated Simington in September, Trump cited his experience with broadband and security for 5G, the next-generation wireless standard that promises faster speeds.

During Pai’s tenure, the FCC worked to free up spectrum for cellphone companies to enable them to roll out 5G. It also cracked down on Chinese telecom companies deemed as threats to U.S. national security.