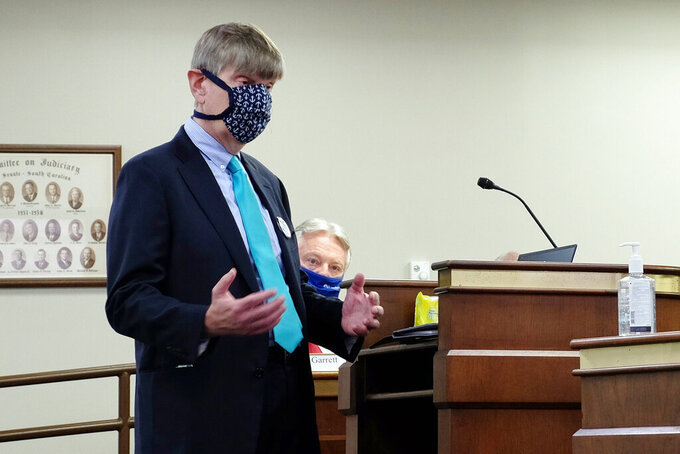 The Medical Affairs committee voted unanimously Tuesday to recommend Dr. Edward Simmer, the nominee chosen in December by the board of the Department of Health and Environmental Control, to the full Senate. He would be the agency's first permanent director in more than half a year.

Simmer must still get approval by the Senate in a confirmation hearing before he can take the reins, a vote committee chairman Sen. Danny Verdin said he hopes will be in the books by the end of this week.

Senators grilled Simmer on how he would improve the state’s coronavirus vaccine rollout, communicate with lawmakers and balance public health duties with those of environmental regulation.

The board-certified psychiatrist pledged to focus on social determinants of health such as hunger and substance abuse, and to bolster community outreach, especially in the state's rural and underserved areas. He also explained flaws he saw in the state's vaccine plan, including an appointment system difficult for people without internet access to use in the early weeks of the rollout.

“Obviously, we need to solve the COVID problem today,” Simmer said. “But we need to be able to apply the lessons learned from COVID to whatever the next crisis may be.”

If confirmed, Simmer would be the first doctor to direct the agency since 1986, according to the DHEC website. That's a credential lawmakers see as beneficial to tackling the pandemic that has killed more than 6,500 South Carolinians and sickened many more.

Still, he faces a challenge steering the mammoth state agency, with its more than 3,000 employees overseeing everything from hospitals to water quality to dams and landfills.

Simmer admitted he does not have a lot of experience with environmental regulation and will rely on subject matter experts within and outside of the agency. He told lawmakers he sees synergy between the department's two fields, given that much of the agency's environmental tasks — such as administering asbestos removal permits and ensuring landfills don't leak into water sources — also involve keeping people healthy.

The top seat has sat empty for more than seven months as the agency has attempted to battle the pandemic, frustrating some lawmakers to the point where a top state senator has proposed dissolving the department altogether.

Simmer asked for a year to take a deep dive into DHEC’s problems and come up with a solution that might not involve splitting up the department’s duties among other state agencies.

South Carolina joins many other states scrambling to find qualified health care leaders as public health officials have left the field due to pandemic pressure and political backlash. The agency has lacked permanent leadership since late May, when then-Director Rick Toomey stepped down, citing his own health.

The health agency’s board had spent 17 months looking for a new director before selecting Toomey in late 2018. Lawmakers have criticized the board over the pace of its search to replace Toomey.