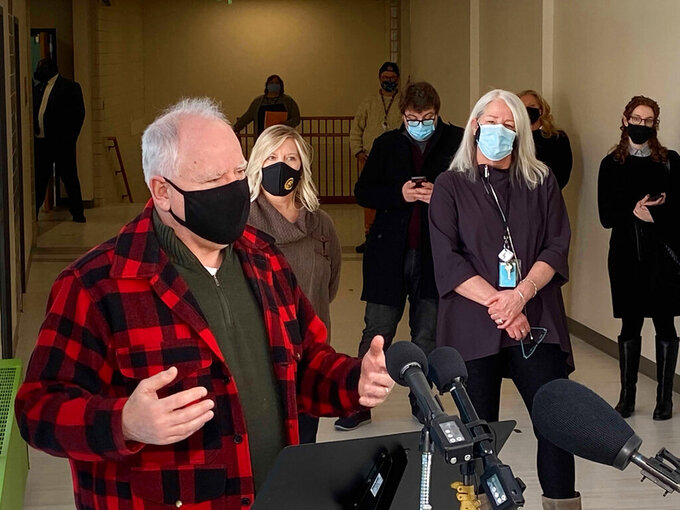 Minnesota Gov. Tim Walz speaks at a news conference on Friday, Feb. 12, 2021, during a visit to Parkview Center School to highlight a coronavirus testing program for educators. The Democratic governor on Friday announced the loosening of some restrictions on businesses, citing low positivity rates and increased vaccinations statewide.(Mohamed Ibrahim/AP/Report for America)

MINNEAPOLIS (AP) — The Minnesota Senate approved a renewed Republican attempt Thursday to rescind Gov. Tim Walz's emergency authority to close schools, a sign of the continuing deep partisan divisions over how state government should respond to the coronavirus pandemic.

The GOP-controlled Senate passed the bill 40-27, with four Democrats and two independents siding with Republicans, one day after the Democratic governor announced a plan to speed up the return of students to school for in-person classes.

The vote was largely symbolic. The Democratic-controlled House rejected a similar proposal last week, and has rebuffed all previous Republican attempts to revoke the executive powers that Walz has exercised under the peacetime state of emergency that he declared last March. Those efforts include a similar bill the Senate passed in July.

Walz on Wednesday said middle and high school students can return for hybrid or in-person learning starting Monday, if schools are ready and follow required safety protocols such as masking and social distancing. He expects all schools to offer some form of in-person learning by March 8. Lower grades at many elementary schools are already open.

The major decisions on the details of how to reopen and when, such as how many days per week, will be up to local school officials. Families can opt to stick with distance learning.

Republican Sen. Carla Nelson, of Rochester, the lead author of the bill, said the governor's plan didn't go nearly far enough. She said too many kids have been shortchanged, and it's time to return full control to locally elected school boards.

At a Senate GOP news conference beforehand, Kofi Montzka, a mother of three boys from Shoreview, said it's been close to a year since her 13- and 15-year-olds have had any in-person instruction, while her 16-year-old with special needs has had only around 10 days. She expressed fear that Walz could close schools again if the coronavirus resurges.

“What people need to recognize is that he can give and he can take away," Montzka said. "And that when he takes away, there's nothing we can do, no one we can petition to but him.”

Senate Democrats stressed during the heated debate that Nelson's bill does nothing to provide additional resources, such as staff and vaccines, or guidance to schools to help them reopen safely. They also noted that the major groups representing Minnesota school boards — the supposed beneficiaries — all oppose the bill. Senate Minority Leader Susan Kent, of Woodbury said the bill was about "trying to score political points against the governor," not reopening schools.

That drew a sharp rebuke from Nelson, who asked that Torres Ray's remarks be stricken from the record, noting that Senate rules of decorum that say members should not cast aspersions on the motives of their colleagues during debates.

“Members, we have started off on a rocky road this year, at a time when our constituents need us to work together on things that we can respectfully, and disagree when we must,” Nelson said.