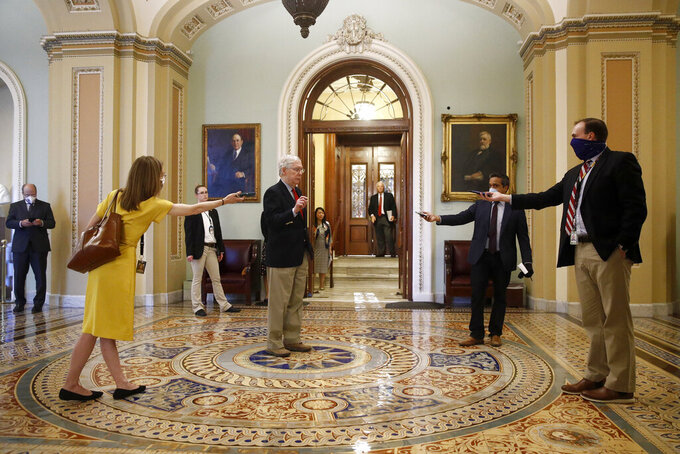 WASHINGTON (AP) — The Senate has twisted itself into knots over President Donald Trump’s new coronavirus aid request, as Democrats refused to rubber stamp his proposal for $250 billion more to boost small businesses, demanding modifications along with an additional $250 billion for health care providers and states. Republicans wouldn’t go along.

The standoff Thursday doesn’t end the pursuit of more rescue funds, but it came as the government reported that 6.6 million more people filed for unemployment benefits last week, increasing worries that the economy is sliding toward a severe recession. The small business program at issue is off to a rocky rollout.

GOP leader Mitch McConnell sought to keep Thursday’s debate limited to Trump’s request and wouldn’t accept Democratic additions. Even if the GOP plan had succeeded in the Senate, the Democratic-controlled House is determined to make changes to ensure small businesses in minority communities benefit from the burst of government funding.

Democrats and Republicans agree the aid is urgently needed and talks are sure to continue, but it reinforces that Congress and the White House will need to find bipartisan agreement — especially with lawmakers scattered in their states and districts and both the House and Senate unable to conduct roll-call votes.

“Nobody thinks this will be the Senate’s last word on COVID-19," McConnell said. “Let’s continue to work together, with speed and bipartisanship. We will get through this crisis together.”

House Speaker Nancy Pelosi declared the Senate vote merely a “stunt" as the country faces an “epic” crisis. She ridiculed the administration for trying to jam a $250 billion request through Congress with 48 hours notice with little data to back it up.

“Really?” Pelosi said on a conference call with reporters.

The stall comes as communities across the nation strain to meet health care needs and salvage local economies pummeled by the crisis. A new jobless report shows a whopping 16.8 million Americans are now out of work.

The massive infusions of federal cash — the $250 billion sought by the administration would come on top of combined legislation already totaling about $2.5 trillion -- are intended as a patch to help the $21 trillion U.S. economy through the current recession, which is causing an economic contraction and a spike in joblessness that is overwhelming many state systems for delivering unemployment benefits.

With Congress all but shuttered — and unlikely to return April 20, as planned — lawmakers pledged to keep negotiating with the White House.

McConnell and Treasury Secretary Steven Mnuchin say the “paycheck protection” program, which involves direct subsidies to companies to keep employees on payroll and pay company rent, is on track to quickly deplete its first $350 billion infusion as businesses rush to apply for the aid.

Democrats are not opposed to boosting the payroll fund, but they want to ensure that the new program delivers benefits to businesses in minority communities that are often under-served by traditional lenders.

“What the secretary requested and the bill that the Senate majority leader brought to the floor would never pass the House,” she said. “It is a basis for some negotiation.”

Sen. Chris Van Hollen, D-Md., accused McConnell of trying to ram through legislation and detailed a variety of glitches in the program, including fears that many big lenders are not serving minority neighborhoods.

Democrats are pressing for half of the White House request, or $125 billion, to be channeled through community-based financial institutions that serve farmers and family-, women-, minority- and veteran-owned small businesses and nonprofits in rural, tribal, suburban and urban communities.

They circulated a $500 billion plan that would include the Trump request and add $100 billion for hospitals and other health care providers and $150 billion to state and local governments, as well as a 15% boost in food stamp benefits. They hope this serves as a basis for talks with McConnell going forward.

With Capitol Hill virtually shut down, legislation is most easily passed through unanimous agreement, which is often not an easy task.

Another complication is lone wolf Republican Rep. Thomas Massie of Kentucky, who promises to block efforts to pass such huge legislation through the House without lawmakers present and ready to vote. The Senate is used to passing legislation by unanimous consent, but the House is more typically driven by the majority party imposing its will.

The future of the legislation is likely to be largely determined by a small, familiar group of senior Washington hands, including Pelosi, McConnell and Mnuchin, along with Senate Minority Leader Chuck Schumer.

Vice President Mike Pence convened another day of conference calls with lawmakers and the coronavirus task force, talking separately with Senate Republicans and Democrats, on the crisis and federal response.

The Senate convened for the brief pro-forma session with just four senators present — none in masks — to consider the dueling proposals.

Senate Sen. Roy Blunt, R-Mo., who presided over the brief session, told reporters it is “unlikely” the chamber will reopen April 20 as planned.