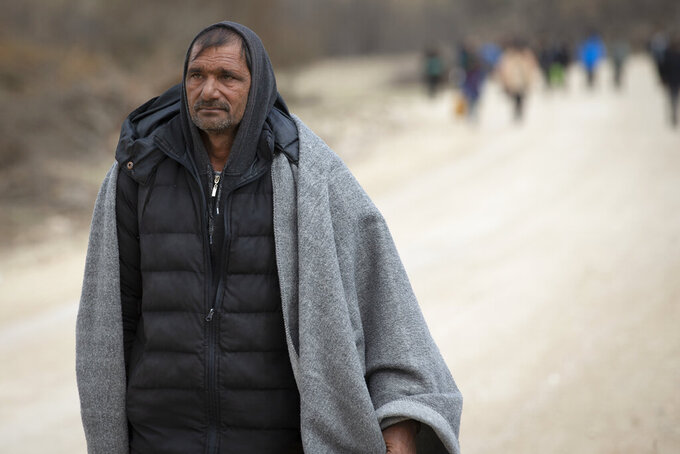 A migrant walks towards Croatian border in Lipa near Bihac, Western Bosnia, Wednesday, April 21, 2021. A senior U.N. migration official on Wednesday urged respect of international standards and an end to any abuse against migrants and refugees crossing borders while searching for a better future. The Chief of Staff of the International Organization for Migration, Eugenio Ambrosi, called on governments to correct any wrongdoing affecting people fleeing war and poverty. (AP Photo/Darko Bandic)

BIHAC, Bosnia-Herzegovina (AP) — A senior U.N. migration official visiting Bosnia on Wednesday called for an end to abuse against migrants and refugees trying to cross borders in search of a better future.

The Chief of Staff of the International Organization for Migration, Eugenio Ambrosi, spoke to the AP during a visit to the beleaguered Balkan nation that’s struggling under the influx of thousands of people trying to reach Western Europe.

Many migrants in Bosnia have complained of alleged violence and pushbacks when trying to illegally cross into neighboring European Union member country Croatia. The U.N. mission in Bosnia earlier this month cited an alleged incident involving 50 men who said they were pushed back violently and robbed of their belongings.

“We continue to think and hope that all the governments involved in this type of situation will carry out the necessary investigation and take the necessary action to correct the wrongdoing if and whenever it does happen,” Ambrosi said.

Ambrosi on Wednesday went to northwest Bosnia that borders Croatia, and where most migrants in Bosnia are staying. The delegation visited construction work for a new center for asylum seekers near the town of Bihac, where a temporary tent camp was burnt last winter leaving hundreds of people without shelter in freezing temperatures.

Laura Lungarotti, Bosnia IOM Chief of Mission, called for “a more solutions-oriented approach that goes beyond immediate reception and looks into” options such as assisted voluntary returns to migrants' countries of origin, or integration in local society.

The IOM in Bosnia has helped manage the official camps that host some 4,500 migrants, while hundreds more are believed to be sleeping in abandoned homes and make-shift tent settlements. In the past weeks, some of the camps were placed in isolation following a rise in infections with the new coronavirus.

Ambrosi urged access to health care and vaccination for migrants and refugees “because we have seen in this pandemic that nobody is safe until everybody is safe.”