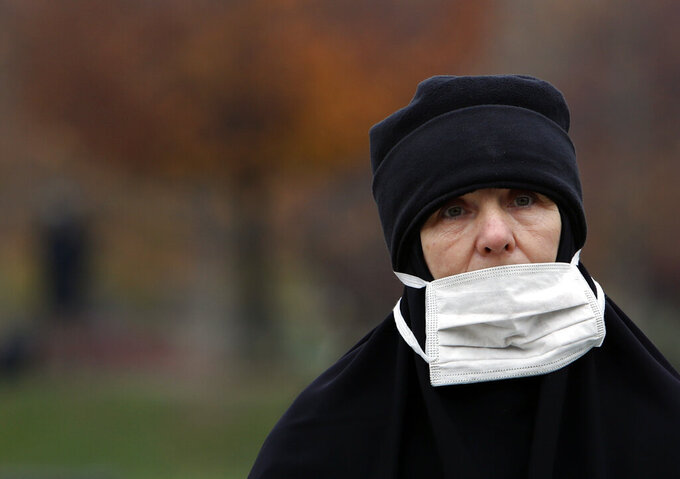 A nun stands in front of St. Sava Temple during the funeral procession of Patriarch Irinej in Belgrade, Serbia, Sunday, Nov. 22, 2020. The 90-year-old Irinej died early on Friday, nearly three weeks after he led the prayers at a funeral of another senior church cleric in neighboring Montenegro, who also died after testing positive for the virus. (AP Photo/Darko Vojinovic)

BELGRADE, Serbia (AP) — Thousands of people on Sunday attended the funeral of Serbian Patriarch Irinej who died after contracting the coronavirus, many ignoring preventive measures against the pandemic.

Many mourners and most priests holding the funeral service in the massive St. Sava Temple in the Serbian capital, Belgrade, didn't wear masks or adhere to social distancing inside the church, kissing the glass shield covering Irinej’s remains and even using a single spoon during Holy Communion.

Irinej, 90, died on Friday, three weeks after attending the funeral of another cleric in neighboring Montenegro in which mourners kissed his remains lying in an open casket although he also died from COVID-19 complications.

The Serbian Orthodox Church has asked mourners to keep their distance and wear face masks in line with the anti-virus recommendations, but even priests inside the temple were without masks. Serbian epidemiologists have said there was no way they could ban the traditional funeral prayers.

After reporting thousands of daily new cases of infections in the country of 7 million people, authorities have warned that the health system has been overburdened with hospitals running out of beds.

Patriarch Irinej wielded considerable political influence in the Balkan country. The patriarch was known for his criticism of Western policies in the Balkans and close ties he developed with the Russian Orthodox Church.

Serbia’s top leadership attended the funeral, including President Aleksandar Vucic, who spoke about Irinej’s legacy and praised his efforts to complete the construction of the St. Sava Temple, the biggest Orthodox church in the Balkans.

“I’m ready to say, if it wasn't for Irinej, it would have taken several more decades to complete this temple,” Vucic said.

Irinej was later buried in the crypt inside the temple.