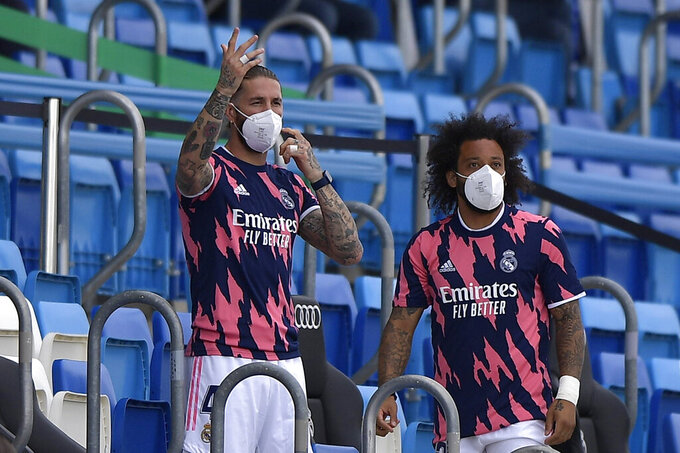 Real Madrid alternate players Sergio Ramos and Marcelo, right, watch from the stands during the Spanish La Liga last round soccer match between Real Madrid and Villarreal at the Alfredo Di Stefano stadium in Madrid, Saturday, May 22, 2021. (AP Photo/Pablo Morano)

An emotional Sergio Ramos said goodbye to Real Madrid on Thursday, saying he wanted to stay but the club preferred not to renew his contract.

Ramos said he initially wanted a two-year extension instead of the one year offered by the club, but eventually he accepted the one-year deal plus a salary reduction that was already planned. He said he and his representatives were surprised when the club said its offer had expired.

“Maybe I misunderstood, but no one had told me that the offer had an expiration date,” the former Madrid captain said. “In the last conversations we had, I said that I accepted the offer, but then they told me that there was no more offer.”

Ramos acknowledged he told the club to plan its future without him but only because he felt no one should be considered greater than the club in a negotiation, not because he wanted to leave.

“I never wanted to leave Real Madrid but many things happened," Ramos said. “To me, Real Madrid and Sergio Ramos was the perfect marriage, but things change in life and we have to accept it.”

Ramos still thanked the club and expressed his disappointment for not being able to bid farewell to the fans at the Santiago Bernabéu Stadium because of the coronavirus pandemic. The 35-year-old defender, who leaves as a free agent, said he is excited about his future but did not say where he will be playing next.

“This is the end of a unique and wonderful stage in my life,” said Ramos, who broke down in tears shortly after he started speaking. “And another stage is beginning, filled with hope and desire to show that I can still play at a high level for many years and win more titles.”

Madrid, one of the clubs struggling financially amid the pandemic, announced Ramos’ departure on Wednesday.

The player's family, including his wife and four children, attended the farewell event along with club president Florentino Pérez . A video was shown of Ramos playing and lifting trophies with Madrid.

“This is a difficult day for me as a president,” Pérez said. “It's been 16 years since you began one of the most spectacular trajectories in the history of our club. You will always be in the hearts of all Madrid fans.”

Ramos had been with the club since arriving from Sevilla in 2005 when he was 19. He helped the Spanish powerhouse win 22 titles, including four Champions Leagues and five Spanish leagues. His 93rd-minute header helped secure Madrid the European trophy in 2014.

Ramos and Marcelo are the players with the most titles in the history of the club other than former player Paco Gento. Ramos scored 101 goals in 671 matches with Madrid.

Ramos was left off Spain’s squad for the European Championship after playing sparingly this season because of a series of injuries. It was the first major tournament Ramos missed since he began playing with the senior squad in 2005.

The defender said he feels like he is injury-free and wants to return to the national team as soon as possible in future tournaments.