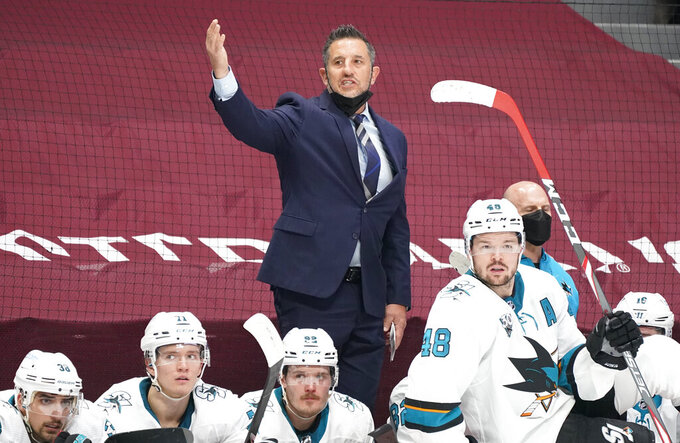 Wilson said there's no need to tear down and rebuild a franchise that was a perennial contender for most of the previous 15 years. He believes a few key moves could get the Sharks back to that level next season when they try to avoid their first three-year stretch ever without a playoff berth.

“I expect this to be a very good hockey team,” Wilson said. “I expect a team every year to compete for the playoffs. If we add the right things, players get back in their cycle, they’re able to do that. I think we’ll be a very good team next year. I really do.”

Despite a season that started with training camp in Arizona and the first 12 games on the road because of COVID-19 restrictions in San Jose, the Sharks managed to get into playoff contention with a four-game winning streak from March 29-April 3.

The season that went off the rails with nine losses in 10 games, including four on a five-game homestand against bottom dwellers Anaheim and Los Angeles.

“These past years have been very difficult to take. It's not fun losing,” captain Logan Couture said. “Disappointing but I think it should give us some motivation going into next year. We all know we need to be better to a man in that dressing room.”

Wilson said the priorities this offseason will be improving on goaltending that has been among the league's worst the past few seasons with Martin Jones handling the bulk of the load and adding a third-line center to take pressure off Couture and Tomas Hertl.

The Sharks could choose to buy out the final three years on Jones' contract with some veterans expected to be available before the expansion draft. Josef Korenar and Alexei Melnichuk also got some playing time late in the season and could be in the mix.

“We need quality goaltending to be successful in this league,” Wilson said. "We will explore all avenues to make that happen.

Burns’ 0.52 points per game were his lowest since his first season in San Jose in 2011-12 and Vlasic struggled early and was dropped to the third pair.

Karlsson finished with just 22 points and his points per game were barely more than half his career average. He has not played like the two-time Norris Trophy winner he was in Ottawa before being traded to the Sharks and signing a deal worth $11.5 million annually.

Karlsson will be 31 next season and Wilson said he believes he can regain his form with a strong offseason.

The highlight of the season for San Jose came on April 19 when Patrick Marleau broke Gordie Howe’s NHL games played record. That provided an opportunity to celebrate a player who became a face of the franchise during more than two decades in San Jose.

Marleau wants to keep going next season at age 42 but after only nine points in 56 games, it’s uncertain whether the Sharks will give him that opportunity.

“I feel like I still have a lot to give out there, a lot more than what happened this year for myself personally and points-wise,” Marleau said.

Evander Kane was the best player on the Sharks this season with 22 goals in 56 games despite going through a bankruptcy. Kane and the Sharks reportedly told a bankruptcy court they were considering voiding the final four years of his contract. Wilson said he expects Kane back next season.

"That is his personal choice how he handles that,” Wilson said. “I know he loves being here, he knows how supported he is, and for him to play the way that he’s played is his appreciation for the support that he’s received from all of us in the organization.”