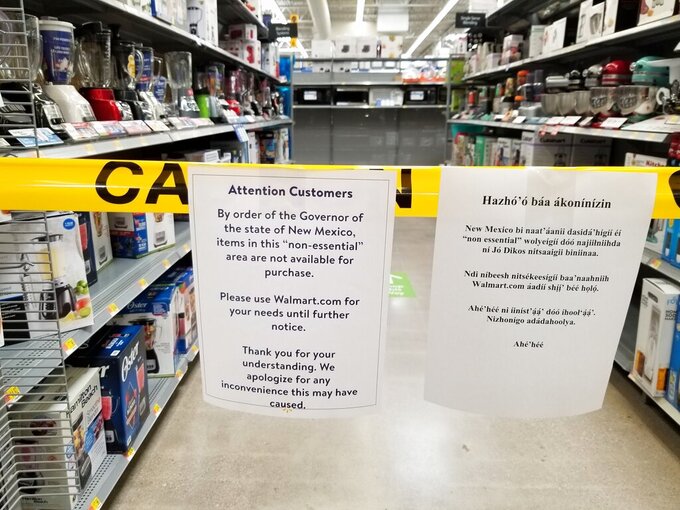 This photo provided by Patrick Sandoval shows signs inside the Walmart in Gallup, N.M., on Friday, May 1, 2020, to advise shoppers that non-essential items aren't available for purchase. (Patrick Sandoval via AP)

“We want to express our fears and frustrations regarding New Mexico Gov. Lujan Grisham’s public health order, a policy many in our state believe to be a blatant violation of peoples’ civil rights, liberties and their right to conduct free commerce,” Pearce wrote. “The situation in New Mexico is one that is unjust and inequitable.”

“The governor has been discriminatory in her policies, keeping big box corporate giants open — draining New Mexico dollars out of state — while shutting down mom and pop locally owned establishments,” Mase wrote. “This is not only preferential treatment for the big box stores but a violation of the civil rights of our small business owners whose livelihoods are now in free fall.”

In an interview with The Associated Press, Pearce said he wanted Barr to look at New Mexico to see if the U.S. Constitution “is be respected” during the health order.

Under a health order issued late March, state officials told all nonessential businesses to close their doors. First-time lockdown offenders can be given warnings, second citations for the same offenders are petty misdemeanors with a fine of up to $100, and third-time violators can be fined up to $5,000.

The health order has been extended to May 15. Lujan Grisham said the order will be lifted in phases.

Gallup, a popular supply stop for rural residents of the nearby Navajo Nation, has been on lockdown for nearly a week. Residents were ordered to stay at home except for emergencies.

State health officials on Sunday reported more than 4,600 positive tests of the virus in the state. More than 200 people are hospitalized and 181 have died.

McKinley County in western New Mexico is the county leading the state with the highest number of cases despite its small population. It includes parts of the Navajo Nation, which has some of the highest infection rates in the country.