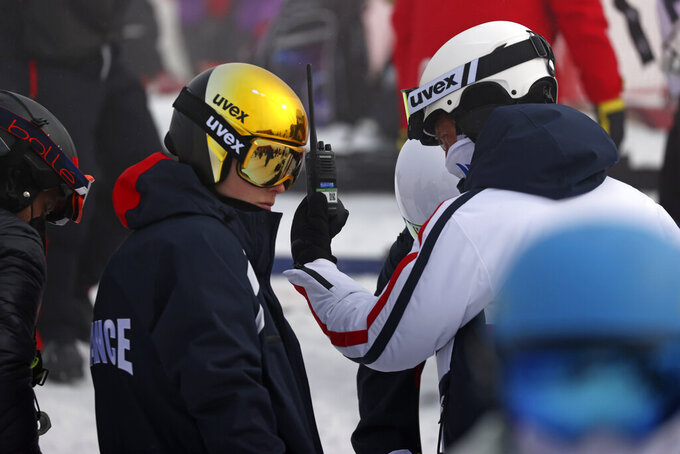 A French ski team coach holds a two-way radio ahead of women's downhill training at the 2022 Winter Olympics, Saturday, Feb. 12, 2022, in the Yanqing district of Beijing. Mikaela Shiffrin and other Alpine skiers at the Beijing Olympics get help from coaches and teammates who offer course reports before races. Those reports are usually given via two-way radios and offer a mix of information and motivation. Racers can get insights into the speed of a course or the conditions of the snow that day. Or they might be told how other racers are dealing with certain turns or jumps. (AP Photo/Alessandro Trovati)

BEIJING (AP) — When Mikaela Shiffrin pushes out of the starting hut for the first Olympic downhill of her career on Tuesday, she will do so with a mind filled with all manner of insights — from taking training runs; from watching videos; from that morning’s chance to slowly inspect the hill, gate by gate; and, particularly right before racing, from things passed along by U.S. coaches or teammates via two-way radio.

Those radio reports, often called course reports, offer a mix of information and motivation and constitute a key part of how Alpine skiers get ready to throw themselves along slick slopes at speeds that can top 75 mph (120 kph) at World Cup and Winter Games events.

It’s not exactly the same timing or setup, but think of it as similar to the way an NFL assistant coach communicates with a quarterback through a one-way speaker between plays or a NASCAR driver receives radioed instructions from a crew chief throughout a day’s trip around an oval.

In ski racing, the reports can offer a new perspective just before the clock starts running.

Shiffrin calls it “invaluable” for her, especially in the downhill, where she has less experience than in her specialties of slalom and giant slalom.

“It’s just about listening and processing it without overthinking, because that also makes it hard if you stiffen up,” the two-time Olympic gold medalist from Colorado said after Monday’s second downhill practice session. “It’s so awesome to talk through the track with the coaches and the other girls, as well. We’ve had quite a bit of discussion about how certain places run and what we think is the line. I tend to shoot for a little more aggressive line in some spots, and today I kind of found out I need to give a little more to get more afterward.”

Some racers swear by course reports, which can address such things as the speed and condition of the snow, the way certain turns or jumps are presenting themselves, how parts of the course might be bathed in light or shrouded by shadows. And on and on.

Some find the whole exercise a bit unnecessary.

“Me, personally, I like to have as (little) noise as possible, so I don’t take that much. But I give a lot," Norwegian racer Lucas Braathen said. "Some teammates, for sure, they totally rely on it. For many, that’s very crucial.”

Some prefer to hear from coaches, who might climb a tree or prop themselves on a rock adjacent to the course for a better view of the fastest route.

Some prefer to hear from a specific teammate with whom they’ve built a rapport.

For American Bode Miller, whose six Olympic Alpine medals are tied for second-most in the sport’s history, that teammate was Daron Rahlves.

“We spent a lot of time and energy developing the proper vocabulary and understanding of what the other person meant or needed," Miller said. "In my case, it was primarily the athletes and their reports that helped me — or when they were missing, I was feeling that they were missing.”

That’s why Swiss racer Marco Odermatt’s first-run work was not quite done after he cut through the haze of fog and snow to ski across the finish line with the fastest opening leg in the men’s giant slalom Sunday.

He found a member of Switzerland’s staff and used her radio to deliver a message to skiers whose trips down the slope were yet to come.

“I just tried to tell my friends up there they have to fight,” Odermatt said after earning a gold medal. “‘The feeling is bad. You just have to push and fight, fight, fight until the very last gate.’”

Atop the hill, racers can watch what's happening on TV. That allows them to get some sense of how things are going.

Still, there’s also something to be said for hearing a first-hand account, particularly on a day like Sunday, when visibility was nil.

It was tough to see ahead beyond the upcoming gate, hard to pick up ruts or other potential obstacles under the freshly fallen flakes underfoot.

“You don’t really have a good sense of how it skis until you talk to someone who’s been on it or you’re on it yourself,” said U.S. skier River Radamus, who finished fourth behind Odermatt. “I tried to convey to the guys that the top section pulls a lot more than it looks, swings up, and then that whole middle section was a lot straighter, a lot easier, than I think we saw in inspection."

Sometimes smaller teams will share reports with each other.

Part of the calculus for coaches is also whether it might be better to not pass along every tidbit and overload a racer’s head just before a run begins.

“If you are talking about something that’s going to happen in the last five gates of a course, then you still have to get through the first 45 gates of the course to get there," said Mike Day, Shiffrin’s main coach with the U.S. ski team. "So is that going to be in her head the entire time?”

At Shiffrin’s first World Cup appearance this season, in October, Day noticed that a late turn in the second run of a giant slalom was giving a lot of racers trouble.

Set up toward the bottom of the slope so he could scout it and offer help based on what he saw as other athletes zoomed by, Day considered relaying this to Shiffrin.

“Decided not to. And she ultimately executed fine in that section. When those additional reports come, they can be stressful for a racer,” Day said. “It’s not easy to hear something that you weren’t expecting to hear or even a reminder about something that you already talked about.”

“She is so intuitive and clever with how she approaches racing,” Day said. “When we’re giving a course report, it’s less about specific elements of the course and more about firing her up and making sure that she feels 100% confident and ready to go.”