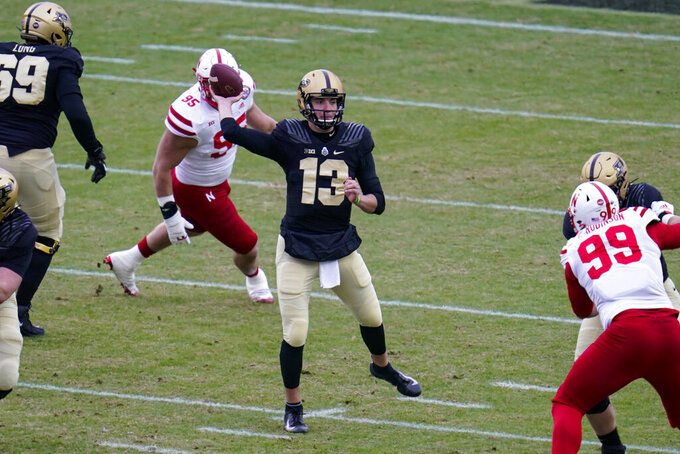 The Purdue Boilermakers have taken their hits from almost every conceivable corner this season.

Last week, Brohm said at least five players had opted out of the rest of this season while another, receiver Amad Anderson, had entered the transfer portal. More bad news came Monday when Brohm said Antonio Stevens (knee surgery) and Jalen Graham (illness) would miss Saturday's rivalry game at No. 8 Indiana.

Now even that game could be in jeopardy: Purdue canceled Tuesday's practice to “evaluate the recent results of COVID-19 testing." Indiana also announced it has paused all team-related activities due to an increase in COVID-19 cases within the program.

Despite all the obstacles and all the frustrations, Brohm remains encouraged by one thing — Purdue's ability to fight back.

“I do like the fact our guys have been playing hard," he said. “They have been practicing well. We have had a chance in every game to win. But all of us haven’t done our part to get to the level we need to in order to win close football games. Those are the things you’ve got to learn from, you’ve got to identify them."

Since winning their first two games in October, the Boilermakers (2-4) have endured the cancellation of the Wisconsin game in Week 3, followed by four straight losses with a total scoring margin of minus-24.

Next up is Indiana (6-1), one of college football's biggest surprises. With a win, the Hoosiers can wrap up their first undefeated home season since 1991, break the single-season school record for most conference wins and likely break a tie with the 1945 Big Ten title team for most consecutive weeks in the Top 25 (seven).

After winning the Old Oaken Bucket in his first two seasons in West Lafayette, before giving it back to Indiana following an overtime loss last season, Brohm has a pretty good notion of what Purdue must do to reclaim the prized trophy.

“When you play in the Big Ten, you have to play at a high level each and every week to win, and we have not done some of the small things in these games to give ourselves a chance," he said. “We’ve dug some holes and we’ve had some big miscues that have hurt us."

Brohm continues to prepare as best he can for the Hoosiers. He has a reputation for emptying the playbook, as Indiana defensive coordinator Kane Wommack noted. He might play Jake Plummer and Austin Burton, the grad transfer from UCLA who nearly replaced Plummer after last weekend's slow start, at quarterback.

But what Brohm really wants to see is the Boilermakers come out swinging.

“I want to see coaches and players that want to compete and show some fight and that want to do everything in our power to get the Bucket," he said. “We need to put in the work, build up the inner anger so when you take the field you’re ready to compete and fight for the win."