Shut out for 9 months, fans back at top-level English soccer 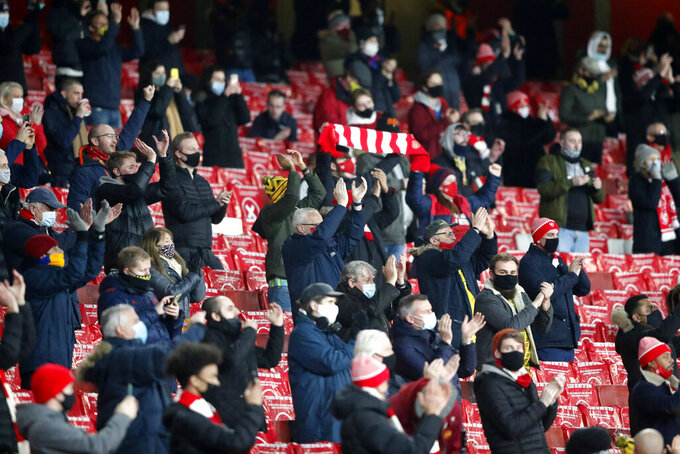 Soccer fans applaud as the teams enter the pitch for the Europa League group B soccer match between Arsenal and Rapid Wien at Emirates stadium in London, England, Thursday, Dec. 3, 2020. (AP Photo/Frank Augstein)

LONDON (AP) — Sitting apart but united in melody, Arsenal supporters restored a semblance of normality to an English stadium.

Even the customary chanting against their north London rival — “Stand up if you hate Tottenham” — was back.

The fans had waited 271 days to return to the Emirates Stadium, and to see Alexandre Lacazette run over to celebrate in front of them. Just as he did against West Ham in March, Lacazette scored first in a 4-1 win against Rapid Vienna in the Europa League on Thursday night.

“It was amazing,” Lacazette said. “It really helped us during the game. Even in bad moments they pushed us.”

The lucky 2,000 fans inside Emirates Stadium were the first spectators allowed into a top-level competitive game in England since March 11 — the day the coronavirus was declared a pandemic by the World Health Organization. Sports then shut down and stadiums were closed to spectators once competitions eventually resumed.

Britain is an outlier in Europe. It's had the most coronavirus deaths on the continent, with the total going over 60,000 with another 414 in the day before the Arsenal match. But it is the first of the major nations to allow supporters back into football games during COVID-19's second wave.

Arsenal fans Steve Manzanero recovered from the coronavirus last month — “it was pretty nasty” — but sees fans returning as a necessary part in the reopening of society.

“Listening to our team, our players trying to play without any of the fans roaring has been the worst,” Manzanero said.

Fans are being urged to wear masks, avoid high-fiving and hugging as part of social distancing. Curbing that singing will be harder to do.

“I’m screaming my lungs out,” Manzanero said. “If I’m not hoarse by the time I go back to work tomorrow then we haven’t had a good time."

Arsenal's former stadium Highbury was often mockingly called “The Library” by rival fans over a lack of atmosphere. The few fans allowed in on Thursday night certainly made sure they were heard — and showed the lockdown hadn't dampened the humor.

“You’re not signing any more,” they serenaded the nonexistent away fans after Eddie Nketiah scored Arsenal's third.

For now, only home fans are being allowed into stadiums. So only the Tottenham faithful will be at the derby against Arsenal in the Premier League on Sunday.

And while London stadiums are allowed 2,000 fans because the capital is subject to the second tier of coronavirus restrictions after England's second lockdown ended earlier this week, half the Premier League grounds — including in Manchester — are in tier three areas so cannot have any crowds yet.

“This sport without fans is completely different,” Arsenal manager Mikel Arteta said. “Everything is flatter, the players lose a little bit of purpose and emotion. It is something that you want to share."

Arteta had become so accustomed to empty stadiums that, at one point during the game, he was slow to react when fans asked him for a wave.

“It makes a huge difference," Arteta said, “to feel that support and energy from them.”

Lewis Bones missed out on a ticket but still came to savor the return of a flicker of an atmosphere returning outside the Emirates.

“I need it like oxygen — taking football away from us with all the COVID-19 has been killing us as fans,” the 33-year-old Bones said. “Without a crowd, football is nothing."

Ben Weeden felt safer coming back into his Arsenal seat than going to the supermarket.

“It's been a hole. It's not the same the excitement you get when it's a game day, getting the train, the walk here, the buzz," the 31-year-old Weeden said. “You miss it and I don't think you realize how much you miss it until you can't do it.

“For mental health reasons, it's a distraction sometimes for some people. It's going to bring people together again, at a time when we need it."

At the final whistle, it also brought the fans and players together again as the Arsenal squad went over to applaud the crowd.

“It's great to see you, to hear you back," the stadium announcer said.