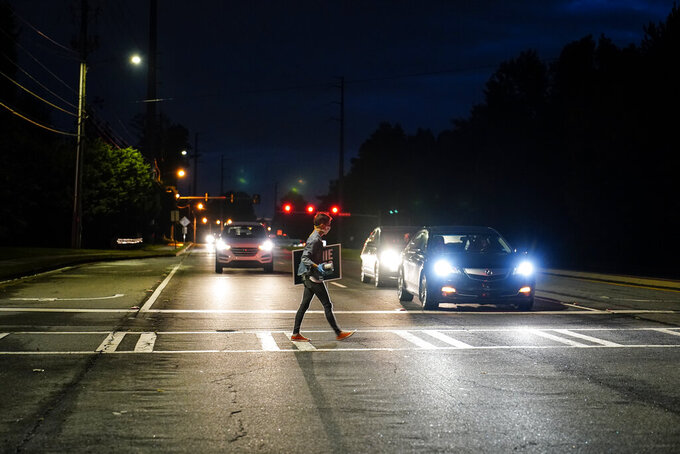 Georgia State Representative and Democratic candidate of District 44, Connie Di Cicco, walks with a campaign sign across the street on Sunday, Oct. 11, 2020, in Marietta, Ga. Calling themselves sign ninjas, a group of people, including Di Cicco, routinely gather to trade and assemble campaign signs around their districts for local elections in Georgia and then venture out in the dark to install them along main thoroughfares. (AP Photo/Brynn Anderson)

MARIETTA, Ga. (AP) — With Election Day fast approaching, the sign ninjas have only a few nights left to take action.

They work best after the sun sets, gathering to trade and assemble campaign signs and then venturing out in the dark to install them along main thoroughfares. For weeks now leading up to Nov. 3, they've been planting signs across their districts, and then returning to do it again each time they get stolen.

Connie Di Cicco has been putting up election signs for three years in Cobb County, Georgia, first helping with Democrat Jon Ossoff’s campaign for Congress in the 2017 special election.

This time, it’s her name on the signs. Di Cicco, who’s running to represent Georgia’s 44th House District, says she likes the idea of residents waking up to see signs blanketing their neighborhoods.

“When you see a sign, I think that that’s almost like a little nametag,” she said. “It’s a great introduction to a candidate.”

Knocking doors and meeting residents was what Di Cicco looked forward to most when she decided to challenge Republican state Rep. Don Parsons.

The coronavirus pandemic changed her plans.

“Putting up signs in light of COVID is essential,” Di Cicco said. “It helps people to know they have a neighbor who is a Democrat, that there’s a Democrat running and that there’s somebody who’s challenging an incumbent.”

One night, Di Cicco planted 25 of her signs throughout her district. They were all gone when she returned the next day.

Now, she coats the signs in a mixture of Vaseline, glitter, and sometimes even cayenne pepper – a sticky combination she describes as “really unpleasant” – to deter people from taking them.

Other activists have resorted to more extreme measures: In Michigan this month, someone taped razor blades to the bottom of a Trump 2020 sign, slicing the fingers of a worker tasked with removing signs planted illegally too close to a roadway, the Oakland County Sheriff's office said.

Di Cicco explains that each of her signs cost about $4 and they're funded by donors, so she feels an obligation to keep them up.

“We are doing our best, our damnedest to get our name out there,” she said. “On Nov. 4, there will not be a single regret that we didn’t do every single thing that we could to win this election.”