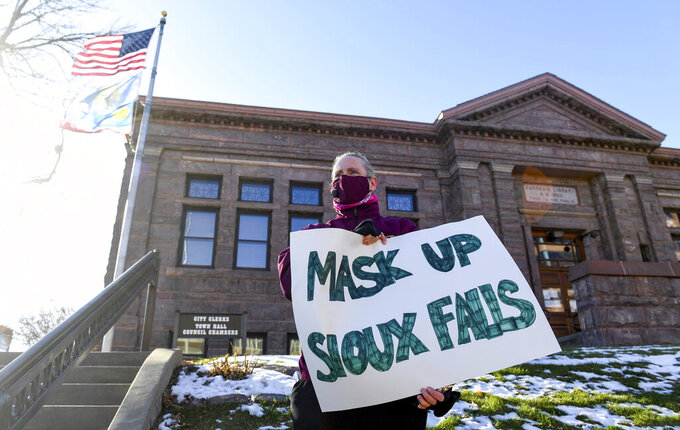 The Sioux Falls City Council voted 6-2 to approve the measure Tuesday night. But the council said violations of the requirement, which applies to retail businesses and public buildings, will not carry any penalty.

Sioux Falls Mayor Paul TenHaken, who cast a tie-breaking vote against a mandate last week, said prior to Tuesday night’s vote that he was ready to get behind the requirement after the state’s largest physicians’ organization and a hospital system came out in support

But the council said violations of the requirement, which applies to retail businesses and public buildings, will not carry any penalty.

Councilor Greg Neitzert, who voted against the ordinance, told the audience that his “yes” votes on amendments were to make the ordinance “as weak and ineffectual as I can” in case it passed and should not have been taken as a vote of support. “I want to neuter this,” he said.

He warned that the ordinance would be toothless and an empty gesture.

“We're going to put this in place, and it's not going to work,” Neitzert said before the vote.

Gov. Kristi Noem opposes mask mandates or other government interventions aimed at slowing the spread of infections. Cities across the state have moved to pass their own mask requirements. Huron and Mitchell issued requirements this week. Brookings has had one in place since September. And Rapid City Mayor Steve Allender pressed for a mask requirement ahead of Thursday's City Council meeting.

South Dakota's COVID-19 deaths per capita in recent weeks have been among the worst in the nation, but the Department of Health did not report any new deaths on Tuesday. Just over 1,000 people tested positive for the coronavirus, and the number of hospitalizations increased to 582 people, pushing some facilities close to capacity.

“We are really at historical levels,” said Dr. David Basel, vice president for clinical quality at Avera Medical Group. “Pretty much across all of our hospitals, they are at as high a level as they’ve been at any point in the last 25 years.”

Avera has doubled the number of ICU beds it has available, including putting two patients in some ICU rooms. Basel said the hospital system is also monitoring more than 1,000 COVID-19 patients through home care, including about 160 who are receiving supplemental oxygen. He said Avera has just 11 ICU beds available statewide.

“I know the public is tired of hearing about masks, but until we increase the masking that we are doing, we won’t be able to get this under control," he said.

TenHaken said he hopes to make the city's mask requirement part of a broader effort to control infections, especially as the holidays approach and people are more inclined to gather indoors.

Meanwhile, the Rapid City area school district is closing all schools and moving to virtual instruction because of the coronavirus surge. The district’s latest data shows 94 students and 47 staff have an active case of COVID-19 while 105 staff and 676 students are in quarantine following exposure.

The school district sent an email to families Monday night saying distance learning for its 25 schools will begin Wednesday. The district will provide take-home meals, the email said. The COVID-19 team will continue to meet through the Thanksgiving break and update families after the holiday about whether the district will reopen schools, the Rapid City Journal reported.

Representatives from the state’s largest hospital systems have urged people to avoid large gatherings during upcoming holidays, but offered encouraging news that vaccines and other COVID-19 treatments are being developed.

“Things are going to turn for the better, but we just need to get through the next few months,” Dr. Allison Suttle, Sanford Health’s Chief Medical Officer, said.