Slaying at US judge's home raises concern about cyberthreats 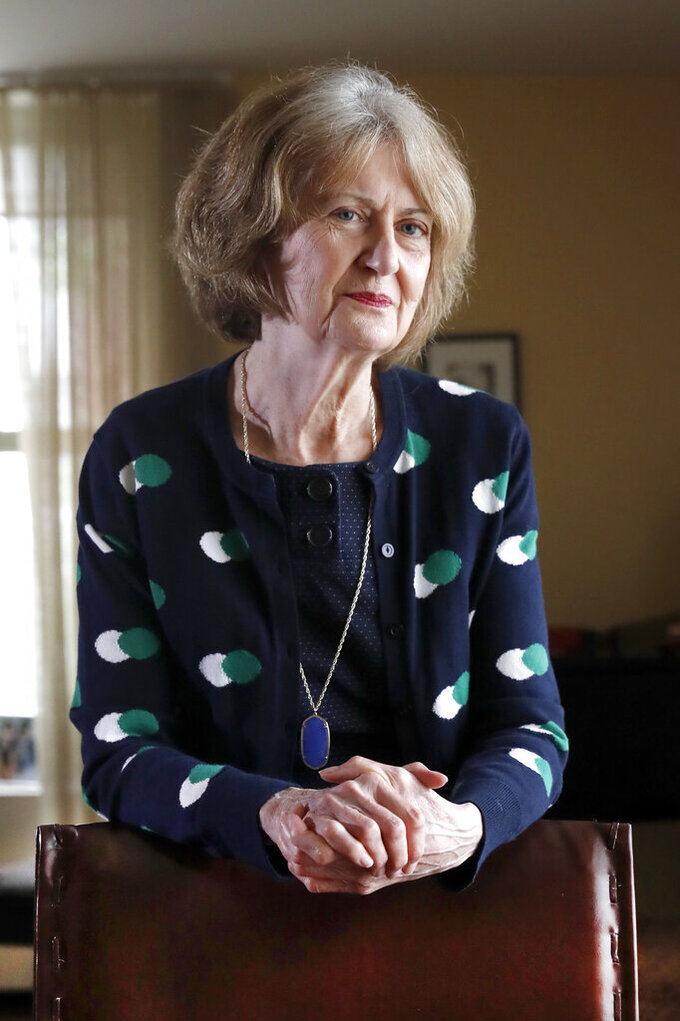 Senior U.S. District Judge Joan Lefkow, poses Monday, July 27, 2020, for a portrait in her Chicago home. In 2005, Lefkow returned from work to find her husband and mother shot dead in the basement of her Chicago home. Lefkow was forced to relive her family tragedy this month when a struggling lawyer armed with a gun and a grudge opened fire at the home of another female judge. (AP Photo/Charles Rex Arbogast)

PHILADELPHIA (AP) — In 2005, U.S. District Judge Joan Lefkow returned from work to find her husband and mother shot dead in the basement of her Chicago home. Investigators initially focused on a White Supremacist who had put out a hit on Lefkow.

But the killer turned out to be someone they'd never suspected: a homeless electrician who had lost a medical malpractice suit in her courtroom. He killed himself when police pulled him over a week later — and found a list of enemy judges, including Lefkow, in his van.

Lefkow was forced to relive her family tragedy this month when a struggling lawyer armed with a gun and a grudge opened fire at the home of another female judge — U.S. District Judge Esther Salas in suburban New Jersey — killing her 20-year-old son and critically wounding her husband.

“It seems to me it’s almost always men, with these obsessions. They act on on them in violent ways. And it ends up in (these) tragedies,” Lefkow, 76, told The Associated Press.

Both attacks, like others against judges, were carried out by men with a weapon and a vendetta. And in both, the assailants were not on law enforcement's radar. But the latest case adds a dangerous new twist that authorities nationwide have struggled to thwart until it's too late: the vast misogyny that proliferates online.

Investigators have concluded that a Manhattan lawyer who seethed about women in obsessive online posts targeted Salas on July 19 — and killed a rival lawyer in the men's rights movement in California a week earlier — before killing himself in rural New York.

Roy Den Hollander had a lengthy dossier on about a dozen female judges from across the country — half, including Salas, Latina — with him when he was found dead, two people with knowledge of the investigation told the AP. They spoke on condition of anonymity because they were not authorized to speak publicly about the case.

Den Hollander’s anti-feminist screeds go back at least 20 years, when his divorce from a Russian woman he met during a work stint in the country led to years of court filings against her, her lawyer, her workplace and others.

“It was rage against women and it was palpable," said lawyer Nicholas J. Mundy, who represented Den Hollander's ex-wife. “If they were successful or had any power over him, he just had a hatred for them, a deep hatred. He would seethe.”

In the years since, the 72-year-old spewed vitriol and sometimes violent imagery about women on his website — deriding his late mother, his ex-wife, friends from childhood and “feminazi” judges in a nearly 2,000-page rant.

The obsessive, unfiltered posts, discovered only after his shooting rampage, alarm those who believe law enforcement must do more to flag the dangerous combination of misogyny, guns and online abuse.

“I’ve been very rattled," said New York lawyer Carrie Goldberg, who represented some of Harvey Weinstein's alleged sex assault victims, and has been the subject of frequent online harassment. “There was so much public indication by this man of his hatred toward women, his love of guns, and his particularized angst toward Judge Salas."

Yet the U.S. Marshals Service, which protects the nation's approximately 2,700 federal judges, said they were not tracking Den Hollander. Marshals typically keep watch over judges in their courthouses. At home, where many have worked during COVID-19 quarantines, judges mostly rely on training and alarm systems installed after the Lefkow attack.

“Many judges are good at being security minded. But it’s not for everybody. And it’s tough to stay in that condition all the time. Guards go down,” said John Muffler, a former U.S. Marshal who led the agency's National Center for Judicial Security.

In the wake of the Salas attack, some federal judges and legal scholars interviewed by the AP called for the U.S. Marshals Service to spend more time monitoring such online hate speech. That's complicated by both the expanse of the internet and the thorny question of when criticism protected by the First Amendment becomes a threat.

The Marshals Service said it reviewed more than 1 million “derogatory” social media posts aimed at people it protects during the last fiscal year. However, feminist scholars and activists believe that misogynistic threats are overlooked and under-prosecuted because there are so many of them.

“This is a person who’s been fantasizing about killing women for years,” said Mary Anne Franks, a University of Miami law professor. “If you have left a paper trail like this, you shouldn’t be allowed to get a weapon.”

Den Hollander's dossier also included a female oncologist thought to have treated him for what he described in his posts as terminal cancer. The illness apparently led him to step down last year from a gender bias case he had pending before Salas, in which he challenged the U.S. military's male-only draft registration requirement. Salas let the case proceed to trial — but Den Hollander thought she'd moved it along too slowly.

Muffler believes the cancer diagnosis, if true, was likely the trigger for Den Hollander to act on his revenge fantasies. As with the assailant in the Lefkow case — who had lost his home — it was the final straw.

Attacking a judge “is their way of shifting control back to themselves," said Muffler, now a security consultant.

While threats against federal judges are increasing, and number some 4,400 a year, physical attacks remain rare, according to the U.S. Marshals Service. But when it happens, Muffler said, it's usually deadly.

Lefkow thought of resigning after losing her loved ones, but she had a family to support, including two daughters still living at home. And the law, she realized, was her calling.

“It ripped the family apart, but you go forward. And do what you have to do,” said Lefkow, who says she sent a letter expressing her condolences to Salas last week.

“I mean, it’s tragic for this family," she said. “Losing your only child, that’s the worst thing that can happen.”