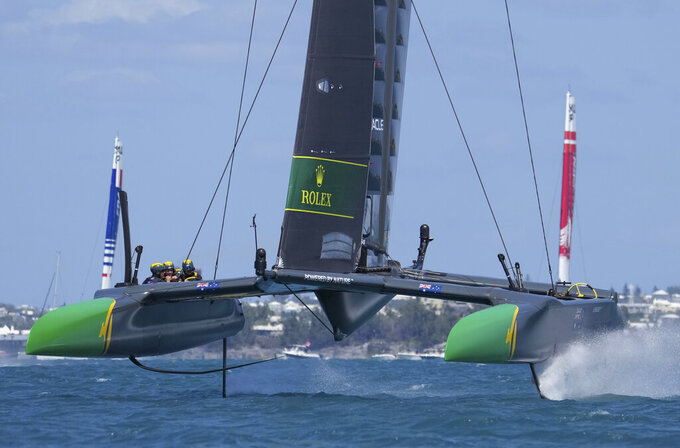 In this photo provided by SailGP, Australia SailGP Team helmed by Tom Slingsby competes during the Bermuda SailGP in Hamilton, Bermuda, on Friday, April 23, 2021. Slingsby and defending champion Team Australia won all three fleet races Friday on Bermuda's Great Sound in an impressive performance on the first day of the second season of the SailGP global league. (Thomas Lovelock/SailGP via AP)

Skipper Tom Slingsby and defending champion Team Australia won all three fleet races Friday on Bermuda’s Great Sound in an impressive performance on the first day of the second season of the SailGP global league.

Slingsby had his doubts after not having raced in 14 months due to a pandemic shutdown. But he had strong starts in all three races aboard his 50-foot foiling catamaran in the eight-boat fleet to take a big lead heading into the final day Sunday.

Slingsby, a former America’s Cup winner and an Olympic gold medalist, picked up where the first season ended in 2019, when the Australians won the championship and the $1 million winner-take-all purse.

Season two had started in late February 2020 with a regatta in Sydney dominated by newcomer Sir Ben Ainslie of Britain. But those results were voided after the season was postponed by the coronavirus pandemic.

While two other SailGP newcomers, U.S. skipper Jimmy Spithill and New Zealand skipper Peter Burling, were focused on their America’s Cup campaigns in New Zealand, Slingsby and his crew were riding out the pandemic in Australia.

“It was amazing to get out on the race track. It was windy, it was pretty wild,” said Slingsby, who added that it was a perfect way to settle into the new season.

“We had some doubts heading into the season,” added Slingsby. “We hadn’t been performing amazing in training, so it’s good to sort of silence those thoughts and know that we’re still talented, we’ve got the skills to win and we’ve just got to perform when we have to.”

A week earlier, the Australians capsized the American boat during practice while waiting for their boat to be commissioned.

The first three races were moved up a day because Saturday’s forecast was for light wind. Friday’s racing was in 18-20 knots of wind.

Billy Besson helmed France to finishes of 2-4-4 and Nathan Outteridge steered Japan to finishes of 3-2-5. The reconfigured U.S. team skippered by Spithill went 4-6-3.

Spithill was second in the close first race before Ainslie cut him off at the top mark and drew a penalty. Australia got a split and worked around to the win and the U.S. boat couldn't climb back up.

In the third race, Australia and Britain had a match race at the front of the fleet. They split at the top gate, with the Aussies boxing out an opportunity for the British to pass and extending on the downwind leg to sweep the day.

Ainslie skippered the British boat to finishes of 7-7-2. Burling, a month removed from successfully defending the America's Cup, steered New Zealand to finishes of 6-8-8. The New Zealand crew had minimal practice time in its new boat.

“We’re basically sitting mid-fleet, which is where we deserve to be,” said Spithill, a two-time America's Cup winner. “It was just one of those days where a few inches here or there we could have definitely been further up the leaderboard. But we’ve got to keep it in perspective because ourselves and the Kiwis have got very, very little time on these boats and on a day like today that definitely shows.”

The foiling 50-foot catamarans are an updated version of the boats that were used in the 2017 America’s Cup on the Great Sound, when Burling skippered Emirates Team New Zealand to a dominating win against Spithill’s Oracle Team USA.

Because the schedule was moved up a day, Friday's races will be shown on tape delay Saturday in the originally scheduled broadcast window.