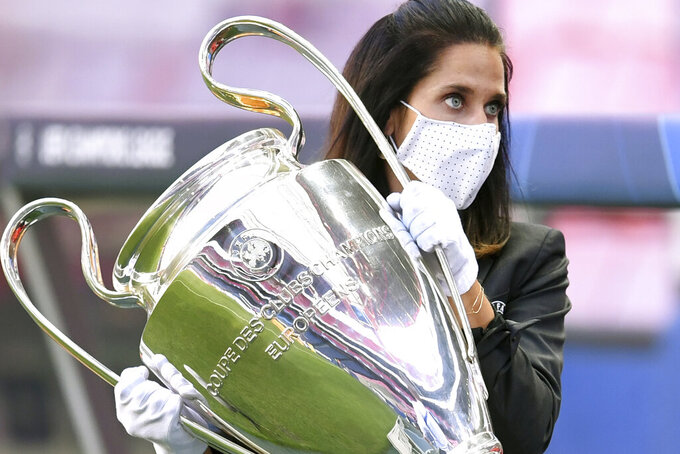 GENEVA (AP) — The champion of Slovakia on Monday became the second team to be removed from the Champions League qualifying rounds after players tested positive for COVID-19.

UEFA said its appeals committee made an urgent ruling that Slovan Bratislava must forfeit its first-round qualifying game against KÍ Klaksvík as a 3-0 loss after it was twice postponed in the Faeroe Islands last week.

Public authorities in the Faeroes had put two separate squads of players from Slovakia into quarantine because of positive tests by individual members of the visiting club’s group.

UEFA competition rules during the pandemic give authority over COVID-19 cases to local health officials who can effectively stop a game being played.

The UEFA rules are being tested as teams from 55 countries begin to compete in qualifying games through September.

AC Milan, Tottenham and Benfica are among teams set to play single-leg elimination games next month in a tight schedule with few options to rearrange if players or officials test positive.

Slovan said at the weekend it wanted to appeal against any UEFA ruling and could seek an urgent decision from the Court of Arbitration for Sport.

However, Slovan's intended opponent KÍ has now advanced to play on Wednesday in Switzerland, against Young Boys in the second qualifying round.

Slovan official Ivan Kmotrik Jr was quoted on the club’s website suggesting local officials in the Faeroes tried to ensure the game would not take place.

Just two weeks into a seven-week qualifying program for the next Champions League and Europa League competitions, three teams from two UEFA federations have had to forfeit their games.

All three teams were drawn away from home in locations where virus cases are managed by public officials; the Faeroe Islands, Switzerland and Gibraltar.

Neutral venues are an option if a country's pandemic situation means it cannot stage games organized by UEFA, whose president has identified a potential problem.

If governments or public officials overreach their authority to prevent games, UEFA head Aleksander Ceferin told The Associated Press on Sunday, "then we will have to think that the teams from those countries will have to play on a neutral ground.”

Kosovo league title winner Drita went out of the Champions League when it was prevented by authorities in Switzerland from playing a preliminary round game at a stadium next to UEFA’s headquarters. Two players had tested positive ahead of playing Northern Ireland’s Linfield.

On Monday, UEFA removed a second Kosovan team, Prishtina, from the Europa League preliminary round.

Multiple members of the Prishtina delegation, including around 10 players in squads who arrived on two different flights, tested positive and were put into quarantine in Gibraltar last week. The club had made emergency loans of players from other clubs to fulfil the UEFA fixture.

Prishtina’s game against Lincoln Red Imps was twice postponed, leading UEFA to declare a 3-0 win to the home team.

Lincoln Red Imps should now host Union Titus Pétange of Luxembourg on Thursday in the Europa League first qualifying round.