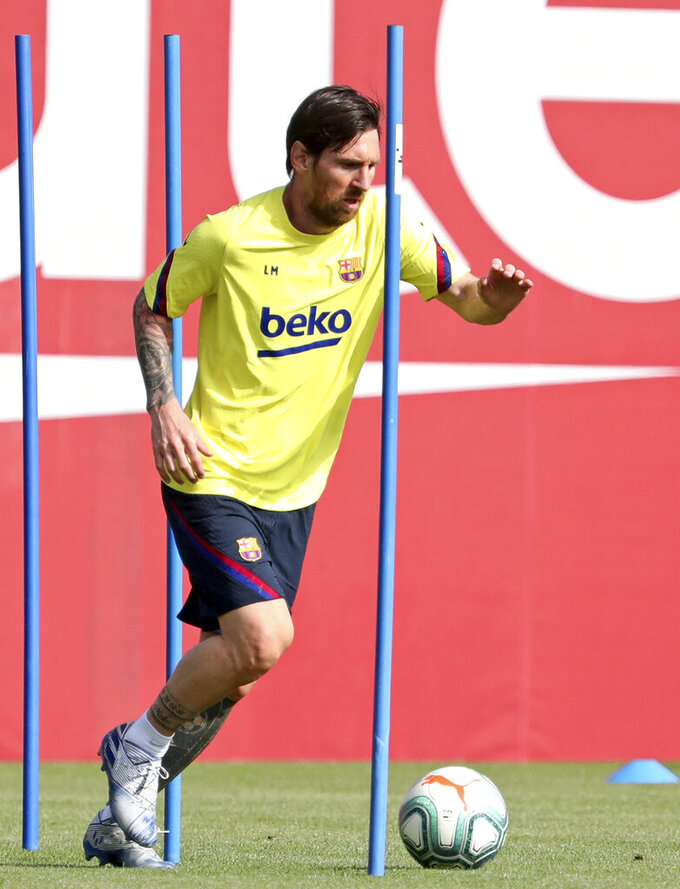 In this photo provided by FC Barcelona, Barcelona's Lionel Messi trains in Barcelona, Spain, on Friday May 8, 2020. Soccer players in Spain returned to train for the first time since the country entered a lockdown nearly two months ago because of the coronavirus pandemic. (Miguel Ruiz/FC Barcelona via AP)

MADRID (AP) — Many soccer clubs in Europe are still contemplating how to reimburse their season ticket holders amid the coronavirus pandemic.

With most European leagues likely finishing the season in empty stadiums, clubs have decisions to make regarding fans who paid for tickets but won’t be allowed to attend matches.

Though few clubs in Spain have announced options for their ticket holders, Madrid-based club Getafe is taking the forefront by giving fans a free season of league matches in 2020-21.

Getafe president Ángel Torres said the more than 13,000 fans who are up to date with their ticket payments won’t have to pay for La Liga games next season. though they will still have to purchase tickets for non-league matches.

The club said the move was a way to give back to fans for “the damages caused by the coronavirus health crisis.”

“With this measure Getafe wants to compensate the fans and thank them for their support in these difficult times,” the club said.

Getafe was in the round of 16 of the Europa League when the competition was suspended because of the pandemic. It was fifth in the Spanish league, just outside the qualification spots for the Champions League. It has five league home games left this season.

Belgian club Genk also extended its ticket memberships, making them valid until January of next year for free. The club said the measure could be further extended if fewer than six home matches with fans are played by then.

In England, Manchester United offered season ticket holders either a rebate for next year or a cash refund based on the number of games still to be played. Liverpool suspended its ticket renewal process but said prices would be frozen for a fifth consecutive year. Brighton offered a refund but said many fans agreed to donate the money back to the club or to a charity.

“It has been humbling to receive so many emails and messages from fans, firstly concerned for our welfare as a club and also as individuals and secondly asking for their ticket or membership payments to be retained by the club or Albion As One fund,” Brighton CEO Paul Barber said. “We fully appreciate not all fans will be in a position to make a donation or some may not wish to do that, but in response to those writing in we wanted to give all our supporters the choice.”

Spanish club Valladolid also said many of its fans were giving up their rights for a refund “as a way to help the institution.”

Like many other clubs in Spain, Real Madrid and Barcelona were yet to announce their plans for season ticket holders. Atlético Madrid said it would give a 20% discount for next season, while Real Sociedad refunded 20% of what fans paid this season regardless of how the league would end.

Eibar planned to give money back for the games played without fans, and was studying other actions that could include giving fans additional credit at the club’s stores.

Osasuna said it would not offer refunds this season but would keep prices unaltered for next season and would add two extra games that normally are not included in the regular season ticket package — usually against Real Madrid and Barcelona. If matches continue to be played without fans next season, the club said it would refund 3% for each match, up to a total of 57% of the total price for the season.