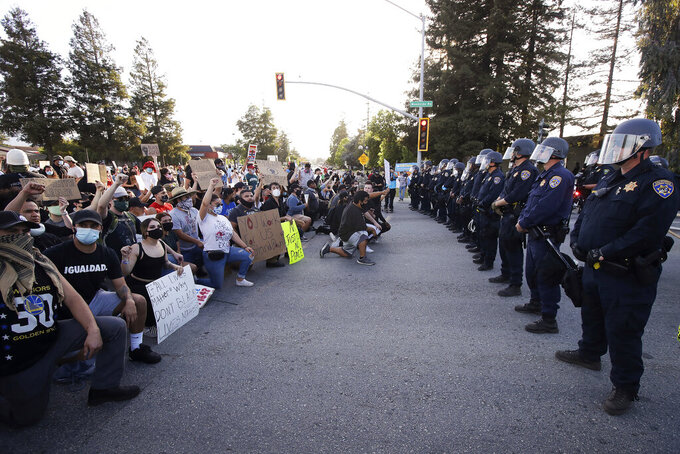 People kneel in front of a line of California Highway Patrol officers in Redwood City, Calif., Tuesday, June 2, 2020, at a protest over the Memorial Day death of George Floyd. (AP Photo/Jeff Chiu)

SAN FRANCISCO (AP) — Some California counties and cities have begun reducing or planning to end curfews as demonstrations over the death of George Floyd have largely remained peaceful. Other jurisdictions, however, expect to extend them out of caution.

In one significant exception to the peaceful trend, the San Francisco Bay Area city of Vallejo is reeling from a second straight night of violence. Fifty members of the National Guard arrived Tuesday in Vallejo after they were requested to “assist in securing locations that are considered high-risk,” said statement from the city.

A person was shot by police when people began breaking into stores late Monday, and another round of violence erupted late Tuesday.

“A group of approximately 100 individuals armed with batteries and nearly 40 vehicles surrounded the Vallejo Police Department,” the city said. “Additionally rocks and bottles thrown at PD units and a subject with a Molotov cocktail was observed.”

The shooting occurred when a group that had entered a Walgreens rammed a police officer outside, City Manager Greg Nyhoff said in a statement that did not say whether the suspect survived.

Elsewhere, Gov. Gavin Newsom made a low-key visit to Los Angeles. He helped pack lunches for a senior meal program and toured a neighborhood.

In the state capital, Sacramento Mayor Darrell Steinberg and Police Chief Daniel Hahn took a knee in honor of Floyd and marched with a few hundred demonstrators through scorching heat to a church.

Hundreds of people, meanwhile, lay down on scorching pavement in West Hollywood with their hands behind their backs, simulating the position Floyd was in when a Minneapolis police officer pressed a knee into his neck.

In Anaheim, the city blocked off streets to traffic around City Hall to make a safe area for demonstrators, police Sgt. Shane Carringer said.

Los Angeles County renewed its overnight curfew Wednesday, but it set a significantly shortened duration, 9 p.m. to 5 a.m. instead of 6 p.m. to 6 a.m. A county statement said it was assessing public safety needs daily. A few of the dozens of cities within the county maintained longer curfew hours.

San Francisco will lift its curfew Thursday morning, Mayor London Breed announced. She ordered the daily 8 p.m. to 5 a.m. curfew after widespread looting Saturday night, but some supervisors said they were were disturbed by restrictions on free speech.

“Following Saturday night, it was important for the safety of our residents to ensure that we could prevent the violence and vandalism that had taken place, but we know that the overwhelming majority of people out protesting are doing so peacefully and we trust that will continue,” she said on social media.

Steinberg, the Sacramento mayor, said an 8 p.m. to 5 a.m. curfew will extend through the weekend.

“I say that very reluctantly, but we want to make sure that everybody, including protesters, are safe,” he said at a march. “To get through the next few days and then to start fresh on Monday, we believe is the best thing.”

Steinberg said most local business owners are not upset about the curfew, though he acknowledged the “double whammy” many are facing following stay-at-home coronavirus orders that kept some businesses closed for months.

Authorities have credited curfews and the arrival of National Guard troops with significantly reducing vandalism and thefts. Officials have said organized gangs of thieves took advantage of the distraction of protests to hit dozens of businesses.

The Sacramento Police Department, meanwhile, is investigating an officer seen on cellphone video using a carotid restraint on an 18-year-old man arrested following a sidewalk chase early Monday, The Sacramento Bee reported. The technique, which can cut off blood flow to the brain and render a person unconscious, has been banned by many departments but is allowed in Sacramento under certain conditions. The suspect was arrested on suspicion of looting and resisting arrest.