Songwriters go online to craft the next hit song remotely 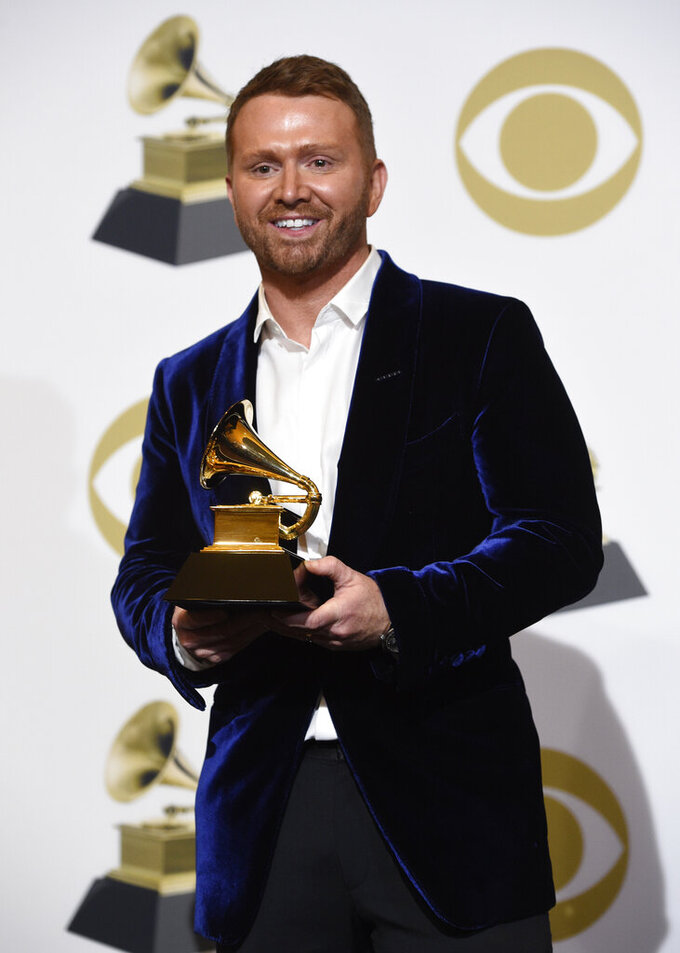 FILE - This Feb. 10, 2019 file photo shows Shane McAnally, winner of the award for best country song for "Space Cowboy" in the press room at the 61st annual Grammy Awards in Los Angeles. Songwriters are taking their writing sessions online during the pandemic, sometimes co-writing songs across continents. McAnally said he prefers feeling the energy in a room with another writer and finds the sound quality on video calls to be lacking.. (Photo by Chris Pizzello/Invision/AP, File)

NASHVILLE, Tenn (AP) — During a recent songwriting session, singer-songwriters Sarah Loethen and Christoffer Wadensten pieced together the lyrics and melody of a song they were writing about the global pandemic.

Loethen played the first verse and Wadensten, who performs under the artist name Meadows, came up with a melody for the chorus on his acoustic guitar.

But as Wadensten started to play, he realized that Loethen couldn’t see his fingers playing the chords. His guitar had fallen below the frame of his video screen, so he raised his guitar and tried again. “Yes, that’s tasty!” Loethen responded after playing the melody herself many thousands of miles away.

This songwriting session spans two continents. Loethen lives in Fayetteville, Arkansas, while Wadensten is in Örebro, Sweden. But like many songwriters and artists confined to their homes during the pandemic, they are still collaborating with each other as technology allows.

Remote songwriting during the pandemic gives a creative outlet for many writers and performers who can’t tour or record right now, but still need to exercise their craft. Writers and artists are relying on technology to co-write and record songs remotely while many recording studios were shuttered because of the spread of the new coronavirus around the world. But many say co-writing songs online requires a learning curve that can be technically challenging and also difficult to do long term.

“The only thing I really struggle with is the timing difference, not really being able to play together,” said Loethen, of the slight audio and video delay that comes with most video conference call software. “There’s sound cutting in from time to time and there might be some lag. It’s not too bad.”

Luckily the two actually met in person to co-write months before the pandemic through the songwriting residency program called House of Songs in Bentonville, Arkansas. And House of Songs has been helping to set up more remote co-writing sessions with artists living in different locations during the pandemic.

“I don’t generally do a lot of co-writes,” said Wadensten. “I feel very good doing this with Sarah because I know a bit more how that works and how our chemistry is.”

In Nashville, hit songwriters spend hours every day writing with each other, sometimes at a house, or a publisher’s office, or a recording studio. So when state and local officials started issuing stay at home orders, the writers moved online with Zoom or Skype to keep their musical ideas flowing.

“I actually love it, to be honest,” said Ross Copperman, a producer and writer in Nashville who has co-written 17 No. 1 country hits, including his latest “Nobody But You,” performed by Blake Shelton and Gwen Stefani.

“I have found that it works really good if somebody has a studio that can make tracks,” said Copperman from his home in Nashville. As a producer, too, he’s been using various iPhone apps and other technology that can be used at home to finish songs for upcoming albums.

“Michael Hardy used like a headset speaker microphone plugged into his iPhone and the vocal sounded incredible,” said Copperman.

He said he’s been trying to stay busy despite the slowdown in the music industry and has been working remotely with artists like Dustin Lynch and Michael Ray. But he admits that the attention that video calls require can be draining.

“My attention is good for like an hour and half on Zoom and then I just start kinda getting a headache,” said Copperman.

Grammy-winning songwriter and producer Shane McAnally, who has co-written hits like “Body Like a Back Road,” by Sam Hunt and “Space Cowboy” by Kacey Musgraves, is less of a fan of video call songwriting.

“I have a hard time with it because I am the kind of person who needs to feel the other person in the room and tap into their energy,” said McAnally, who said he’s been writing online with Brandy Clark lately.

McAnally also said the sound quality on video calls is lacking, and he finds himself getting distracted easily when staring at a screen.

“It’s hard for me to stay focused,” said McAnally. “It feels very one dimensional.”

But country star Brad Paisley said he’s been experimenting with online co-writing for a while. He even co-wrote his 2007 song “Online” over Skype. He said he feel more dialed in when he’s online with a co-writer.

“You’re focused,” said Paisley from his home in Franklin, Tennessee, where he recently wrote online with Country Music Hall of Famer “Whisperin’” Bill Anderson. “In writers sessions, there’s so much that happens. There’s like small talk about family. You get distracted by a text.”

Paisley also said that having his own recording studio at home has helped him stay productive at home during the stay at home orders. He re-recorded parts of his latest single, “No I In Beer,” at his home.

“I am trying to be creative,” Paisley said. “I’ve got nothing on my schedule until 2021 at this point. I hope that’s not true. I hope there’s some tour dates that we still play this year.”