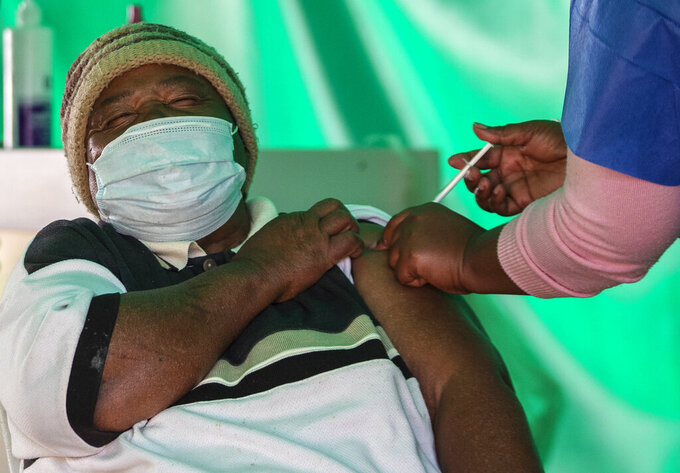 A retiree receives the first dose of the Pfizer coronavirus vaccine from a health worker inside a tent, during a mass vaccination program for the elderly at the clinic outside Johannesburg, South Africa, Monday, May 24, 2021. South Africa is in a race against time to vaccinate as many people as possible with signs the virus may be surging again. (AP Photo/Themba Hadebe)

ORANGE FARM, South Africa (AP) — Spry and gray-haired, many dressed in their Sunday best or colorful African prints — and all sporting masks — dozens of South Africans aged 60 and over gathered at a government health clinic outside Johannesburg to get their COVID-19 shots.

Some looked at vaccine notifications on their mobile phones, others clutched pieces of paper, as the line moved along at a good pace. Eight at a time, they were ushered into a tent where they took seats distanced from each other.

“You are about to receive a vaccine to protect against COVID-19. It is the Pfizer vaccine and it requires two doses,” said a nurse, speaking the Zulu language to the group at the Orange Farm township clinic, about 30 miles (45 kilometers) south of Johannesburg. She described what they should do about possible side effects.

“Amen,” she said in closing, and the vaccine recipients murmured the same response, as if in church.

South Africa is in a race against time to vaccinate as many people as possible amid signs the virus may be surging again with the approach of winter in the Southern Hemisphere, when people spend more time indoors, typically allowing for more spread of disease. It is also a critical front in the fight against the virus in Africa, with South Africa recording 40% of the continent's COVID-19 deaths.

Since January, South Africa has vaccinated nearly 500,000 of its 1.2 million health care workers and now is adding its older citizens to the campaign. In the past two weeks nearly 200,000 have received the Pfizer jabs with instructions to come back in six weeks to get their second dose.

“I am getting the vaccine because I want to be alive,” 76-year-old Elizabeth Mokwena said. “I know it's the best thing for me to do against this COVID.”

The increase may seem small, but experts warn it may be the start of a resurgence as the country enters the colder winter months, which start in June.

The national coronavirus task force met this week and President Cyril Ramaphosa’s government is pondering the possibility of re-imposing restrictions, such as reducing the hours that liquor can be sold and limiting the number of people at gatherings.

South Africa has by far the heaviest burden of the disease in Africa. With more than 1.6 million confirmed cases, including 55,976 deaths, the country has more than 30% of the cases and 40% of the deaths recorded by all of Africa's 54 countries, according to the Africa Centers for Disease Control and Prevention. The continent of 1.3 billion people has reported 4.7 million cases, including 129,000 deaths, according to the Africa CDC.

South Africa has set a goal of vaccinating 5 million seniors by the end of June, so the new campaign's slow start must quickly ramp up speed.

“We're under pressure to reach higher levels of vaccination,” Mosa Moshabela, professor of public health at the University of KwaZulu-Natal, told The Associated Press.

“New vaccination centers are opening every day and the numbers being given shots should quickly go from 20,000 elderly per day to 50,000 and then 100,000 per day," he said. “By June we should reach 200,000 per day. We need to have that kind of volume to get close to vaccinating 5 million elderly by the end of June.”

South Africa's overall goal is to vaccinate 67% of its 60 million people by February. To achieve that it has purchased 30 million Pfizer doses, of which 1.3 million have been delivered so far and 4.5 million are expected by the end of June.

The country has also ordered 31 million doses of the Johnson & Johnson vaccine, which have not yet arrived. An initial delivery of 500,000 doses was used to vaccinate health care workers.

Both the J&J and Pfizer vaccines are effective against the COVID-19 variant dominant in South Africa, according to studies. Earlier this year South Africa received 1 million doses of the AstraZeneca vaccine from the United Nations-backed COVAX initiative but scrapped their use because a preliminary, small study showed it did not give effective protection against the variant.

“It was a good move for South Africa to purchase the Pfizer and J&J vaccines on its own,” said Moshabela, who is also acting deputy vice chancellor for research and innovation at the University of KwaZulu-Natal. “Many other African countries are now stuck because COVAX deliveries of the (AstraZeneca) vaccines from India have been delayed.”

“We are off to a slow start, but it will speed up and we will have an adequate supply of vaccines. It’s a good thing we purchased those directly,” he said.

The rest of Africa's reliance on COVAX for supplies of AstraZeneca vaccine has led to problems now that India, beset by a deadly surge, has halted exports of the shots until it vaccinates an adequate amount of its 1.4 billion people.

The World Health Organization announced Thursday that Africa needs at least 20 million AstraZeneca doses in the next six weeks to give second shots to all those who have received a first dose.

In addition, another 200 million doses of approved vaccines are needed to enable the continent to vaccinate 10% of its population by September, WHO said.

“It’s too soon to tell if Africa is on the cusp of a third wave. However, we know that cases are rising, and the clock is ticking so we urgently appeal to countries that have vaccinated their high-risk groups to speed up the dose-sharing to fully protect the most vulnerable people.”

At the Orange Farm clinic in South Africa, where nearly 200 people were vaccinated daily this week, Freedman Zikhali said he was pleased to have gotten his first dose.

“Getting this vaccine was the right thing to do," the 76-year-old said in the Zulu language.

“I’d ask myself while watching TV, ‘Why haven’t I received the vaccine while other people around the world are being vaccinated?' So I think what I have done here is the right thing to do.”