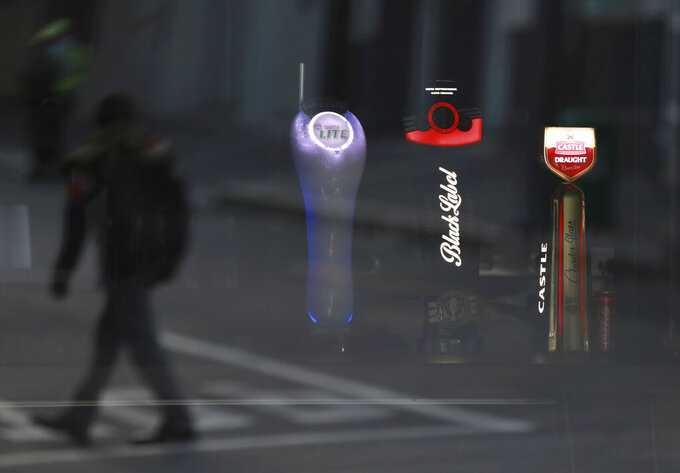 FILE - In this May 7, 2020, file photo, beer taps of South African Brewery brands are seen through the window of a closed bar in Cape Town, South Africa. A bootlegging culture has sprung up across South Africa in response to the government's nearly 8-week-old ban on the sale of cigarettes and alcohol. (AP Photo/Nardus Engelbrecht, File)

JOHANNESBURG (AP) — A soccer mom in one of Cape Town's posh suburbs drops off a cardboard box of blankets to a neighbor. Inside the box are several bottles of red wine.

In Johannesburg's Alexandra township, two men in face masks greet each other on a sunny street. One has surreptitiously sold the other a pack of cigarettes.

A bootlegging culture has sprung up across South Africa in response to the government's nearly 8-week-old ban on the sale of tobacco and alcohol, part of its strict lockdown to combat the spread of the coronavirus.

“They've banned the sale of cigarettes but we're still able to buy them," said street vendor Mluleki Mbhele. "We buy cigarettes in the streets in the black market. The officials know about it because they themselves continue to smoke.”

Critics describe the prohibitions imposed by President Cyril Ramaphosa as puritanical, hypocritical and unrealistic. Around the world, only Panama and Sri Lanka are reported to be prohibiting the sale of liquor during the pandemic, while India and Thailand temporarily banned it.

South African government officials say the number of admissions to hospital emergency rooms from alcohol-related crimes and vehicle accidents have been reduced significantly. Supporters of the ban on cigarette sales say smoking weakens the respiratory system, which is attacked by the virus.

South Africa has the continent's highest number of confirmed coronavirus cases with over 24,000. The virus has spread relatively slowly across Africa, whose 54 countries with a population of 1.3 billion have reported a total of over 115,000 cases.

More than 230,000 South Africans have been arrested for breaking the lockdown regulations, including the bans on alcohol and tobacco sales, said national police minister Bheki Cele.

“We have also observed an increase in smuggling of contraband (liquor and tobacco) between South Africa’s land borders with Botswana, Eswatini, Lesotho, Mozambique and Zimbabwe, as well as the sale of these products in the black market,” Cele said on May 22, adding that officials seized alcohol and cigarettes worth Rand 2.67 million (about $148,000) in March and April.

At first, South African vineyards were prohibited from transporting or exporting their wine, causing a loss in international sales. That restriction was lifted May 1 but the winemakers are still being hurt on lost domestic sales.

The sale of cigarettes will remain banned. An illegal trade in cigarettes is thriving, even though the price of a contraband pack can be the equivalent of $6, nearly three times what it cost before the ban. South Africa has long had a problem of criminal gangs illegally selling cigarettes, estimated to be in the millions of dollars.

In Cape Town, the Woodstock Brewery has adapted to the ban by using its large vats to cook meals for the city's poor.

The Disoufeng Pub, once a popular Soweto watering hole, has not sold any liquor for nearly eight weeks.

“It’s really sad to be feeling the pain," said owner Tobogo Phiri, who reopened its kitchen two weeks ago to sell takeaway food.

Some of his high-roller customers have tried to get him to break the regulations by selling them liquor, promising to spend the equivalent of more than $500.

“You couldn’t even entertain it," said Phiri, adding he would not break the law. "So it’s been very, very, very hard. But one had to be disciplined and just decline every sale. So we are feeling the pain.”

Other South Africans say they favor the restrictions.

“Without alcohol, serious crime has gone down," said Mphumelelo Mdunge, a Soweto resident. "And in the hospitals, there are less people injured from drunken driving and from people beating their wives and arguments. All those disagreements have gone down because there’s less alcohol. So I see it as a good thing.”