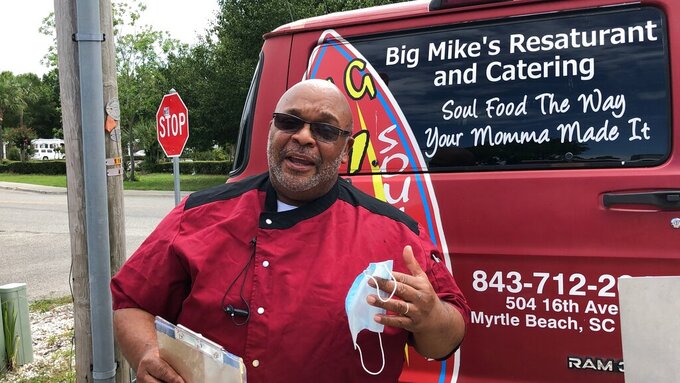 Myrtle Beach City Councilman Michael Chestnut talks outside his restaurant, Thursday, June 18, 2020, in Myrtle Beach, S.C. Chestnut said businesses were in a terrible position. A number remain closed. Others that reopened are struggling with the extra cost of cleaning, food and other supplies and reduction in revenue because they can't pack as many people under social distancing rules. “Man, at this point I'm just praying we get back to normal. I want to keep people healthy, but businesses are hurting too," Chestnut said. (AP Photo/Jeffrey Collins)

MYRTLE BEACH, S.C. (AP) — The elevator doors opened and inside were 10 people crammed into a space no bigger than a closet, none of them wearing a mask.

In bathing suits, they walked out of the hotel, across the pool deck and into the sand in what is fast becoming South Carolina's hot spot for COVID-19 — Myrtle Beach. People in this resort city are leaving their cares — and sometimes their face coverings — at home after months of worry as hotels, restaurants and beaches reopen.

Mark Johnson said he doesn't like wearing a mask when he's at work delivering doughnuts to grocery stores around Charlotte, North Carolina. “Just wash your hands and use common sense,” Johnson said as he sat on a chair in the sand, a can of beer in his cup holder.

The coronavirus has not taken a vacation. When hotels were allowed to start taking reservations again on May 15, there had been 283 COVID-19 cases in Horry County, which includes Myrtle Beach. By June 22, that number had climbed to more than 2,000, and infections had doubled in nine days.

And those numbers include only people who live in the county. The figures do not count anyone who tests positive after taking COVID-19 home along with a souvenir hermit crab or an airbrushed T-shirt. Business leaders estimate 20 million people visit the area each year, 60 times Horry County's population of about 330,000.

It was unclear how many visitors could be expected in 2020. In April, just 3% of hotel rooms, condominiums and campsites in Horry County were rented, according to research from Coastal Carolina University. By mid-June, occupancy rates rebounded to 74%, only slightly less than the typical 81% at this point in the summer, the college reported.

Health officials in at least five West Virginia counties determined through contact tracing that trips to Myrtle Beach likely led to infections. They recommend finding safer destinations or self-quarantining for two weeks after a trip.

“Please be careful. And please think real hard about getting tested when you get home," West Virginia Gov. Jim Justice told people who visited Myrtle Beach. "If you would opt to go to one of our state parks or do something in this great place in West Virginia, we’d rather you do that.”

Christy Kasler is from another state that produces many Myrtle Beach visitors — Ohio. As she sat in a chair and watched her daughter-in-law play with her 11-month-old grandson on his first trip to the beach, she said the recommendation to self-quarantine when she returns to her Nelsonville home was asking too much.

“If I get it, I could have just as easily got it back home,” Kasler said. “You can't live your life in fear.”

When Gov. Henry McMaster effectively closed the state at the start of April, the rate of new cases flattened out. It started climbing again after reopening began in early May, and the rate keeps rising. South Carolina now has the fourth-highest new infection rate in the nation when adjusted for population, trailing just Arizona, Arkansas and Alabama.

The state sets records almost daily for the number of new cases, the percentage of positive tests and the number of people in the hospital with COVID-19.

Since reopening six weeks ago, the message from both local and state governments in South Carolina shifted from shutdowns to personal responsibility, like washing hands and wearing masks, although McMaster has said he will not require face coverings.

After giving televised COVID-19 briefings nearly every day when the virus first started to spread, McMaster and state health officials have not spoken in front of cameras for more than a week. When they do talk, they say shutting businesses again is out of the question.

“We understand that what we’re continuing to ask of everyone is not easy and that many are tired of hearing the same warnings and of taking the same daily precautions, but this virus does not take a day off,” state epidemiologist Dr. Linda Bell said in a statement.

Myrtle Beach needs visitors. Instead of a shutdown, the community now fears that bad publicity could keep people away. That would be terrible news after restaurants and many hotels were closed for two months.

From February to April, more than 1 in 4 workers lost their jobs, and nearly 45,000 jobs disappeared in the Myrtle Beach area, vaulting Horry County to the top of South Carolina jobless rate, according to unemployment figures.

Some of those businesses remain closed. Others that reopened are struggling with the extra cost of cleaning, food and other supplies, and the reduction in revenue because they cannot accommodate as many customers under social-distancing rules.

“Man, at this point I'm just praying we get back to normal. I want to keep people healthy, but businesses are hurting too," Myrtle Beach City Councilman Michael Chestnut said outside his restaurant, Big Mike's Soul Food.

He paused and shook his head. “I'm not sure what normal is ever going to look like,” Chestnut said.

The Myrtle Beach City Council initially imposed a limit of three people per elevator when adopting rules to reopen hotels. But in a place where the oceanfront skyline is dominated by tall hotels, it was impractical to make people climb all those stairs or wait for an empty elevator, Chestnut said.

Jacko Morowitz has run a gift shop somewhere in Myrtle Beach for more than 25 years. He thought about putting a sign on the door requiring masks and asking customers to cover their mouth and nose when inside.

But he bought $100,000 of merchandise last winter for his Good Vibes Gift Shop, and the inventory just sat there for two months. He figures he can't risk turning a single customer away by pushing masks.

Asked what might happen if suddenly people get scared of the virus and stop coming to Myrtle Beach, Morowitz blurted out “we're” followed by an expletive.

“Sorry about that,” he said. “But that's the best word I can use whether I get sick or everybody stays home.”