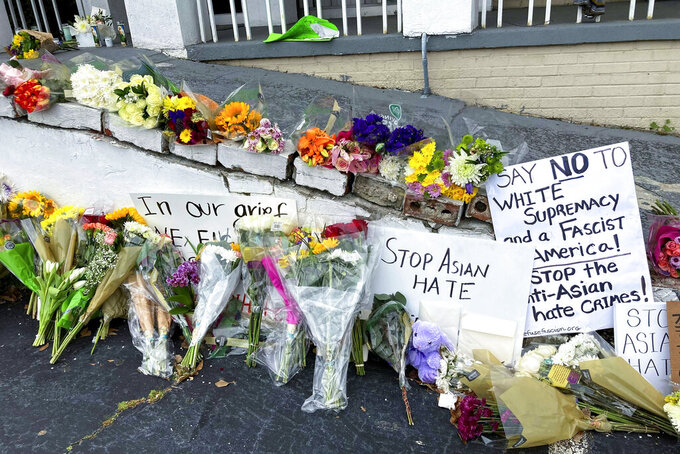 FILE - In this March 19, 2021, file photo, flowers, candles and signs are displayed at a makeshift memorial in Atlanta. A deadly rampage at three Georgia massage businesses, where the employees were mostly of Asian descent, has prompted Asian American women to openly share stories of being sexually harassed or demeaned based on their race. (AP Photo/Candice Choi, File)

ATLANTA (AP) — The murder case against a white man charged with shooting and killing six women of Asian descent and two other people at Atlanta-area massage businesses this week could become the first big test for Georgia’s new hate crimes law.

Robert Aaron Long, 21, told police that the attacks Tuesday at two spas in Atlanta and another massage business near suburban Woodstock were not racially motivated and claimed to have a sex addiction. Authorities said he apparently lashed out at what he saw as sources of temptation but were still investigating his motive.

Because most of the victims were women of Asian descent, there's skepticism of that explanation and public clamoring for hate crime charges, especially among the Asian American community, which has faced rising numbers of attacks since the coronavirus pandemic took hold.

But, like many states, the Georgia law enacted last summer does not provide for a standalone hate crime, instead allowing an additional penalty when a person is convicted of another crime.

“It's not something you get arrested for. It's a sentence enhancer,” said Pete Skandalakis, a former prosecutor and executive director of the Prosecuting Attorneys' Council of Georgia.

The law says an additional penalty can be applied for certain crimes if they are motivated by a victim's race, color, religion, national origin, sex, sexual orientation, gender, or mental or physical disability. Even before the law passed amid the national reckoning over racial injustice, the pandemic had largely paused court cases, so Skandalakis said he doesn’t believe the rule has been used yet.

A hate crime charge can be included in an indictment or added at some point before trial. If a jury convicts the defendant of the underlying crime, prosecutors can present evidence for a hate crime sentencing enhancement. Defense attorneys can present their own evidence, and the jury deliberates again. If jurors find it's a hate crime, there is a mandatory enhancement of at least two years in prison and a fine of up to $5,000 for a felony.

The federal government and some other states go further with laws that criminalize bias-motivated violence without requiring a conviction on an underlying crime.

The U.S. Department of Justice could choose to bring federal hate crime charges independently of the state prosecutions. Federal investigators have not yet uncovered evidence to prove Long targeted the victims because of their race, two law enforcement officials told The Associated Press. The officials had direct knowledge of the investigation but were not authorized to speak publicly and spoke on condition of anonymity.

In Georgia, the minimum sentence for murder is life in prison, with or without the possibility of parole after 30 years. Prosecutors also can seek the death penalty if the killing meets certain requirements.

Wallace said in a statement that she can't answer specific questions about the case but that she is “acutely aware of the feelings of terror being experienced in the Asian-American community.” A representative for Willis did not respond to requests for comment.

Given that someone convicted of multiple murders is unlikely to be released from prison, an argument could be made that it's not worth the effort, time and expense to pursue a hate crime designation that carries a relatively small additional penalty.

But Republican state Rep. Chuck Efstration, who sponsored the legislation, said it's not just about the punishment.

And the law needs to be used to give it teeth, said state Sen. Michelle Au, a Democrat who is Chinese American.

Au believes there has been some resistance nationwide to charge attacks against Asian Americans as hate crimes because they are seen as “model minorities,” a stereotype that they are hard-working, educated and free of societal problems. She said she heard from many constituents in the last year that Asian Americans — and people of Chinese descent in particular — were suffering from bias because the coronavirus had emerged in China and then-President Donald Trump used racial terms to describe it.

“People feel like they’re getting gaslighted because they see it happen every day,” she said. “They feel very clearly that it is racially motivated, but it’s not pegged or labeled that way. And people feel frustrated by that lack of visibility and that aspect being ignored.”

In addition to sending a message to the community, it's important for the new law to be used for legal reasons, Georgia State University law professor Tanya Washington said. While police have said it's too soon to tell whether the spa shootings qualify as a hate crime, she said it seems obvious the violence was motivated by bias given the people and businesses targeted.

“Unless we test it with cases like this one, we won't have a body of law around how do you prove bias motivated the behavior,” she said.

While many of the calls for a hate crime charge have focused on race, J. Tom Morgan, a former district attorney in Georgia, said it appears the victims' gender motivated the shootings.

“This, to me, is a sex crime hate crime where the victims happen to be Asian," he said.

Georgia was one of only four states without a hate crimes law when lawmakers quickly passed it last year following the killing of Ahmaud Arbery, a Black man pursued by armed white men last year, and national protests against racial injustice and police brutality.

Georgia’s Supreme Court had overturned an earlier hate crimes statute in 2004, saying it was too broad.