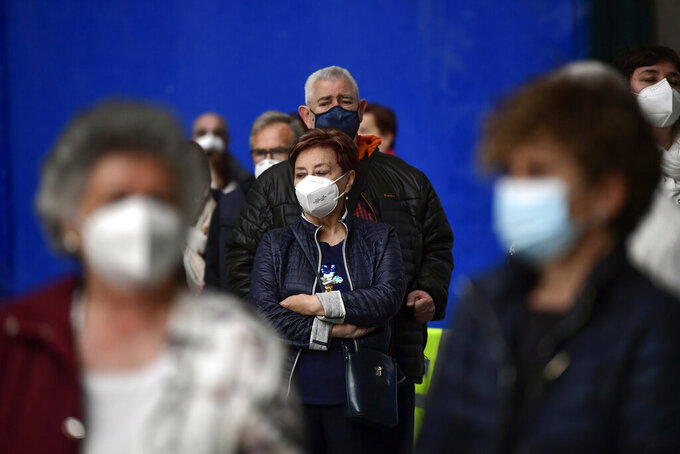 People wearing face mask protection to prevent the spread of the coronavirus while waiting to receive a shot of Pfizer vaccine during a COVID-19 vaccination campaign, in Pamplona, northern Spain, Friday, May 7, 2021.(AP Photo/Alvaro Barrientos)

MADRID (AP) — Spain will relax nationwide pandemic measures this weekend, including travel restrictions, but some regional chiefs are complaining that the six-month-long national state of emergency will be replaced by a patchwork of conflicting approaches.

Now that the country's contagion rate has stabilized while vaccine rollout continues to speed up, Prime Minister Pedro Sánchez has refused to extend the sweeping order that gave legal coverage to curfews, social gathering curbs and travel bans across the country. The order expires at midnight on Saturday.

His Cabinet is instead handing over full control of the battle against infection spread to the country’s 19 regions and autonomous cities, telling them they can go to the country’s Supreme Court if lower-level judges rule against their attempts to curtail basic freedoms.

But by Friday, just over 24 hours before the end of the state of emergency, each region was taking a different path — and the response from courts was also varied.

Judges approved for the Balearic Islands, a tourist magnet in the Mediterranean Sea, and for the eastern Valencia region to keep a night-time curfew and bans on the number of people allowed to socialize. But a court in the northern Basque region refused to extend localized lockdowns, a 10 to 6 a.m. curfew and a 4-person cap on social gatherings.

Madrid, whose lockdown-skeptic regional chief was re-elected earlier this week, announced that there will be no more curfews or travel restrictions in and out of the region starting Sunday, and that the operation of bars and restaurants can be extended from the current 11 p.m. limit to midnight.

“There is no (legal) coverage to adopt restrictive measures such as the curfew," said Madrid's health chief, Enrique Ruiz Escudero, whose region has the second-highest infection rate with 323 new cases per 100,000 for the past two weeks.

“We trust in the citizens' responsible behavior," Ruiz Escudero said on Friday.

Sánchez’s left-wing coalition has been under fire from opposition parties and regional chiefs for not anticipating the legal mess by launching a legal reform to give regions more powers. The government says that the existing public health law from 1986 allows them enough room to maneuver.

Spain's rollercoaster of a contagion curve surged sharply in January, coinciding with end-of-year celebrations, but bottomed down in mid-March before mildly picking up again.

The country's top coronavirus expert, Fernando Simón, says that the joint effect of past infections, existing measures against outbreaks and the increasing pace of vaccination has turned what could had been a fourth wave into a mere “ripple."