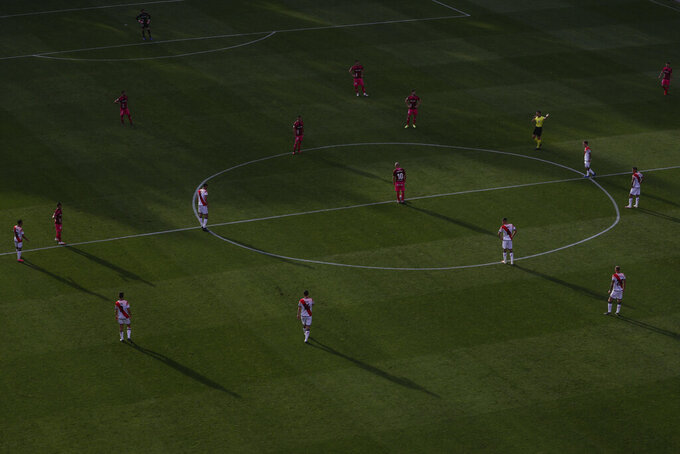 Rayo Vallecano and Albacete soccer players play a second-division game in Madrid, Spain, Wednesday, June 10, 2020. With virtual crowds, daily matches and lots of testing for the coronavirus, soccer is coming back to Spain. The Spanish league resumes this week more than three months after it was suspended because of the pandemic, becoming the second top league to restart in Europe. The Bundesliga was first. The Premier League and the Italian league should be next in the coming weeks. (AP Photo/Manu Fernandez)

MADRID (AP) — With tributes to pandemic victims and with fans watching from nearby balconies, Spanish soccer resumed Wednesday with the second half of a second-division match that was halted last year after fans called a player a Nazi.

Rayo Vallecano defeated Albacete 1-0 in what was the first match played in Spain since the coronavirus pandemic struck in mid-March.

The second-tier match had already been scheduled to be played without fans as punishment for Rayo after its fans insulted Albacete’s Ukrainian forward Roman Zozulia during its home match on Dec. 15.

Last year’s match was scoreless at halftime when it was halted after Rayo fans used abusive language against Zozulia in chants and in a banner. Both teams asked the referee to stop the match.

Spain’s first division will resume in empty stadiums on Thursday with the Seville derby between Sevilla and Real Betis. Leader Barcelona will visit Mallorca on Saturday, while Real Madrid — trailing the rival by two points — hosts Eibar on Sunday.

The German Bundesliga was the first to restart in May, and the Premier League and the Italian league are set to follow next week.

Some fans got to watch Wednesday’s game from the balconies of nearby buildings overlooking the Vallecas Stadium in southern Madrid. A man with a small child — both wearing Rayo jerseys — were shown celebrating from their balcony after Peruvian defender Luis Advíncula scored the winner with a left-foot shot that curled into the top corner in the 61st minute.

Players mostly maintained their distance during the goal celebration on the field, with a few touching Advíncula to congratulate him.

The Spanish league hasn't communicated strict restrictions on goal celebrations and has so far appealed to players to use common sense and their judgement.

A large banner in the stands spanned from one goal line to the other with the image of a black ribbon and the message “we will never forget you" to honor the nearly 28,000 victims of the coronavirus in Spain. Behind one of the goals, another banner read “you will always be on our memories.”

Flowers were placed at different locations at the Vallecas Stadium.

Players from both teams walked onto the field separately and lined up at midfield a few meters apart from each other. A minute of silence was held before the match as players lined up around the midfield circle.

Rayo coach Paco Jémez wore a mask and gloves on the bench during the game, while Albacete manager Lucas Alcaraz did not. Rayo's substitutes, wearing gloves and masks, sat in a seating section behind one of the benches.

The game was stopped in the 75th minute to give players a chance to rehydrate. Albacete started playing with 10 men after one of its players was sent off in the first half in December.

Zozulia, who played on Wednesday, had made headlines in Spain early in 2017 when his loan from Real Betis to Rayo Vallecano was called off because of protests by Rayo fans who accused the player of having connections to extremist groups in his home country. Zozulia has always strongly denied such connections.