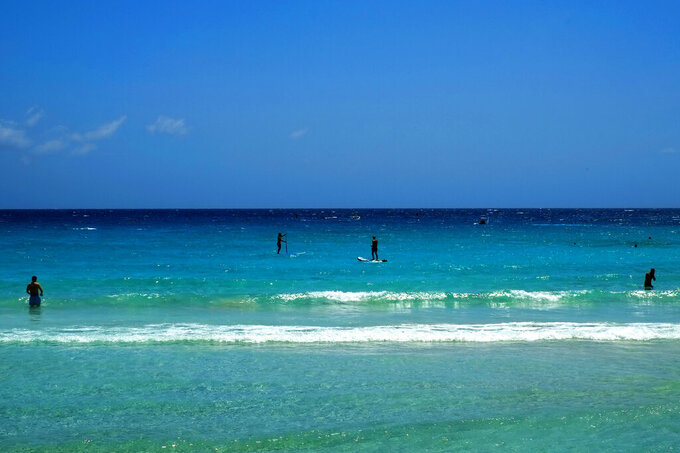 Two men surf in southeast resort of Ayia Napa, in the eastern Mediterranean island of Cyprus, Saturday, May 22, 2021. Tourism accounts directly for 13 percent of Cyprus' gross domestic product and authorities are striving to attract mass arrivals by touting the country's decision for quarantine requirements to holiday makers from 65 countries. (AP Photo/Petros Karadjias)

NICOSIA, Cyprus (AP) — Tourism in Cyprus got a shot in the arm Tuesday after Europe’s environmental watchdog ranked the country first among the European Union's 27 nations for having the cleanest swimming waters.

According to the European Environment Agency’s rankings for the 2020 swim season, Cyprus received a perfect score of 100% for excellent water quality at 112 swimming spots around the island, which were tested between May 1 and Oct. 31 last year.

Cyprus beat out Austria, Greece and Malta, which came in second, third and fourth.

That’s a timely boost for the east Mediterranean island nation, which is trying to woo holidaymakers back after a dismal 2020 summer season that saw tourist arrivals plunge more than 84% from the previous, record-setting year.

“There’s a direct correlation between bathing water quality and tourism and as a result, the excellent results are very important not only for the health of bathers and the environment, but also for the economy of Cyprus,” Environment Minister Costas Kadis said.

The key for a healthy economy in Cyprus is to bring back tourists from the U.K. — its prime tourist market.

Deputy Minister for Tourism Savvas Perdios is touring the U.K. now to drum up interest among tour operators once British authorities place Cyprus in the government's “green” list. That means visiting Britons won’t need to undergo a compulsory quarantine period upon their return home.

Health Minister Constantinos Ioannou told state broadcaster CyBC on Tuesday that Cyprus and Denmark currently have the lowest COVID-19 infection rates in Europe, while Cyprus ranks third in the percentage of the population that has received at least one vaccine shot.

Follow all AP stories on environmental and climate news at https://apnews.com/hub/climate.