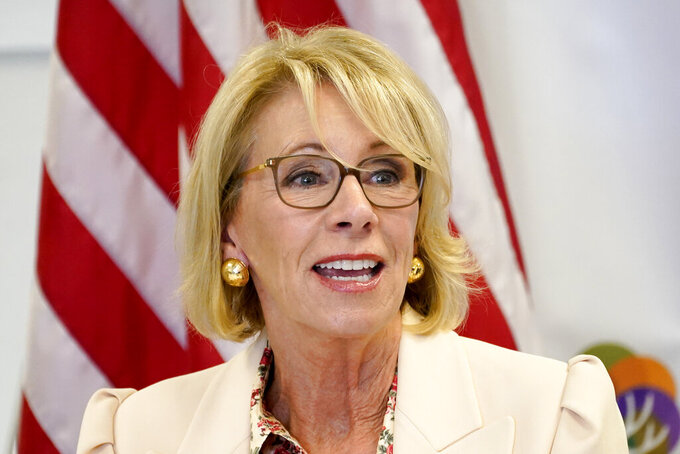 FILE - In this Oct. 15, 2020, file photo Secretary of Education Betsy DeVos speaks at the Phoenix International Academy in Phoenix. DeVos has extended the moratorium on student loan payments and the accrual of interest until Jan. 31, 2021. (AP Photo/Matt York, File)

The year-end spending bill before Congress would restore prisoners' eligibility for federal Pell grants for college, simplify the form used to apply for student aid and erase more than $1 billion in federal debt for historically Black colleges, among an array of other education initiatives tucked into the legislation.

An accompanying pandemic relief bill, however, has drawn criticism from higher education advocates who say it does too little for the nation's beleaguered colleges and students.

The massive, catchall bill combines $900 billion in COVID-19 aid with a $1.4 trillion spending bill. Congress struck a deal on the bill Sunday.

Under the deal, prisoners would again be allowed to obtain federal Pell grants for low-income students. A 1994 bill blocked prisoners from the program, but momentum has been growing to reverse the decision.

The Obama administration chipped away at the prohibition with a 2015 pilot program allowing prisoners to use Pell grants at a limited number of colleges. The Trump administration expanded the program, and Education Secretary Betsy DeVos called on Congress to make the pilot permanent.

An outright reversal of the prohibition had been proposed by Sen. Patty Murray, D-Wash., who said the 1994 law made it harder for prisoners to get jobs and support themselves when released.

“Every single person in this country should be able to access and afford a quality higher education — and today we move substantially closer to that goal," said Murray, who is the top Democrat on the Senate's education committee.

The move was praised by the nonprofit Vera Institute of Justice, which has pushed to have the prohibition lifted.

“Allowing people in prison to access higher education is a critical step toward a more equitable society, especially for Black and brown people who have historically been sentenced to prison at higher rates and trapped in cycles of incarceration,” said Nicholas Turner, the group's president and director.

For Republicans, the bill secures a longtime goal to simplify the Free Application for Federal Student Aid, the form that students fill out to determine their eligibility for federal financial aid.

Sen. Lamar Alexander, R- Tenn., has spent years pushing to simplify the form. He got his provision included in the legislation on the cusp of his retirement from Congress at the end of the year.

“After nearly seven years of work Congress and the president will simplify federal student aid for 20 million families who fill out these unnecessarily complicated forms every year,” said Alexander, chairman of the Senate education committee.

The bill would also forgive debt taken on by historically Black colleges and universities through a federal loan program for capital projects, and it repeals a 1998 rule barring those with drug offenses from obtaining federal student aid.

Higher education advocates applauded some of the changes but said an accompanying $900 billion virus relief bill failed to deliver the help Americans need. It would provide $23 billion to colleges and universities, the first federal virus aid since a virus package Congress approved in March.

The American Council on Education, an association of college presidents, said colleges will need at least $120 billion to begin to address losses suffered by the pandemic.

“The money provided in this bill will provide some limited relief, which is welcome news to struggling students and institutions,” said Ted Mitchell, the group's president. “But it is not going to be nearly enough in the long run or even the medium term.”

Other groups criticized Congress for failing to extend a measure that has suspended federal loan payments and interest during the pandemic. DeVos this month extended the moratorium through January and called on Congress to act on a longer-term solution, but the new bill does not address the issue.

“The result will be weeks of unnecessary chaos and uncertainty as borrowers wait to see if the Biden administration will extend the pause upon taking office," said Jessica Thompson, assistant vice president for the Institute for College Access and Success.

For K-12 schools, the bill provides $54.3 billion, with an additional $4.1 billion that governors can use on education.