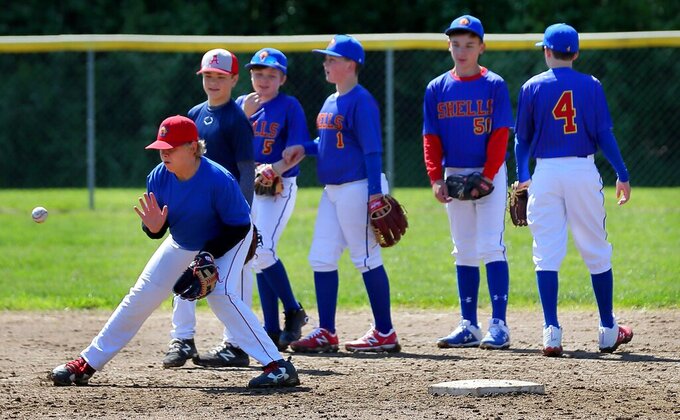 In this Saturday, May 9, 2020 photo, Members of the Roxanna Shells youth baseball team taking fielding practice before their first game of the Mother's Day Classic baseball tournament organized by GameTime Tournaments in Cottleville, Mo. Forty-seven teams from Missouri and Illinois competed in the tournament. (David Carson/St. Louis Post-Dispatch via AP)

O'FALLON, Mo. (AP) — Large events are slowly starting up again in Missouri — a state more willing than most to permit sports, concerts and shows following the economic shutdown aimed at stemming the spread of the coronavirus — even as some experts wonder if it’s too soon.

A youth baseball tournament near St. Louis last weekend generated national attention. Musical shows that help draw tourists to Branson are resuming. Concerts are allowed, though they remain on hold.

Missouri Gov. Mike Parson’s “Show Me Strong” plan allowed nonessential businesses to reopen May 4. The plan does require people to keep their distance from each other, but it includes no prohibition on large-scale sports and entertainment. Epidemiologists are concerned because studies suggest people can be infected with the virus — and spread it to others — without feeling sick.

Last weekend, about 50 teams with an estimated 550 players participated in a youth baseball tournament in St. Charles County, a St. Louis suburb that has seen 679 confirmed cases of the virus that causes COVID-19. While organizers offered a long list of rules that included limits on kids in the dugout and no high-fives, the St. Louis Post-Dispatch reported instances where groups of boys congregated together or coaches and players leaned together to talk.

The tournament was allowed under both Parson’s plan and St. Charles County’s guidelines, county spokeswoman Mary Enger said. It would not be allowed in neighboring St. Louis County or the city of St. Louis. Both have stricter guidelines because more than half of Missouri’s 10,317 confirmed cases, and about two-thirds of the state’s 562 deaths, have occurred there.

Alexis Duncan, an epidemiologist at Washington University in St. Louis, said the return to some form of normalcy should start with low-risk activities involving small gatherings. She believes it’s too early for larger events.

“Especially sporting events where people are doing a lot of yelling, where they’re exhaling more,” Duncan said. “The more talking and yelling that people do, the more potential there is that they’re expelling the virus particles.”

In Branson, dozens of shows and attractions are scheduled to reopen this weekend and next.

The Duttons, featuring a family with three generations of musicians, will restart their show Saturday. The 811-seat theater will be kept at 25% capacity.

Sheila Dutton said her family is eager to perform again.

“If we get any feeling that it’s dangerous or that it’s not time, we’ll close it again, but right now it just feels right,” Dutton said.

Many large venues aren’t ready to reopen, and many major concerts have been canceled through much of the remainder of the year.

Steve Schankman of Contemporary Productions, a St. Louis-based live event marketing and entertainment company, said some smaller venues will probably resume concerts later this year, but the bigger shows are probably gone until 2021 at the earliest. The money simply isn’t there, venues are concerned about lawsuits if patrons get sick, and musicians are hesitant to risk their own health.

“Until there’s a vaccine there’s a lot of artists that aren’t going out on the road,” Schankman said.

He offered advice for patrons once concerts do resume: Expect to wait in line for a temperature check before entering, and expect to be required to wear face coverings.

The season is also in doubt for the nation’s oldest and largest outdoor musical theater. The Muny in St. Louis has never missed a season in its 102 years of existence “through war and recession,” managing director Kwofe Coleman said.

Two of the seven summer shows have been canceled, and a final decision on the rest will be made June 8.

Patrons can be spaced for seating, but Coleman wonders about the practicality of keeping people separated in the parking lot or as they stand in line for snacks. Then there’s the safety of the cast.

“If you have a scene where two people kiss or hug or share a moment, how does that happen? How do you rehearse singing with a mask on?” he asked.

Casinos also are reopening soon. All 13 casinos in the state, closed since March 17, can reopen June 1, the Missouri Gaming Commission said.

Missouri Department of Health and Senior Services Director Randall Williams said the state is providing hospitals with a drug that shows promise in helping some COVID-19 patients recover. Williams said that once additional shipments are sent Friday or Saturday, remdesivir will be available for all 129 Missouri patients currently on ventilators.

For most people, the coronavirus causes mild or moderate symptoms that clear up after two to three weeks. For some, especially older adults and people with existing health problems, it can cause more severe illness, including pneumonia and death.