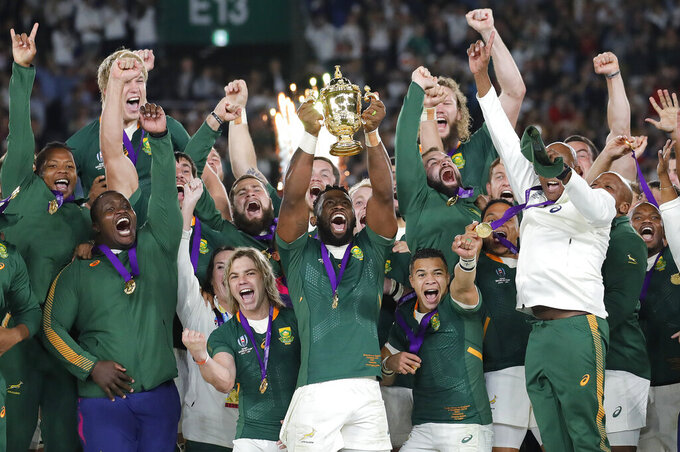 CAPE TOWN, South Africa (AP) — The Springboks will finally get to play as world champions nearly two years on from winning the Rugby World Cup after announcing on Monday two home tests against Georgia in July to prepare for the series against the British and Irish Lions.

The Georgia games will be South Africa's only warmups for its once-every-12-years series against the Lions, which starts later the same month.

The Springboks' 2020 schedule was wiped out by the coronavirus pandemic and the team's last game was the 32-12 win over England in the World Cup final in Japan in November 2019. ‘New’ Springboks coach Jacques Nienaber has been in the job for more than a year but has yet to take charge in an international. By the time the Springboks take the field against Georgia they will have been out of action for 20 months.

The Springboks will play Georgia on the weekends of July 2-3 and July 9-10, SA Rugby said, with exact dates and venues to be confirmed.

“I am sure it will lift the spirit of the players,” said Nienaber, who was appointed in January 2020. “We can now accelerate our preparations for our return to test rugby.”

The British and Irish Lions are due to start their tour of South Africa on July 3 and play three tests against the Springboks on July 24, July 31 and Aug. 7.

Their schedule may still change because of COVID-19.

Reports say all the Lions' games in South Africa will now be in Johannesburg, Pretoria and Cape Town, instead of the six cities they were due to visit. South African broadcaster SuperSport, the host broadcaster of the series, published a revised schedule this weekend showing the changes, which also switched the venue of the first test from Johannesburg to Cape Town, with the last two tests now in Johannesburg.

No schedule changes have been confirmed by SA Rugby or the British and Irish Lions, but tour organizers have previously said changes are possible in view of the bio-bubble the Lions players and management will likely have to operate in while in South Africa.

South Africa is the worst-affected country in Africa by COVID-19 caseload, with more than 1.5 million confirmed cases and more than 50,000 deaths. It has 35% of the reported cases in all of Africa. South Africa also has a variant experts say is more contagious and the country of 60 million people is expected to experience a third wave of cases in June and July, the middle of the winter in the Southern Hemisphere.

It came as a surprise when South Africa and the Lions announced in March that the tour would go ahead amid the pandemic. It was expected to either be switched to Britain or postponed.