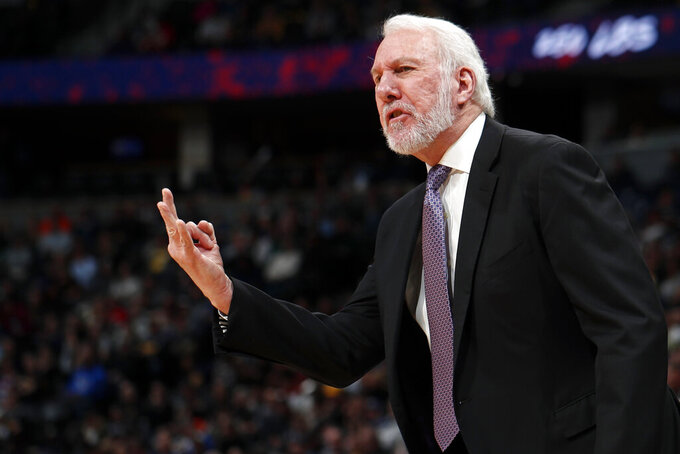 The San Antonio Spurs will try to extend the longest active playoff streak in North American major sports without LaMarcus Aldridge and with a decent mathematical chance to sneak into the final postseason spot in the Western Conference.

The 22-season run is on the mind of guard Patty Mills, along with coach Gregg Popovich's view that the Spurs will be more preoccupied with the future than whether they avoid missing the playoffs for the first time since a couple of months before they drafted Tim Duncan in 1997.

“It’s important,” Mills said of trying to extend the streak. “It’s one element of the big picture of the San Antonio Spurs organization and how well the team has done over the course of a couple of decades.

Aldridge had shoulder surgery in April, about six weeks after the pandemic shut down sports, and the Spurs announced last month he wouldn't play when the season resumed.

The seven-time All-Star's absence puts most of the burden on leading scorer DeMar DeRozan if the Spurs are to challenge eighth-place Memphis, which would only happen if they can emerge from the five-team cluster that rounds out the Western Conference in the 22-team restart.

The Spurs can force a play-in series by staying within four games of the Grizzlies, and they'll likely have a pretty good idea right away of their chances. The first two games are against Memphis and Sacramento, which is a half-game ahead of San Antonio.

“We’re not here for no reason,” DeRozan said. “Definitely develop and compete at the same time. Once you keep that mindset of going out there and winning, anything can happen. Despite whatever the odds, percentages may be, you can’t feed into that.”

With Aldridge out, the focus also shifts to young point guards Dejounte Murray and Derrick White, who have struggled under heightened expectations. Because of the shortened year, the Spurs are already guaranteed their first losing season since going 20-62 in 1996-97 and getting the No. 1 pick that led to Duncan.

Aldridge is joined on the sidelines by forward Trey Lyles, a starter who averaged 20 minutes per game. Lyles won't play after undergoing an appendectomy. Center Jakob Poeltl missed the last five games before the shutdown with a right knee sprain but is active for the restart.

The Spurs had one of their better pre-pandemic wins by beating Dallas the night before the shutdown. The problem was, that came two nights after one of their worst losses, to lowly Cleveland in overtime. It was the second straight game a franchise that always prided itself on defense gave up more than 130 points to an East also-ran.

The four-time All-Star will always be known as the centerpiece of the trade that sent Kawhi Leonard to Toronto. The Raptors went on to their first championship in Leonard's only season there, while the Spurs lost in the first round for the second straight year.

Now the question is what's next with the $139 million, five-year contract DeRozan signed with Toronto set to expire. The 11th-year player and six-time playoff qualifier will be an unrestricted free agent. DeRozan turns 31 next month.

“With everything that’s going on, it’s hard to even know what tomorrow’s going to bring, honestly,” he said. “So you’ve got to worry about the moment that you’re in.”

If the playoff streak ends, the Spurs will fall short of the team they replaced at the top. Detroit made the NHL playoffs 25 straight seasons before its current four-year run without qualifying for the postseason.