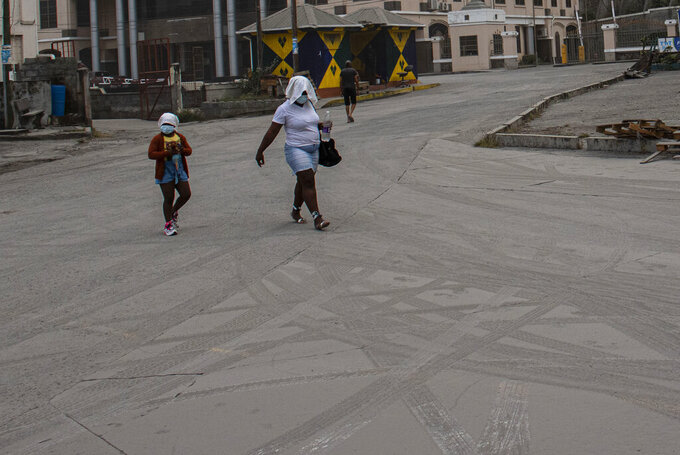 A woman and a girl walk wearing protective head coverings walk on a street covered with volcanic ash a day after the La Soufriere volcano erupted, in Kingstown, on the eastern Caribbean island of St. Vincent, Saturday, April 10, 2021. (AP Photo/Lucanus Ollivierre)

KINGSTOWN, St. Vincent (AP) — Officials in St. Vincent said Thursday that they were extremely worried about a COVID-19 outbreak given the lack of water and more positive cases being reported as thousands of evacuees fleeing the erupting volcano crowd into shelters and private homes.

About a dozen cases have been reported in recent days, with at least five evacuees staying in two homes and one shelter testing positive, exposing at least 20 people to the virus, said Dr. Simone Keizer-Beache, chief medical officer on the Caribbean island.

Keizer-Beache said officials are preparing to do massive testing as part of contact tracing, a complicated undertaking given that between 16,000 to 20,000 people were evacuated before La Soufriere's explosive eruptions started on Friday. She also urged people to keep wearing masks and asked them to cooperate, noting that some who arrive at shelters do not want to be tested, which is voluntary.

“Let us work together to prevent a second catastrophe,” she said in a press conference broadcast by local station NBC Radio.

Complicating efforts to fight COVID-19 is the lack of water in some communities given the heavy ashfall, with people walking or driving to spigots with buckets and jugs in hand as long lines formed.

Among those in line was Suzanne Thomas, a 46-year-old saleswoman from South Union, a community in eastern St. Vincent that has been hit with water shortages since Saturday. She had welcomed nine evacuees into her home who are huddled together, sleeping only on rugs and blankets.

“It’s real rough. We have to use one jug of water to shower, brush your teeth and flush the toilet,” she said, laughing as she added: “Water conservation.”

Others, like 17-year-old Kevin Sam, said they’ve had no water at all since Saturday: “I’m glad that these stand pipes are available, ‘cause I don’t know what we would’ve done. It’s not easy to bathe with half a bucket.”

Meanwhile, supplies were non-existent or running low at some government shelters.

Lisa May, 36, said she and her three children were sleeping on the floor at a shelter in the capital of Kingstown and hoped they would soon have at least one mattress to share: “Any little help we get, we (would be) grateful.”

More than 4,000 people are staying in 89 government shelters. Meanwhile, the government so far has registered more than 6,000 evacuees in private homes, a number that keeps growing, said Prime Minister Ralph Gonsalves.

He said he worries about an uptick in COVID-19 cases in certain areas given dwindling water supplies or complete lack of water.

“If we’re not careful, we’re going to have a spike, which could create a real danger in addition to what we’re having with the volcano,” he said. “Washing your hands when you don’t have a lot of water is problematic.”

Long lines formed at those trucks and at money transfer companies, with some standing for hours to retrieve cash from loved ones.

“I’ve been here since 4:30 this morning,” said Joseph King, a 67-year-old plumber, adding that he was tired and hungry.

La Soufriere is expected to keep erupting for days or even weeks, with a scientific team expected on Thursday to estimate the amount of gases expelled by the volcano and gather samples of pyroclastic flow material. Those analysis will tell scientists how the volcano is behaving and help them guess what it’s likely to do in the future, said Richard Robertson, who is leading the team for the University of the West Indies’ Seismic Research Center.

The volcano had a minor eruption in December, and prior to that erupted in 1979. A previous eruption in 1902 killed some 1,600 people.