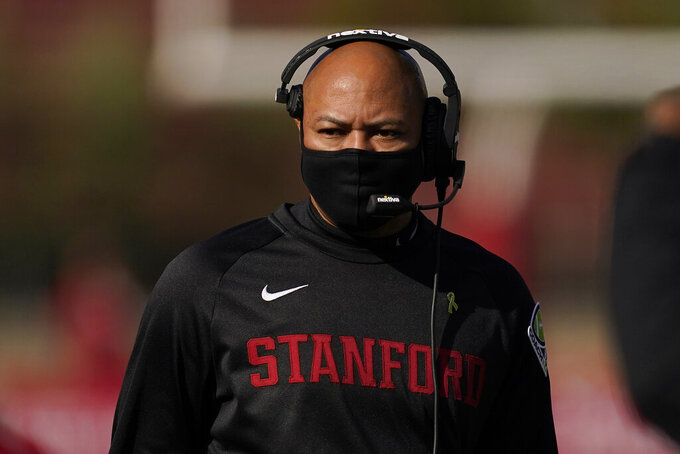 Stanford head coach David Shaw walks on the sideline during the first half of an NCAA college football game against Colorado in Stanford, Calif., Saturday, Nov. 14, 2020. (AP Photo/Jeff Chiu)

STANFORD, Calif. (AP) — Stanford's David Shaw shared some advice with his players this week that the coach's mother gave him years ago about pushing forward with positivity when tough choices must be made.

“One of the things I live by, no matter how difficult the decision that you have, once you make a decision, you go forward with enthusiasm and do it to the best of your ability, and that's just where we are,” Shaw said.

The Cardinal have had to scramble in recent days given Santa Clara County's ban on sporting events and practices for three weeks. They relocated to the Pacific Northwest, making sure all protocols for coronavirus testing were in place for a prolonged road trip.

After Saturday's game at Washington, Stanford (1-2) will head south to Corvallis, Oregon, ahead of a game with Oregon State.

Shaw expressed his gratitude to Washington for allowing Stanford to practice at the opponent's indoor facility Monday night. The Cardinal made other arrangements for the remainder of the week with workouts scheduled at high school fields.

The 10th-year Cardinal coach refuses to get rattled by things he can't control — a longtime mantra of his that has become especially important in 2020. Even if Stanford had to make adjustments on the fly just after the thrill of beating rival California 24-23 in the Big Game last Friday.

“Frustration doesn't do anything for me,” Shaw said.

He understands the questions that were asked so many times as he served on two different committees months ago evaluating the situation for sports: “Should we?" and “Can we?”

“The ‘should we’ is always answered by the student-athletes,” Shaw said Wednesday, speaking on Zoom from Seattle. “When things like this come up where the county of Santa Clara, in their efforts to stem the tide of this virus, made a decision to try to save lives, to try to help the people in this community. So, should we continue to play? Should we find a way to play? Our student-athletes have worked extremely hard and been through a lot from last March when we couldn't finish spring football. Talked to our student-athletes, and they want to play."

The Cardinal aren't the only Bay Area team on the move in light of the restrictions in Santa Clara County.

The second-ranked Stanford women's basketball team will no longer have home games Friday and Sunday against the Washington schools, though the team hopes to play them soon somewhere else. In the meantime, they have scheduled a game at UNLV on Saturday against former Stanford player and assistant coach Lindy La Rocque, who is in her first year coaching the Rebels.

“When this is done I could write a book!” Hall of Fame Stanford coach Tara VanDerveer said by text message.

The Cardinal men's basketball team is remaining in North Carolina after the Maui Invitational.

The San Francisco 49ers moved their operations to the Arizona desert and the Cardinals’ training camp facility, while San Jose State's football team practiced at a high school in nearby Santa Cruz County and will play at Hawaii on Saturday instead of at home.

Stanford athletic director Bernard Muir said in a statement Wednesday that any players who decide to opt out will still have their scholarships honored. Junior fullback Jay Symonds is among several players who opted not to travel with the team.

“Since the county issued its latest directive, we have explored and pursued opportunities to temporarily relocate our three programs scheduled to participate in Pac-12 competitions between now and the Dec. 21 expiration date of the current directive," Muir said.

“We will continue to monitor the local and national landscape, collaborate with university and county officials and health experts, and make informed decisions that we believe are in the best interest of our student-athletes, the vast majority of whom continue to express a strong desire to compete alongside their teammates and coaches, so long as they can do so without unduly jeopardizing the health and safety of others or themselves.”