A star-studded list of NFL players looking for 2020 rebound 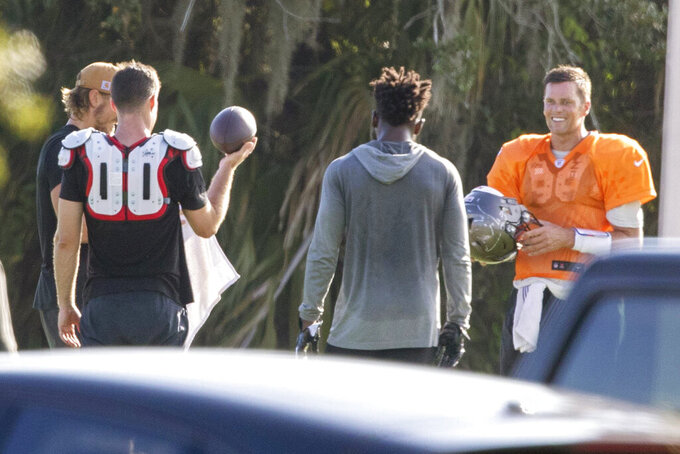 FILE - In this June 23, 2020, file photo, Tampa Bay Buccaneers NFL football quarterback Tom Brady, far right, is seen along with other players during a private workout at Berkeley Preparatory School in Tampa, Fla. Brady is looking for a big bounce-back this season. (Chris Urso/Tampa Bay Times via AP, File)

Miller’s performance last season was nothing to scoff at considering he had eight sacks and made his eighth Pro Bowl. But his five-year run as an All-Pro first- or second-team selection came to an end and the Denver Broncos’ playoff drought persisted.

“I didn’t play to the ‘Sack Master’s’ standards,” Miller said. “My coaches felt like there was more for me to give. Most of all, I feel like I can give more and I can be more. I don’t feel like I’m finished yet.”

Neither does Tom Brady nor JuJu Smith-Schuster or Baker Mayfield, among the other big names looking for big bounce-backs in 2020.

Miller, the biggest NFL star to contract COVID-19, made the most of his home gym after recovering from the virus, hitting the weights hard and sharing videos and photos of his bulging muscles and extreme workouts on social media.

“I didn’t take any days off, I didn’t go on any vacations and I didn’t do anything but work out,” Miller said.

“I do sense that he’s got a hunger to his game and to his attitude that I don’t think he’s had the last few years,” coach Vic Fangio said.

“We do sprints and he’s always out front,” safety Justin Simmons said.

“He’s been the most motivated I’ve seen,” linebacker Bradley Chubb agreed. “He’s going to have a monster year.”

Miller said he realized he wasn’t tapping his full leadership potential when he read “The Mamba Mentality” following Kobe Bryant’s death and again when he watched the Michael Jordan documentary “The Last Dance.”

Joining Miller on a comeback campaign in Denver this season is Chubb, Miller’s pass-rushing partner who blew out a knee in September.

Chubb expects to be ready to go on opening night Sept. 14.

“I'm easing back into practice and getting my flow back to where it was," Chubb said. "I feel like I’ll be good for Week 1, for sure.”

Like Miller, Brady put up decent numbers in 2019, but he sputtered down the stretch along with the rest of the Patriots, who followed their 8-0 start with a 4-5 finish, capped by their home loss to Tennessee in the playoffs. That was Brady’s farewell to New England after two decades and six rings. Grownkowski came out of retirement to join Brady in Tampa, where the Bucs are sure they’ll end their 12-year playoff drought.

Smith-Schuster paid the price after Roesthlisberger suffered a season-ending elbow injury in Week 2. After catching 111 passes for 1,426 yards and seven TDs in 2018, Smith had 42 catches for 552 yards and three TDs. Big Ben is back and so is James Washington (16.7 yards per catch). Pittsburgh also drafted Notre Dame’s big receiver Chase Claypool. That should open things up for Schuster underneath to return to his 2018 form.

Like Schuster, Hilton was adversely affected by injuries and spotty quarterback play last year when he set career lows with 45 receptions for 501 yards. Now he has Rivers throwing to him. Rivers was intercepted a whopping 20 times last year in L.A. to go with his 23 TD tosses. That followed an effective two-year stretch in which Rivers averaged 30 touchdown throws and 11 interceptions.

Mayfield followed a 27-TD rookie season with a step back under Freddie Kitchens, and Beckham was never himself as he played through a sports hernia. Beckham is healthy again following offseason surgery and seems a better fit in new coach Kevin Stefanski’s play-action system, which also should help settle Mayfield, who had 21 interceptions in 2019 to go with 22 touchdown passes.

The league's highest-paid defender followed his smashing debut season in Chicago with a rather pedestrian 2019 that saw him tally 8½ sacks, his fewest since his rookie season in 2014. Although he had the same number of tackles — 47 — as he did in 2018, Mack’s 14 QB hits ranked 46th in the NFL and his eight tackles for loss ranked 61st, numbers not befitting his $141 million contract.