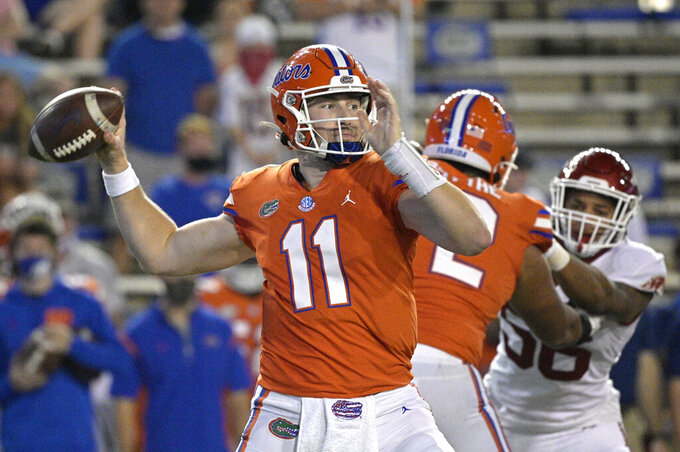 Florida quarterback Kyle Trask (11) looks to throw a pass during the first half of an NCAA college football game against Arkansas, Saturday, Nov. 14, 2020, in Gainesville, Fla. (AP Photo/Phelan M. Ebenhack)

The way Florida's Kyle Trask is going, 60 would be very possible for him if not for the COVID-19 pandemic shortening schedules.

Trask, after throwing for six TDs for a second time this season in sixth-ranked Florida's 63-35 win over Arkansas, has 28 in six games.

If he continues his pace of 4.67 per game, he would throw 56 if the Gators play all 10 of their regular-season games, go to the SEC championship game and play in a bowl. If he carried it through one or two College Football Playoff games, the record would be in sight.

Only four FBS quarterbacks have thrown for more than 50 TDs in a season.

Trask had five of his six TDs against Arkansas in the first half, and his 28 TDs are the most through six games in SEC history.

The fifth-year senior goes on the road this week to face a Vanderbilt defense that's allowed opponents to throw for 15 touchdowns, third-most in the SEC, and complete better than 72% of their passes.

Trask's body of work has overshadowed North Carolina's Sam Howell and Central Florida's Dillon Gabriel. Howell threw six TD passes in a 59-53 win over Wake Forest and has 23 in eight games. Gabriel has had five TD passes in a game twice this season and has 23 in seven games.

BEARCAT ‘D’ IS A BEAR

Cincinnati limited East Carolina's Horton Ahlers to 87 passing yards in a 55-17 win. A year ago, Ahlers threw for 535 yards on the Bearcats.

The Bearcats intercepted three passes for the second time this season and recorded four sacks while holding the Pirates to their second-fewest passing yards since 2007.

South Carolina's Kevin Harris rushed for a national season-high 243 yards and a school-record five touchdowns on 25 carries in a 59-42 loss to Mississippi.

Harris was the 10th player this season to run for 200 yards and joined Alabama's Najee Harris as the only players to rush for five TDs.

PILING UP THE YARDS

IT’S NOT ALL ABOUT YARDS

Penn State is the second team this season, and sixth since 2015, to have 500 yards of offense and hold its opponent to under 300 — and lose.