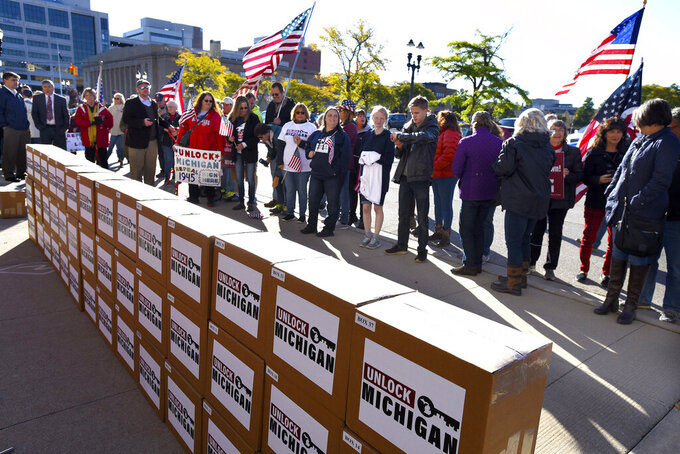 FILE - In this Oct. 2, 2020 file photo, a group gathers as boxes filled with petition signatures are delivered by Unlock Michigan to the Michigan Department of State Bureau of Elections in Lansing, Mich. The Michigan Supreme Court on Friday, June 11, 2021, unanimously ordered the state elections board to certify a veto-proof initiative that would let Republican legislators wipe from the books a law Gov. Gretchen Whitmer used to issue sweeping pandemic orders. (Rod Sanford/Detroit News via AP, File)

LANSING, Mich. (AP) — The Republican-controlled Legislature can repeal a law that was the backbone of Gov. Gretchen Whitmer’s coronavirus orders, without her interference, after a unanimous decision Friday from the Michigan Supreme Court.

The order to certify the ballot measure came after two Democrats on the Board of State Canvassers opposed ratifying it in April, despite a finding from the elections bureau that enough signatures — 460,000 — had been collected. The justices, four Democrats and three Republicans, said the panel “has a clear legal duty to certify the petition.”

The board's Democrats had called for further investigation into alleged wrongdoing by paid circulators.

For months, the Democratic governor acted under the 1945 emergency powers law to issue and keep intact restrictions on the economy to reduce the spread of COVID-19. The Supreme Court — then controlled by Republicans — declared the law unconstitutional in a 4-3 ruling last fall, but the conservative group Unlock Michigan wants to kill it to prevent a future court from deciding differently.

Since the decision, Whitmer has turned to the state health department to tighten and ease restrictions under a public health law. Indoor capacity limits will go away on July 1, as will most mask requirements.

The canvassers will meet soon to certify the petition. The GOP-controlled Legislature will likely enact the measure rather than let it go to a public vote in 2022. The governor could not veto it.

“We urge the Michigan House and Senate to act promptly to finally strike this awful law from the books forever,” said Unlock Michigan spokesman Fred Wszolek. “Gov. Whitmer used this law recklessly to crush businesses, families and lives. No governor should be able to do so ever again.”

Whitmer has said her orders curbed the spread of the virus and saved lives. They were backed by medical officials.

Since Michigan's current constitution took effect nearly 60 years ago, lawmakers have approved citizens' initiatives nine times — all since 1987. Republicans most recently did so in 2018 as part of an unprecedented maneuver to scale back voter-proposed minimum wage and paid sick leave measures to make them more business friendly.

Critics say the process makes Michigan an outlier and has been abused by special interest groups that can get around a governor by gathering signatures from voters who represent as little as 8% of the most recent gubernatorial vote. Supporters counter that the provision has been in the constitution for a long time and people who criticize it reverse course if there is an initiative they like.

Democratic state Attorney General Dana Nessel has said investigators found "sleazy tactics” by Unlock Michigan circulators and trainers but nothing that would stand up in court as crimes.

Unlock Michigan spent nearly $1.9 million to gather the signatures. Nearly $1.1 million came from Michigan Citizens for Fiscal Responsibility, a nonprofit linked to a political firm that works with the Senate GOP. The nonprofit does not have to publicly disclose its donors. Michigan! My Michigan!, which also is tied to the firm and Senate Majority Leader Mike Shirkey, gave $550,000.