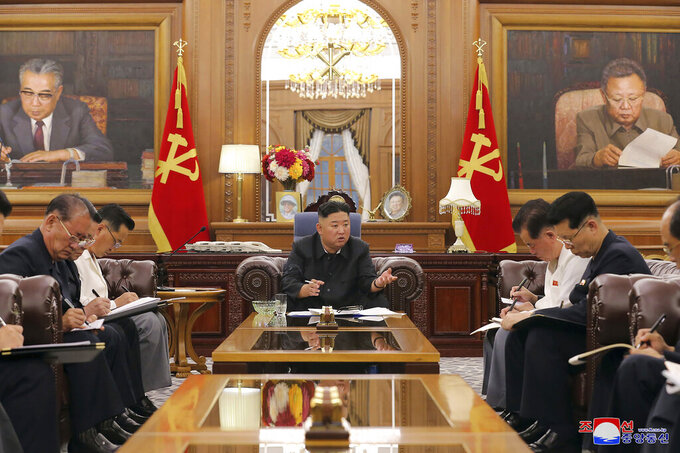 The Korean Central News Agency said Kim held his consultations Monday in preparation for a meeting of the Workers’ Party’s powerful Central Committee at which they will discuss state affairs for the first half of 2021. The meeting was set for early June and could take place as early as this week.

Kim's plans were not specified but were described as intending to bring “tangible change" to stabilizing the economy and people's living conditions.

The North Korean economy has been crippled by decades of mismanagement, U.S.-led sanctions over Kim’s nuclear weapons program and the coronavirus pandemic. South Korean officials say there are no signs North Korea is easing the border controls it imposed at the start of the pandemic or importing more industrial and agricultural materials to boost production.

The Workers’ Party last held a plenary meeting of Central Committee members in February, when Kim ripped into state economic agencies for their “passive and self-protecting tendencies” in setting their annual goals.

Earlier in the year, at the party's first congress since 2016, Kim urged his people to be resilient in the struggle for economic self-reliance and called for reasserting greater state control over the economy, boosting agricultural production and prioritizing the development of chemicals and metal industries. Those sectors have been critically depleted by sanctions and halted imports of factory materials amid the pandemic.

Kim has shown unusual candor in addressing the North’s economic problems in recent political speeches, saying that the country was facing its “worst ever” situation due to COVID-19, sanctions and heavy flooding last summer that decimated crops. He even called for his people to brace for another “arduous march,” a term that had been used to describe a 1990s famine that killed hundreds of thousands.

In a meeting of the Workers' Party's political bureau last week, Kim expressed appreciation that a lot of economic works were being sped up thanks to the “ideological enthusiasm and fighting spirit of self-reliance” demonstrated by the party and his people. But he also said there was a need to correct unspecified “deflective matters," which he said would be discussed at Central Committee's plenary meeting.

While North Korea monitoring groups have yet to detect signs of mass starvation or major instability, some analysts say conditions could be aligning for a perfect storm that undercuts food and exchange markets and triggers public panic.

The Geneva-based Assessment Capacities Project, a nonprofit that specializes in humanitarian needs assessment, said in May that it considers North Korea to be at high risk of a humanitarian crisis. It said poor economic governance, repressive political measures and an increasing dependence on internal production amid a cutback in imports have negatively impacted the country’s population.

“Chronic food insecurity and limited access to basic services, such as health care and clean water, have left more than 10 million people in need of humanitarian assistance,” the group said.

The economic setbacks have left Kim with nothing to show for his ambitious diplomacy with former President Donald Trump, which failed to bring the North sanctions relief, and the North has so far ignored the Biden administration’s calls to resume dialogue.

Some experts say Kim could use the upcoming Central Committee meeting to address the stalled diplomatic efforts.