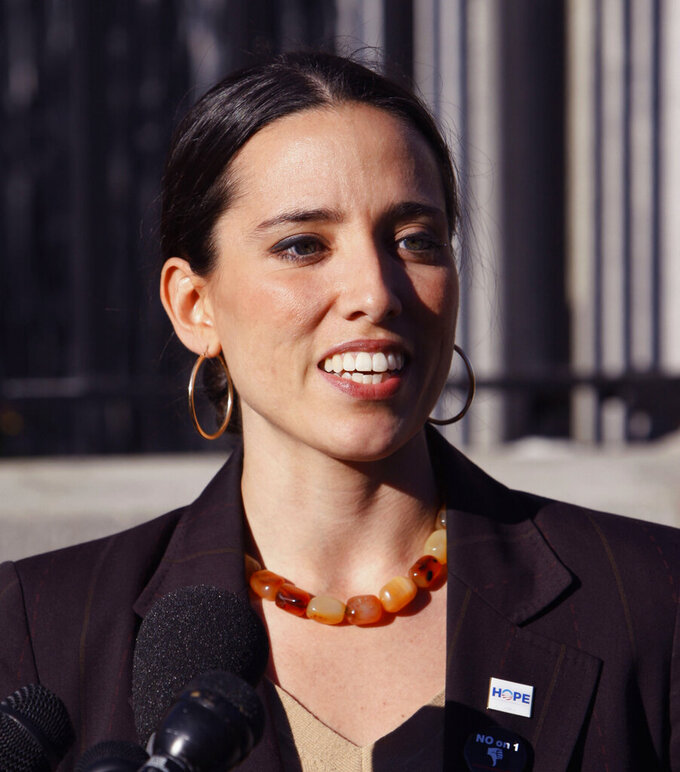 FILE - In this Oct. 31, 2008 file photo, Sonia Chang-Diaz speaks at a news conference in Boston. Mass. State Sen. Sonia Chang-Diaz, a critic of Republican Gov. Charlie Baker's handling of the coronavirus pandemic, announced, Wednesday, June 23, 2021, that she is running for Massachusetts governor next year — adding another Democrat candidate to a burgeoning campaign. (AP Photo/Bizuayehu Tesfaye, File)

BOSTON (AP) — State Sen. Sonia Chang-Diaz, a critic of Republican Gov. Charlie Baker’s handling of the coronavirus pandemic, announced Wednesday that she is running for Massachusetts governor next year — adding another Democrat candidate to a burgeoning campaign.

Chang-Diaz, who had previously announced that she was considering a campaign, made the decision public in a video released Wednesday morning.

In the video, the Democrat talks about her family history and ticks off key issues, from support for the proposed so-called “millionaire tax” constitutional amendment to closing the racial wealth gap in Massachusetts.

“Our state is at a turning point now and we face a choice. Do we go back to business as usual or do we run toward problems with the urgency and determination to solve them?” she says in the video. “That’s the kind of fire we need in government.”

Chang-Díaz, the only woman of color in the Massachusetts Senate, is the daughter of a social worker and the country' first Latino astronaut, Franklin Chang-Díaz. She was elected as the state’s first Latina state senator in 2008. In 2019, she helped design education funding changes to provide $1.5 billion in new equitable aid to K-12 districts across the state.

Chang-Diaz is the latest Democrat to jump into the 2022 gubernatorial campaign.

Last week, Harvard University professor Danielle Allen pledged to “accelerate the pace of change” Tuesday when she officially kicked off her campaign for the Democratic nomination for governor of Massachusetts.

Allen is the first Black woman to run for governor in a major political party in state history.

The Cambridge resident has never held political office. She is a political theorist at Harvard, where she directors the Edmond J. Safra Center for Ethics.

Former state Sen. Ben Downing is the only other Democrat to announce a run.

Downing has said the state's current leadership has shown a “lack of urgency” to adequately address the coronavirus pandemic, racial inequity and climate change. He has said he will also prioritize child care, affordable higher education and transit investment.

The Pittsfield native, who currently lives in Boston, spent 10 years representing dozens of western Massachusetts communities in the Senate before stepping down in 2017.

Attorney General Maura Healey has also been seen as a possible candidate, although she has yet to say whether she is planning to run.

Healey has perhaps the highest political profile of any of the Democrats who have already announced or who are weighing a run.

On the Republican side, Gov. Charlie Baker has not yet announced whether he will seek a third term. If he opts out of another run, Lt. Gov. Karyn Polito, would be a likely GOP candidate to succeed him.

Massachusetts, despite a liberal reputation, has yet to elect a woman to the state’s top political post.