Statehouses could prove to be hothouses for virus infection 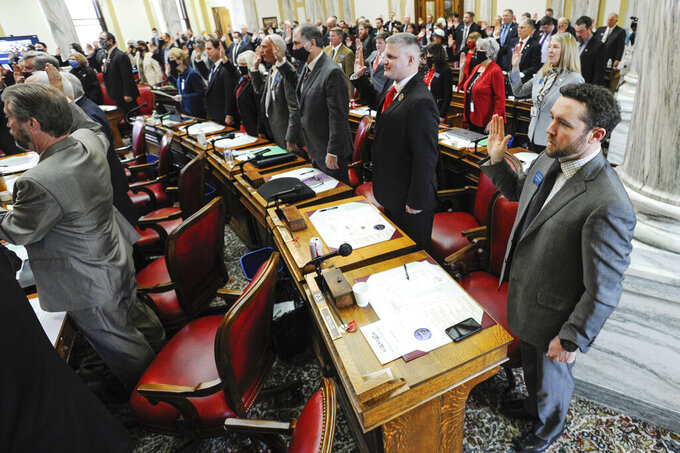 Legislators from the House of Representatives are sworn in to office at the State Capitol on Monday, Jan. 4, 2021, in Helena, Mont. (Thom Bridge/Independent Record via AP)

HELENA, Mont. (AP) — As lawmakers around the U.S. convene this winter to deal with the crisis created by the pandemic, statehouses themselves could prove to be hothouses for infection.

Many legislatures will start the year meeting remotely, but some Republican-controlled statehouses, from Montana to Pennsylvania, plan to hold at least part of their sessions in person, without requiring masks. Public health officials say that move endangers the safety of other lawmakers, staffers, lobbyists, the public and the journalists responsible for holding politicians accountable.

The risk is more than mere speculation: An ongoing tally by The Associated Press finds that more than 250 state lawmakers across the country have contracted COVID-19, and at least seven have died.

The Montana Legislature convened Monday without masking rules. The Republican majority shot down recent Democratic requests to hold the session remotely or delay it until vaccines are more widely available. Failing that, Democrats asked for requirements on masks and virus testing, which were also rejected.

Democratic lawmakers wore masks as they were sworn in. Few Republicans did the same.

“If the session is held without public health precautions, it is highly likely that the virus will spread in that environment, and it’s highly likely that we’ll see serious illness and, God forbid, deaths come from that,” said Drenda Niemann, the health officer in Lewis and Clark County, which includes the state capital of Helena.

Rather than address COVID-19 guidelines ahead of the session, Republicans decided to address them after lawmakers convene by creating a panel that will meet regularly to consider updating policies. The Senate president pro tem, Republican Jason Ellsworth, said the panel “allows us to be more fluid with the situation" and "allows for our personal freedoms and our responsibilities.”

The divergent approaches to the virus — with Republican lawmakers mostly rejecting mask mandates and lockdown measures, and Democrats urging a more cautious approach — mirrors that of Americans generally. That contrast was reflected over the holidays, when millions of people hit the roads and airports despite pleas from health officials to avoid travel and family gatherings to help contain the virus, which has claimed more than 350,000 American lives.

Some legislatures are trying to strike a balance between conducting business in person and protecting against the disease.

The 400-member New Hampshire House plans to hold its first session day Wednesday with a drive-in event at the University of New Hampshire in what acting Speaker Sherm Packard called the body's “most risk-mitigated session” yet during the pandemic.

The House clerk and speaker will conduct business from a heated platform, and members can watch and listen via a screen or through their car radios. Microphones will be brought to their windows for questions and debate, and voting will be conducted via electronic devices.

New Hampshire House Speaker Dick Hinch, a Republican, died from COVID-19 on Dec. 9, a week after being sworn in during an outdoor gathering at UNH. Democrats have pushed for remote gatherings.

Legislatures in Alaska, North Dakota, Pennsylvania and Washington are requiring masks, but the requirement is not being enforced in Pennsylvania. Lack of enforcement is a concern for news outlets that have to balance their ability to cover events with the safety of their reporters.

“If we start getting into a high-profile issue and there's a scrum of reporters shouting questions to a legislator who's unmasked, it couldn't be a worse situation,” said Paula Knudsen Burke, with the Reporters Committee for Freedom of the Press in Pennsylvania.

In Idaho, where lawmakers are not required to wear masks, Melissa Davlin of Idaho Public Television said media outlets are trying to keep reporters safe while also ensuring adequate access to lawmakers, many of whom are not adhering to the same public safety guidelines as newsrooms.

Casual hallway conversations “are so valuable for coverage and insight and even just background,” Davlin said. “Missing out on that is a real loss for our ability to cover the session. But at the same time, we are not going to do our viewers and readers any good if we get sick.”

Republicans in the Ohio House have blocked efforts to enforce a mask mandate, despite the fact that more than a dozen lawmakers there have tested positive for COVID-19.

Incoming Ohio Senate President Matt Huffman was to be sworn into office from his home Monday after testing positive for COVID-19. Huffman experienced mild symptoms and will return to the statehouse after a quarantine period, spokesperson John Fortney said.

In conservative Wyoming, where Republican Gov. Mark Gordon did not issue a mask mandate until early December, lawmakers plan to convene virtually Jan. 12 to hear the governor's State of the State address. Legislative leaders will decide later whether to begin a virtual session in February or hold an in-person session starting in March, the Wyoming Tribune Eagle reported.

Wyoming Republican Rep. Roy Edwards died a day before Election Day of what his family later confirmed was COVID-19. Edwards spoke in opposition to public health restrictions to prevent the spread of the coronavirus during his campaign.

In Montana, all floor sessions and committee meetings will be available to view or hear online, and lawmakers will be allowed to attend many hearings virtually, but voting on final bills by proxy is discouraged. Members of the public and lobbyists will be able to testify on bills using video conferencing, if they have access to the technology.

“I feel like that’s going to preferentially kind of censor the people who are either vulnerable or who actually value the advice that experts are putting out,” said M. Kumi Smith, assistant professor of epidemiology and community health at the University of Minnesota.

Ellsworth, the Republican Senate leader, acknowledged that the Legislature's COVID-19 panel will not solve everything.

“At the end of the day, this is an animal that we can’t control,” he said of the pandemic during a rules hearing on Dec. 16. “I would imagine we are going to have members that are going to get sick. It’s possible that we have members that die. But that possibility is there irregardless, even if we’re here or not.”