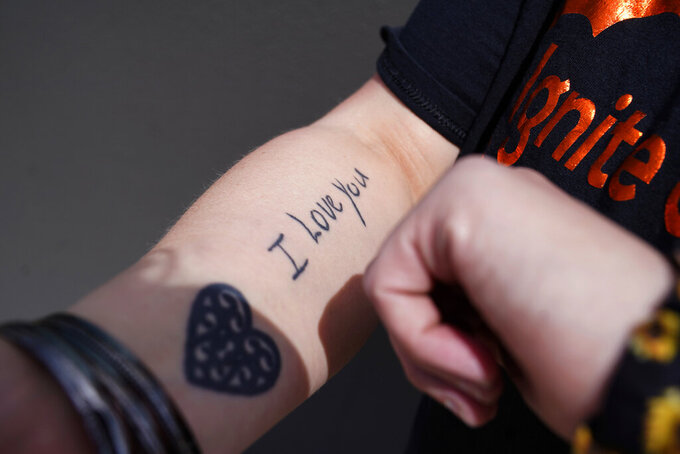 Carrie Shipp shows a tattoo on her arm for her children, April 2, 2021, in Irving, Texas. Shipp, whose 21-year-old son Matthew is incarcerated at Ruben M. Torres Unit in Texas, said her son decided not to get vaccinated out of fear and distrust of prison medical staff. Fewer than 20 percent of state and federal prisoners have received a COVID-19 vaccine, according to data collected by The Marshall Project and The Associated Press. “To have your child, someone you took care of be afraid of something that would protect them… I will lose sleep over it,” Shipp said. (AP Photo/LM Otero)

This week, Florida expanded eligibility for COVID-19 vaccines to all residents 16 and older. But across the state, more than 70,000 people still don’t have access to the vaccine. Those men and women are Florida state prisoners.

More than half the country has opened up vaccine eligibility, vastly expanding the ability for most Americans to get the shots, whatever their age or medical conditions. But inside prisons, it’s a different story: Prisoners, not free to seek out vaccines, still lack access on the whole.

Nationwide, less than 20% of state and federal prisoners have been vaccinated, according to data collected by The Marshall Project and The Associated Press. In some states, prisoners and advocates have resorted to lawsuits to get access. And even when they are eligible, they aren’t receiving important education about the vaccine.

And it's not just the prisoners. Public health experts widely agree that people who live and work in correctional facilities face an increased risk of contracting and dying from the coronavirus. Since the pandemic first reached prisons in March 2020, about 3 in 10 prisoners have tested positive and 2,500 have died. Prisons are often overcrowded, with limited access to health care and protective gear, and populations inside are more likely to have preexisting medical conditions.

“This is about a public health strategy,” said Jaimie Meyer, an associate professor of medicine and public health at Yale University. “If you want to see an end to the pandemic, you’ve got to vaccinate the people in the places where there are the largest clusters and the most cases.”

This story is a collaboration between The Associated Press and The Marshall Project exploring the state of the prison system in the coronavirus pandemic. Keri Blakinger contributed reporting from the Marshall Project.

In some facilities, basic supplies like soap and toilet paper have been scarce, and mask-wearing is inconsistently enforced among both prisoners and guards. Prisoners spend time in communal spaces, and open-bar cells do little to contain the virus. Prisoners describe entire dormitories being sick with COVID-19 symptoms.

Some prisoners hesitate to report symptoms out of fear they will be placed in solitary confinement and not receive proper care. Others report waiting days for medical care, sometimes being turned away or provided only with aspirin.

And the vaccine rollout has been uneven, despite guidance from the Centers for Disease Control and Prevention that states should prioritize corrections staff and people in prisons and jails. By the end of March, Arkansas and Florida had not yet begun vaccinating prisoners, while a few states say they have offered vaccination to every adult in their prisons. Eight states have not reported how many prisoners have been vaccinated.

In some states, vaccine supplies for prisons have been limited by infrastructure and by political demands. Even as more vaccines start to become available to corrections systems, prison officials, public health experts and prisoner advocates say there is widespread hesitancy among prisoners over receiving the vaccine.

According to the CDC, 40% of adults in the United States have gotten at least one vaccine shot, and President Joe Biden has promised that all Americans will be eligible for vaccination by May 1. But vaccination rates behind bars still trail the general population in two-thirds of states.

In Georgia, roughly 700 prisoners had been vaccinated by March 30, according to Department of Corrections spokesperson Joan Heath. That number, about 1.5% of the state’s prison population, is expected to jump by mid-April when the agency anticipates receiving 2,000 doses per week.

“Our goal is to ensure every offender in our custody is offered and receives a COVID vaccine,” she said, adding that the state is asking anyone with “incarcerated friends or loved ones, to encourage them to accept the vaccine when offered.”

Correction officials in Maine said they had just begun vaccinating “age-eligible residents,” with 125 prisoners, about 7% of the prison population, immunized by the end of March.

In Tennessee, prisoners had to wait months before they could begin receiving the lifesaving dose after an influential state advisory group determined that inoculating them too early could result in a “public relations nightmare” and “lots of media inquiries.” That decision came although some of the United States’ largest coronavirus clusters were inside Tennessee’s prisons, with hundreds of active cases in multiple facilities.

Tennessee’s top health officials eventually announced in March that some in the prison population could get the vaccine if they qualified by age or had certain health conditions.

To date, about one-third of Tennessee prisoners have tested positive for the virus since the outbreak began to spread. More than 40 have died.

By April 5, more than 6,900 prisoners — out of roughly 19,400 in the state — had received at least one dose of the COVID-19 vaccine. Starting Monday, Tennessee began to allow all residents 16 and older to receive the vaccine, meaning the remaining state prisoners would be eligible.

In some states, prisoners and advocates have resorted to lawsuits to speed up the pace of vaccinations. In February, a federal judge ordered Oregon officials to offer the vaccine to all state prisoners, which the state says it has now done. Washington state prisoners filed a similar lawsuit in late March, demanding additional protection from correctional staff who refused the vaccine. Last week, a New York Supreme Court justice ruled that that state must vaccinate all people incarcerated in prisons and jails.

Texas vaccinated its first 600 prisoners only because of an accident. After a freezer problem at the Darrington Unit left unrefrigerated hundreds of doses meant for correctional officers, officials offered the vaccine first to staff and then to high-risk prisoners to avoid the doses going to waste.

Vaccine availability is not the only factor corrections officials must grapple with to get shots in arms. Carrie Shipp, whose 21-year-old son Matthew is incarcerated at Ruben M. Torres Unit in Texas, said her son decided not to get vaccinated out of fear and distrust of prison medical staff. Shipp’s son encouraged her and her daughter to be vaccinated, but he does not want to receive the vaccine himself.

“It’s not like he doesn’t believe in science, he’s just fearful of what they might do to him, what they might give him,” Shipp said. “To have your child, someone you took care of, be afraid of something that would protect them. … I will lose sleep over it.”

In a Marshall Project survey of 136 prisoners earlier this year, many respondents expressed a deep distrust of prison medical systems, citing misinformation spread by staff and previous experiences of not receiving care.

Among the public, information about the COVID-19 vaccine has been publicized by news media, government officials and health care providers. But prisoners seeking such information must rely on limited news sources, personal correspondence and corrections staff, who prisoners say are not always willing to answer questions.

State prisons in Tennessee have displayed posters, distributed informational sheets and held town hall meetings among the prisoners to discuss the vaccine rollout. The Department of Corrections plans to “circle back” to the more than 3,100 prisoners who have refused the vaccine so far, said agency spokesperson Dorinda Carter.

Some prisoners in Georgia said they didn’t receive information about the vaccine until they were asked to sign a form indicating whether they wanted to receive it. Fifty-one-year-old Michael McCoy, who is serving a 50-year sentence in Autry State Prison, said a staff member came to his dorm and put the consent forms on a table in the middle of the room.

But when prisoners began to ask questions, McCoy said, “she refused to answer anything. She might not have known.”

Heath, the spokesperson for Georgia’s Department of Corrections, said prisoners received information printed from the CDC website, but she did not respond to questions about whether it was available before they received vaccination consent forms.

Shannon Ross is working with medical experts to fill information gaps through his newsletter, The Community, which he distributes to prisoners in Wisconsin and some federal facilities. Ross, who was released from prison in September, said it is crucial to involve prisoners in the development of informational materials because they have unique concerns and are more likely to trust information from people who have experienced incarceration.

He said the state correction departments have some information, “but they don’t really hit home at a lot of the doubts and concerns and the breadth of issues that are popping up with this vaccine,” Ross said. “There’s no commentary from people who are out here that are respected in fighting the system, to say, ‘I’ve gotten it, I trust it.’”

Because many states have yet to vaccinate the majority of their prison populations, the actual magnitude of vaccine hesitancy among prisoners is not yet clear.

Marc Stern, a correctional health consultant and professor at the University of Washington’s School of Public Health, did a survey of prisoners and those in jail late last year and found only 45% willing to get vaccinated. He said the potential for low vaccine acceptance could amplify existing inequities in prisoner health. Black people make up a disproportionately large segment of the prison population and people with severe COVID-19 outcomes, and his survey found that 37% of Black respondents were willing to receive the vaccine compared to 45% of all respondents.

On a brighter side, the four states that say they have offered the vaccine to every adult in their state prisons — Massachusetts, Oregon, Rhode Island and Virginia — have seen more prisoners take it, averaging about 70%. Meyer said that was a positive sign, but likely to be lower in many other states.

“In many prisons … the annual uptake of a flu vaccine is around 30%,” Meyer said. “Now you throw in that this is a newly developed technology that people may or may not have lots of information about, you have to anticipate that uptake might be as low as 30%.”

Complicating the equation are concerns about prison staff refusing vaccines in high numbers. Unlike prisoners, staff can receive vaccines from providers other than the corrections department, which can make staff levels difficult to track. Staff vaccination is particularly important, said Monik Jiménez, an assistant professor at Harvard University’s School of Public Health, because employees can travel between prisons and the outside community. She stressed that both staff and prisoners need high vaccine coverage in order to effectively reduce COVID-19 transmission.

“When you have a place with high rates of transmission, then the vaccine has to work even harder,” Jiménez said. “You need more people vaccinated.”

To encourage prisoners to receive the vaccine, some states have turned to incentives, ranging from $25 in commissary credit in Pennsylvania, to “a little bag of Famous Amos cookies” in Mississippi.

In Georgia, McCoy says that he and his dorm mates felt belittled when the warden announced that anyone who opted to take the vaccine would be rewarded with a “warden’s pack,” which usually includes an assortment of chips, cakes and candy.

“Instead of with confidence and trust, you’re going to bribe them with cookies and chips?” McCoy said. “What does he think we are?”