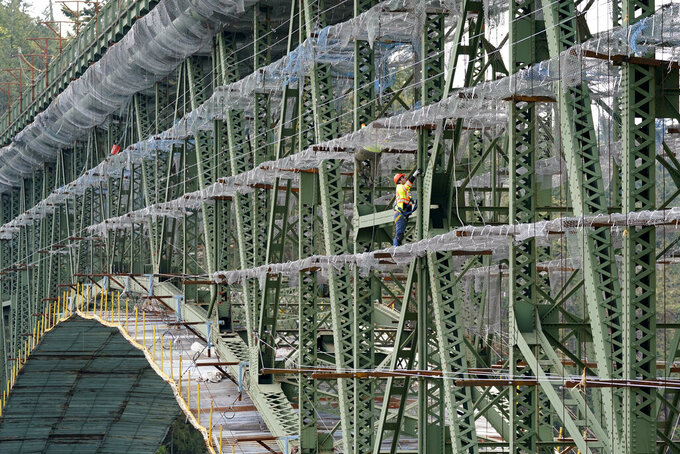 A worker stands on scaffolding attached to the Deception Pass Bridge, a 976-foot span about 180-feet above the waters below, as work to replace corroded steel and paint the structure continues Thursday, April 29, 2021, in Deception Pass, Wash. The 86-year old bridge, along with its 511-foot long companion Canoe Pass Bridge, spanning immediately to the north, connect Whidbey Island on the south to Fidalgo Island. Raising state taxes to improve roads and bridges is one of the few things many Republican and Democratic lawmakers have agreed on in recent years. Those efforts have slowed to a crawl this year, even as lawmakers acknowledge a widening gap between needed work and the money to pay for it. (AP Photo/Elaine Thompson)

JEFFERSON CITY, Mo. (AP) — Raising state taxes to improve roads and bridges is one of the few things many Republican and Democratic lawmakers have agreed on in recent years.

Those efforts have slowed this year, even as lawmakers acknowledge a widening gap between needed work and the money to pay for it. One reason: the federal response to the coronavirus pandemic.

Some states are “waiting to see what direction the federal government is going to be taking,” said Carolyn Kramer, an advocacy director with the American Road & Transportation Builders Association.

State lawmakers across the country have proposed fewer than 170 transportation funding bills this year — barely half the amount proposed during the last post-election year of 2019, according to the association. So far, not a single transportation tax increase has passed, though several are pending.

Kramer said states are still assessing the effects of the COVID-19 pandemic on their economies, but also are watching for a potential gusher of federal money. Numerous avenues exist for new federal road funding:

— President Joe Biden signed a coronavirus relief package that includes $350 billion for state and local governments. Some states such as Indiana and Maryland already are planning to spend part of that on transportation projects; others are awaiting federal guidance on using the money.

— Congress is working on a long-term renewal of the nation's main highway program that could direct billions more annually to states.

The American Association of State Highway and Transportation Officials has urged Congress to essentially double existing funding, with a $200 billion road-and-bridge stimulus, plus an additional $487 billion in a five-year highway program.

The proposals could add up to more federal road-and-bridge aid than at any time in years.

“It looks like a cruise ship sitting in a pond — that’s how much money we’re getting flowing into the state of Colorado from the federal government," said Colorado state Sen. Ray Scott, a Republican. “If Biden does get this pushed through and we have additional funding coming our way, why would we go after the taxpayer when we have ways we can handle it right now?”

While Scott wants to base any transportation plan on an influx of federal money, Democratic Gov. Jared Polis and the state's Democratic legislative leaders want to raise fees on gasoline sales, electric and hybrid vehicles, ride-sharing companies and retail delivery services.

“Colorado’s transportation system is so far behind that we need federal investment and we need state-level investment,” said Democratic state Sen. Faith Winter.

Colorado's gas tax has remained unchanged since 1991 while per capita spending on transportation has fallen by almost half. The new funding plan has yet to receive a legislative hearing, though Democratic lawmakers could still speed it through if they desire.

Bills to raise gas taxes already have failed this year in Arizona, Kentucky, Mississippi and Wyoming.

After the North Dakota House passed a 3-cent gas tax increase, the Senate solidly defeated it. The Legislature instead passed a $680 million infrastructure bonding plan aimed primarily at flood-control projects that also includes $70 million for roads and bridges. The bonds will be repaid with earnings from the state's oil tax savings account.

“That money is frosting on the cake," Wardner said.

Louisiana state Rep. Jack McFarland, who spent months traveling the state to pitch a gradual 22-cent gas tax increase, decided to drop the idea in the face of opposition from fellow Republicans. He said it was hard to persuade people to support a gas tax when the state is getting several billion dollars from the federal coronavirus relief package.

Economic restrictions ordered by governors to slow the virus' spread provided an initial hit to state revenues. But some states have rebounded to post budget surpluses buoyed by stronger-than-expected income tax revenue and federal aid.

“You cannot sell a tax increase to the public at a time when you’ve got something like $4 billion sitting in your checkbook. That’s just not going to happen,” said Minnesota state Sen. Tom Bakk, an independent who is a former Democratic majority leader.

The Democrat-controlled Minnesota House passed a transportation funding measure that would raise the vehicle sales tax and link the gas tax rate to inflation. But the Republican-led Senate scrapped all tax hikes while passing its own transportation bill.

Unlike many types of taxes, gas tax hikes for roads and bridges had garnered bipartisan support in recent years. Since 2013, at least 29 states — some led by Republicans, others by Democrats — have raised fuel taxes. But none have done so since Virginia lawmakers passed a gas tax increase in March 2020, shortly before the coronavirus shutdowns.

Washington state lawmakers gave themselves a nudge toward a future gas tax hike. The Democrat-led Legislature recently passed an environmental plan capping carbon pollution that will take effect in 2023 only if lawmakers pass a new transportation spending plan that raises gas taxes by at least 5 cents a gallon.

Fuel tax increases also have been proposed this year in Alaska and Missouri, which have the nation's lowest gas taxes. A bill to double Alaska's 8-cent-per-gallon gas tax advanced from a House committee in March but has not gone further.

Republican state Rep. Kevin McCabe, who opposes the increase, cited an economy still struggling from the pandemic and Alaska's high cost of living.

"Adding another almost 10 cents a gallon to the price of their commute, they just wouldn’t be able to handle it,” he said.

A proposal to phase in a 12.5-cent-a-gallon gas tax hike passed the Missouri Senate with bipartisan support and is pending in the House, where the top Republican has expressed resistance. The state's 17-cent-a-gallon rate hasn't changed since 1996.

At a recent House hearing, a lobbyist for Missouri gas stations highlighted Biden's infrastructure plan while suggesting lawmakers could pare back the proposed gas tax.

“I don’t think there is a program or plan coming from Washington, D.C., that will address the kind of shortfalls that we’ve seen," Schatz said.