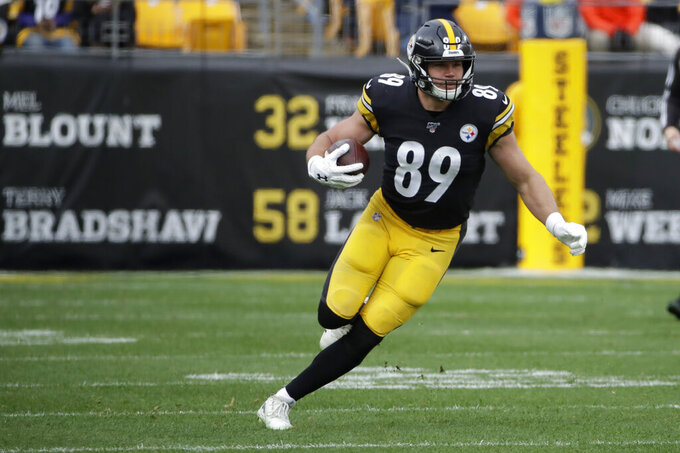 PITTSBURGH (AP) — Vance McDonald could sense last spring the end of his NFL career was in the offing.

The Pittsburgh Steelers tight end's urge to branch out beyond the football field — one that bubbled for years — came to a head during the early days of the COVID-19 pandemic.

“It just came down to feeling that call to just step away from football,” McDonald said.

And so he did, retiring on Friday after eight seasons to focus on both his charity foundation and the work that lays ahead on the western Pennsylvania farm he plans to turn into a retreat for Christian leaders.

McDonald kept the decision to himself until Pittsburgh's loss to Cleveland in the first round of the playoffs earlier this month. He approached close friend Ben Roethlisberger in the aftermath and the two embraced while fighting back tears.

“It wasn’t really about football,” McDonald said. “We just looked at each other and how thankful we are for the friendship.”

McDonald spent the first four years of his career in San Francisco before arriving in Pittsburgh on the eve of the 2017 season. He became a fan favorite for his physical play and intensity. He famously chased down Chicago's Marcus Cooper to prevent a touchdown following a blocked field goal early in his first year in Pittsburgh and planted Tampa Bay's Chris Canty into the turf on Monday Night Football in 2018 with a devastating stiff arm on his way to a 75-yard score.

“I will honestly miss holding the football and running into a human being as hard as I possibly can, because that is something I appreciate,” McDonald said with a laugh.

McDonald finishes his career with 181 receptions for 2,036 yards and 15 touchdowns. His playing time decreased in 2020 as Pittsburgh went to a more pass-heavy offense. The former second-round pick in the 2013 draft played on just 44% of Pittsburgh's offensive snaps this season, down from 69% in 2019 and 51% in 2018.

The Steelers held a 2021 club option worth $5.2 million for McDonald, who caught just 15 passes for 99 yards in his final season. McDonald's retirement likely kept Pittsburgh's front office from letting him walk this spring and McDonald had no interest in starting over elsewhere.

“I know there’s going to be a lot of changes with the Steelers moving forward,” McDonald said, later adding, "I’m very, very happy to retire a Steeler. I’m very happy to do it on my own terms.”

McDonald is Pittsburgh's 2020 nominee for the Walter Payton Man of the Year Award, given annually to a player who makes a significant positive impact in their community. McDonald and Roethlisberger started the Trucks of Hope campaign during the spring, a drive that brought trucks full of nonperishable food, PPE and cleaning supplies to over 1,000 families in Western Pennsylvania.

The program only deepened McDonald's resolve to move on to the next phase of his life. He and his wife Kendi established Hidden Meadows Retreat in Ligonier, Pennsylvania — about an hour east of Pittsburgh — to create a place where “faith-based leaders, non-profit teams, and others can find respite, refreshment and renewal."

McDonald spent time on the COVID-19 reserve list this season after testing positive for the novel coronavirus shortly after a win over Dallas on Nov. 8. He missed two games while in the protocol and his playing time fluctuated wildly upon his return.

McDonald said his bout with the virus only reinforced his decision that it was time.

“It created even a bigger fire underneath me, it stirred more passion in me to get (Hidden Meadow) up and running," McDonald said.

McDonald offered no insight into whether Roethlisberger — who he sat next to in the locker room for the final three seasons of his career — will return for an 18th season in 2021, though he believes Roethlisberger “can still play at a high level.”

Steelers coach Mike Tomlin praised McDonald's influence not only in the locker room but the city.

“He was a class act on and off the field, leading many of our efforts in the community while also being a voice for our social justice efforts and the community work during the pandemic,” Tomlin said in a statement. "I wish he and his family nothing but the best in his retirement and his continued work to be a pillar in the community.”