Steelers want Roethlisberger back ... if the math works 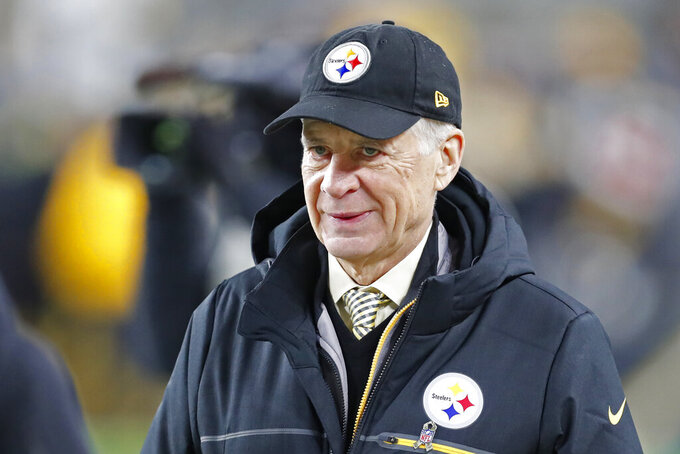 It's the money, however, that makes it tricky.

Team president Art Rooney II admitted on Thursday there is work to be done to lower Roethlisberger's scheduled $41.2 million salary cap hit before Roethlisberger can begin work on his 18th season in Pittsburgh.

The club has already broached the subject with Roethlisberger but with specifics on the 2021 cap still scarce, Rooney acknowledged it's too early to get into details.

“I think we’d like to see Ben back for another year if that can work, but as we said there’s a lot of work to be done if that can happen," Rooney said. "There may need to be decisions on both ends for that to happen.”

The cap was $198.2 million in 2020 but could drop to $180 million or possibly even lower in 2021, a byproduct of the COVID-19 pandemic that kept most stadiums — including Heinz Field — empty for all or most of the season.

The Steelers could conceivably save $19 million against the cap if they cut Roethlisberger but Rooney dismissed that notion, pointing to a season in which the 38-year-old was “almost unstoppable” at times while leading Pittsburgh to a 12-4 mark and the AFC North title a year removed from right elbow surgery.

Rooney pointed to a running game that finished last in the NFL in both yards and yards per attempt as one of the main culprits behind a late slide in which the Steelers dropped five of their final six following an 11-0 start, including a 4 8-37 whipping at the hands of Cleveland in the first round of the playoffs.

The team is still looking for Sarrett's replacement and there is likely considerable turnover coming at both offensive line and running back. Leading rusher James Conner is a free agent as is left tackle Alejandro Villanueva and left guard Matt Feiler among others.

Regardless of who is in the fold in 2021, finding a way to take some of the pressure off Roethlisberger is a priority.

"Everybody in the building agrees you can’t finish 32nd in the league in running and feel like you’re going to have a successful season,” Rooney said.

Despite Roethlisberger entering the final stages of what is likely a Hall of Fame career, Rooney isn't ready to turn the page.

While acknowledging backup Mason Rudolph is capable of becoming an NFL starter and the franchise is facing perhaps its most turbulent offseason in terms of roster turnover because of the cap, Rooney isn't ready to blow it up.

“We’re not going to sit here and say ‘We’re three years away,'” Rooney said. "We’re just not going to look at it that way.”

Rooney pointed to a defense that finished third in the league in yards and points allowed as good enough to keep the Steelers in the thick of a hyper-competitive AFC.

That unit figures to stay largely intact in 2021 and if Roethlisberger gets some help, Rooney is confident Pittsburgh doesn't need to start over, be it on the field or the sideline.

While coach Mike Tomlin is entering the final year of his contract, Rooney stressed Tomlin will remain on the job indefinitely.

“I’ll just say I feel comfortable in saying he’ll be our coach into the future,” Rooney said, adding he didn't blame Tomlin for the loss to the Browns.

“In terms of the job he did, we didn’t finish the way we’d like. The playoff game, it’s hard to analyze ... just turning the ball over, you’re not going to win many games. I don’t see how you attribute that to coaching preparation.”

Longtime general manager Kevin Colbert's deal expires after the 2021 draft. Colbert has mulled retirement in the past and though Rooney and Colbert have spoken about Colbert's status, things remain fluid. The intent of the franchise, however, remains the same as it has been for the past five decades: Super Bowl or bust.

“Every year you learn things you want to fix,” Rooney said. "Our mindset is that we’re going to do the things we need to do to try and get better next year. ... Our mindset hasn’t changed.”