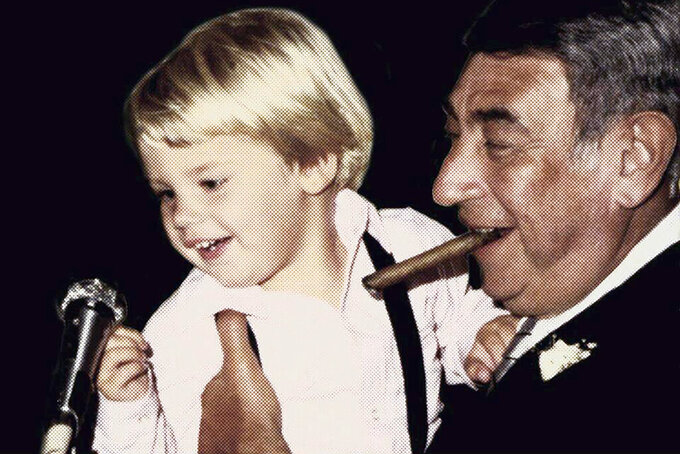 In this 1983 photo provided by Colin Cosell, Colin Cosell is held by his grandfather, famed sportscaster Howard Cosell, at a family wedding in New York. Colin Cosell is normally at Citi Field, rousing the crowd as public address announcer for the New York Mets. Now he's busy working at home, trying to cheer one fan at a time. (Courtesy of Colin Cosell)

NEW YORK (AP) — The requests come by the hundreds: the son of an emergency room nurse, the husband of a doctor, a hospital patient.

Colin Cosell studies them, sorts them. Normally he’d be at Citi Field, rousing the crowd as public address announcer for the New York Mets. Now he’s busy working at home, trying to cheer one fan at a time.

His creative contribution during this health crisis — crafting audio clips for everyone who asks — echoes the booming introductions big league hitters get when they step up to home plate.

“As personalized and customized as possible,” Cosell said.

So instead of “the first baseman, No. 20, Pete Alonso!” to the thump of “The Ocean” by Led Zeppelin, it could sound like this: “Leading off for the Mets, the center fielder, No. 44, Fran Kowalski!” to a song by Frank Sinatra.

A welcome voice amid the virus.

The grandson of famed sportscaster Howard Cosell has recorded nearly 600 introductions since he began a month ago. They’re about a half-minute each and all done for free.

Recently, Cosell noticed the calls were coming from a certain group.

“I was starting to hear from a lot of medical workers and first responders. That’s when it began to hit home,” he said.

“They said these 30 seconds take them away from the maelstrom of being a hospital worker during a pandemic,” he said.

Fans reach Cosell through Twitter at #CallMeUpColin and provide their info, plus a musical choice — Alicia Keys, AC/DC, Shania Twain, Stevie Wonder and a tune from “The Little Mermaid” are among them, along with the “Meet the Mets” theme song.

Many people use Cosell’s call-up recordings for their phone ringtones or outgoing messages. Others add them into videos. Some just like the good feeling they bring of being at a ballgame that’s not being played these days.

“Thanks for adding a little joy while in quarantine,” a person posted on Twitter. “Received this awesomeness,” one wrote. “Colin, you’re a saint for doing this,” praised another.

Cosell said they’ve meant equally as much to him.

“A few stories have brought tears to my eyes," he said. "I heard from someone working in an ER who said it was pretty tough in there, and that he broke away and listened for a few seconds and it helped calm him down.”

The 40-year-old Cosell, who splits the Mets PA job with Marysol Castro, said the tapings take about 10 minutes apiece to do at his Long Island home and he delivers them by email. He goes in order -- health care workers and those involved in the coronavirus fight get first priority, followed by kids.

“It’s been a great way to keep in touch with the fans,” Cosell said. "This has been a way of doing that at a scary, disconcerting, uncertain time for everyone.”

Cosell, by the way, does an incredible, spot-on imitation of his grandfather. No one has asked Cosell to channel Howard in a message, but he’s got a notion how his prickly Poppa would feel about this charitable endeavor.

“I like to think he would be proud,” Cosell said. “He’d probably also call me a fool for doing it for free.”

While nonstop global news about the effects of the coronavirus have become commonplace, so, too, are the stories about the kindness of strangers and individuals who have sacrificed for others. “One Good Thing” is an AP continuing series reflecting these acts of kindness.