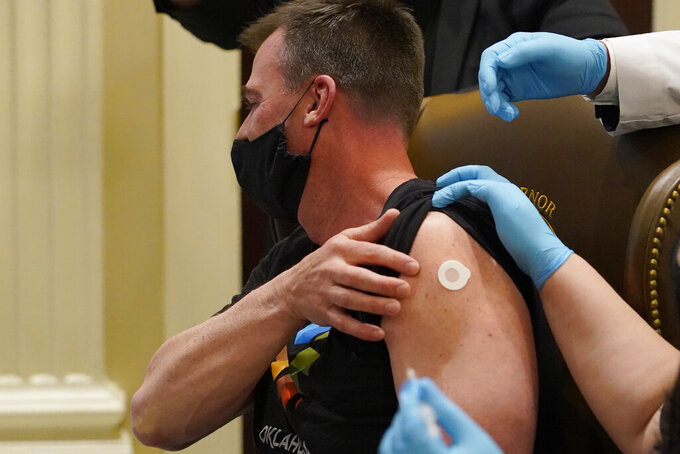 Stitt, a Republican who in July became the first U.S. governor to announce testing positive for COVID-19, received the single-dose Johnson & Johnson vaccine and said he hopes that receiving his shot publicly will encourage Oklahomans who may be hesitant to get vaccinated.

“I wanted to wait until our most vulnerable had the choice, but now that we’re in Phase Four I’m going to lead by example and I’m going to do it,” said Stitt, who flashed a thumbs up to reporters after getting his shot. “I think that me being here as the governor of a state like Oklahoma, hopefully I can encourage others to follow my lead.”

Oklahoma opened up vaccine eligibility to nearly the entire state earlier this month when it added essential workers in a wide range of industries to become eligible. An increasing federal supply of vaccines and partnerships with more than 1,000 private health care providers, laboratories, pharmacies and hospital systems to administer the doses allowed Oklahoma to expand eligibility even further, said Oklahoma’s Deputy Health Commissioner Keith Reed.

“The vaccine is free to all Oklahomans," Reed said. “There are appointments available across the state, including in our metro areas, so if you haven't enrolled in the state portal yet, I highly encourage you to do so."

Reed said surveys have shown about 66% of Oklahomans have indicated a willingness to receive the vaccine, a number he said he hopes continues to increase as more vaccines are distributed.

Oklahoma currently ranks 16th nationally with 30.4% of its population having received at least one dose, compared to a national average of 28.6%, according to data from the U.S. Centers for Disease Control and Prevention. While about 85% of vaccine doses have been administered through state and county health departments, the rest have been distributed through tribal health clinics and other federal partners, Stitt said.

Meanwhile, state health officials reported 194 confirmed new cases of COVID-19 on Monday and 53 additional deaths, bringing the total number of confirmed infections to 437,853 and the state's death count to 7,835.

The seven-day rolling average of both daily new cases and daily deaths in Oklahoma have declined over the last two weeks, according to data from Johns Hopkins University.