Stocks close higher with help from tech, still down for week 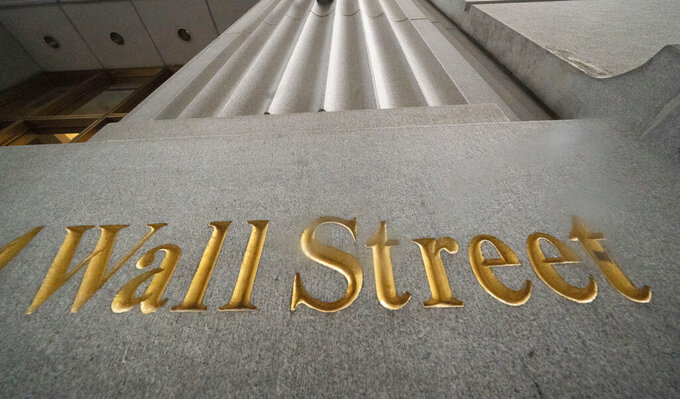 FILE - In this Nov. 5, 2020 file photo, a sign for Wall Street is carved in the side of a building, in New York. Stocks are off to a solid start on Wall Street, continuing a bounce from a day earlier, but indexes are still on track for weekly losses after three days of drops early in the week. The S&P 500 rose 0.8% early Friday, May 14, 2021. (AP Photo/Mark Lennihan, File)

Stocks marched solidly higher again Friday, though the major indexes still ended with their worst weekly loss since February after a sharp pullback earlier in the week.

Investors' worries about the possibility of rising inflation as the U.S. economy recovers from the coronavirus pandemic fueled three days of heavy selling to start the week, and the major stock indexes were not able to make up all of those losses the last two days.

The S&P 500 lost 1.4% for the week, its first weekly decline in three weeks. The Nasdaq marked its fourth weekly pullback in a row, giving up 2.3%, while the Dow Jones Industrial Average lost 1.1% for the week.

The market's rally the last two days reflects a mix of traders piling back into the market, which hit all-time highs just last week, to take advantage of lower stock prices, and a boost in confidence after the Centers for Disease Control and Prevention's decision Thursday to ease mask-wearing guidance for fully vaccinated people. The move is expected to encourage more Americans to go out and spend money, speeding up the reopening of the economy.

Smaller company stocks, which for most of this year have outgained the broader market, also recovered some of their losses from earlier in the week. The Russell 2000 index picked up 53.68 points, or 2.5%, to 2,224.63.

Disney fell 2.6% after reporting lower revenue and missing forecasts for growth in subscriber additions to its video streaming service. Disney had been adding subscribers at a breakneck pace the past year, helped by popular shows like “The Mandalorian” and the pandemic, which kept many Americans at home with little to do except watch TV.

DoorDash vaulted 22.1% after after the company said its revenues tripled from a year ago, helped by homebound Americans ordering in.

Technology stocks led the gainers after sinking earlier in the week as investors fretted about signs of rising inflation. Apple, Microsoft, Facebook, Amazon.com and Google's parent company all rose 1% or more.

Investors have been questioning whether rising inflation will be something temporary, as the Federal Reserve has said, or something more durable that the Fed will have to address. The central bank has kept interest rates low to aid the recovery, but concerns are growing that it will have to shift its position if inflation starts running too hot.

“There’s certainly a lot to be happy about in the reopening and earnings pictures, but at the same time there’s a lot to be worried about if inflation, if these price increases remain and it forces the Fed to act quicker than they want to,” Gaffney said. “That could put a quick halt to the (stock market) rally.”

Data from Commerce Department on Friday showed Americans kept up their share of retail purchases in April, helped by the stimulus checks that have gone out in the last few weeks. However, economists expected retail sales figures to be slightly higher for the month. Sales were up at restaurants and bars in the month, according to the data.

In other economic data, industrial production, which includes output at factories, mines and utilities, rose 0.7% last month, down from a sharp increase of 2.4% in March, the Federal Reserve reported Friday. Auto production fell 4.3% in April, largely because car makers can’t find enough semiconductors. But the output of computers, electrical equipment and appliances, machinery, and metals such as steel all increased.

Bond yields have risen sharply this week but pulled back slightly on Friday. The yield on the 10-year Treasury fell to 1.63% from 1.66% a day earlier.