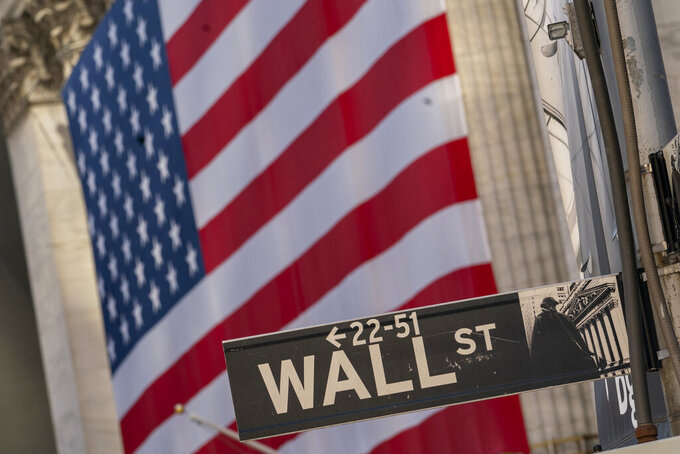 FILE - In this Monday, Sept. 21, 2020, file photo, the Wall Street sign is framed by a giant American flag hanging on the New York Stock Exchange. Stocks are edging lower on Wall Street in early trading, Tuesday, Oct. 13, 2020, as the market cools off following a four-day rally. (AP Photo/Mary Altaffer, File)

The S&P 500 lost 0.6%, giving back some of its gains from a day earlier. The pullback in stocks comes as many forces are pushing and pulling on markets simultaneously. Coronavirus counts are rising at a worrying degree in many countries around the world, and Johnson & Johnson said late Monday it had to temporarily pause a late-stage study of a potential COVID-19 vaccine “due to an unexplained illness in a study participant.”

Meanwhile, uncertainty about the prospects for more stimulus for the economy from Washington continues to hang over markets.

“Absent of getting any kind of fiscal stimulus, we've already seeing a leveling off in economic growth and some weakening under the surface, ” Liz Ann Sonders, chief investment strategist at Charles Schwab. “There's concern that without that additional fiscal stimulus the economy could run into a little bit of trouble here.”

Stocks have been mostly pushing higher this month. Already the major stock indexes have recouped their losses from September's market swoon.

Tuesday's market slide came as the third-quarter earnings reporting season got underway. Investors will be looking for some measure of clarity over the next several weeks as CEOs line up to report how their companies fared during the summer. Wall Street is expecting another sharp drop in profits for the third quarter, nearly 21% for S&P 500 earnings per share from a year earlier. But if that proves correct, it would not be as bad as the nearly 32% plunge for the spring, according to FactSet.

Several companies kicked the season off on Tuesday with better-than-expected reports. JPMorgan Chase, Johnson & Johnson, Citigroup and BlackRock all reported stronger results for the summer than analysts had forecast.

Delta Air Lines reported a worse loss than Wall Street had forecast, as the pandemic keeps many fliers grounded, and its shares slid 2.7%.

Other airlines and travel-related companies were also weak, and Royal Caribbean dropped 13.2% for the biggest loss in the S&P 500. The cruise operator said it will sell up to $575 million of stock to raise cash.

On the winning side was The Walt Disney Co., which climbed 3.2% for one of the bigger gains in the S&P 500 after it announced a major reorganization of its company to focus on Disney Plus and its other streaming services.

The yield on the 10-year Treasury fell to 0.72% from 0.79% late Friday. Treasury markets were closed Monday for a holiday.

A government report showed that prices for consumers were 0.2% higher in September than August. That matched economists’ expectations, and it also showed that month-over-month inflation has slowed since strengthening in the summer.

Lower inflation gives the Federal Reserve more leeway to keep interest rates low, though it has said it may keep its benchmark rate at nearly zero even if inflation tops its 2% target.

While the Federal Reserve keeps the accelerator floored on its support for the economy and markets, a deep partisan divide has Congress and the White House struggling to deliver more aid of their own. Extra unemployment benefits for laid-off workers and other stimulus that Congress approved earlier this year has already expired.

President Donald Trump has said that Capitol Hill Republicans should “go big” rather than the limited approach they’ve been advocating. If stimulus can’t arrive before the election, some investors have gotten more optimistic about the chances of a big support package next year if Democrats sweep the upcoming election.

“There’s a greater likelihood for a stimulus package, and an even bigger one, should we get a Blue Wave," said Sam Stovall, chief investment strategist at CFRA. “And investors are probably responding to the poll numbers that are implying that we won't have a contested election.”

Smaller stocks, which tend to move more with investors' expectations for the economy than the biggest stocks, were weakening more than the rest of the market. The Russell 2000 index of small-cap stocks fell 12.21 points, or 0.7%, to 1,636.85.