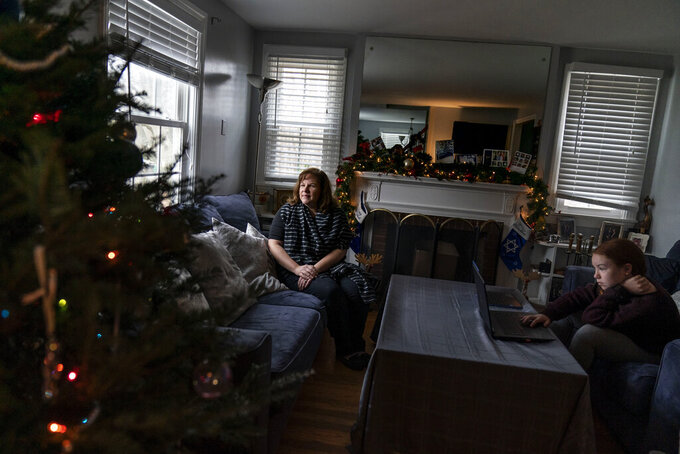 Eileen Carroll, left, sits for a portrait as her daughter, Lily, 11, attends school remotely from their home in Warwick, R.I, Wednesday, Dec. 16, 2020. When Carroll's other daughter tested positive for the coronavirus, state health officials told her to notify anyone her daughter might have been around. Contact tracers, she was told, were simply too overwhelmed to do it. It's the same story across the U.S., as a catastrophic surge in infections has made it difficult or impossible to keep up with the calls considered critical to controlling outbreaks. (AP Photo/David Goldman)

When Eileen Carroll's daughter tested positive for the coronavirus, Rhode Island health officials called with the results, then told her to notify anyone her daughter might have been around. Contact tracers, she was told, were simply too overwhelmed to do it.

That's also why tracers didn't call to warn the family that it had been exposed in the first place, said Carroll, of Warwick, Rhode Island. Luckily, she said, the relative with COVID-19 they had been around at Thanksgiving already alerted them.

It's the same story across the U.S., as state and local health departments ask people who test positive to warn friends, family and co-workers themselves because a catastrophic surge in infections has made it difficult or impossible to keep up with the calls considered critical to controlling outbreaks.

Health officials say do-it-yourself tracing is not ideal, but as infections and hospitalizations soar, it's likely the most effective way to reach people who may be at risk.

Over 16.5 million people in the U.S. have been infected and more than 300,000 have died, and officials fear transmission will only get worse as people gather for the holidays.

Some health departments aren't being informed of infections for several days, making it impossible to call at least 75% of a person's contacts within 24 hours of a positive test, which experts say is necessary to control outbreaks. What's more, many people won't pick up the phone or refuse to answer questions when tracers call. Sometimes, there are simply too many positive tests to call everyone.

“If you don’t have the bandwidth to keep up, then you have to make strategic decisions ... and I think it’s a smart move,” Emily Gurley, an infectious disease epidemiologist at the Johns Hopkins Bloomberg School of Public Health, said of asking people to warn their own contacts.

North Dakota’s health department curtailed much of its contact tracing among the general public in October as the virus surged, limiting efforts to health care facilities, schools and universities, and workplaces. Tracers still call people who test positive, but no one outside their households, said Brenton Nesemeier, who manages COVID-19 case managers and field epidemiologists.

“We realized that we needed to prioritize positive cases because they were ... the ones who were potentially out in the community, and they’re the ones with the most questions,” Nesemeier said.

“In turn, they’re able to reach their contacts faster than we are because (people) will more likely answer a phone call from a friend,” he said.

Nesemeier said there is no way to know if people are following through, but when North Dakota was doing full-fledged contact tracing, those who were willing to share information about their contacts often had already told them anyway.

Pennelope Denson, a 19-year-old from Riverview, Michigan, near Detroit, said that when her boyfriend's mother and brother got sick and tested positive about two months ago, she got tested and advised everyone she had been around to do the same.

It took nine days to find out she had contracted the virus, and two days after that, she got a call from a contact tracer at the Wayne County Health Department. The tracer took only her father's information, Denson said, and told her to call anyone else she might have been around.

She said her boyfriend's mother and brother never got a call from a tracer after they tested positive, “so nobody told me to quarantine, but I did it myself.”

In Cole County, Missouri, which includes the capital of Jefferson City, when someone is tested, they're given a packet that includes information on reaching out to their own contacts if the results come back positive.

Kristi Campbell, director of the county health department, announced the do-it-yourself effort last month, saying it was taking officials five to seven days to learn of positive tests and that tracers weren't always getting the information necessary to call people.

“It is imperative that we get past the barriers of traditional contact tracing,” Campbell said in the televised announcement. “This will eliminate wait time and hopefully stop people from unknowingly spreading the virus."

In Indiana, the health department recently said it would no longer ask for a detailed list of symptoms and would encourage people to call their own contacts. Tracers still try to collect contact information, but "we recognize that this can be quicker and that many people are reluctant to answer a text or call from an unknown number,” spokeswoman Megan Wade-Taxter said by email.

Testing and tracing is a bedrock of the public health response to disease outbreaks, but both got a slow start in the U.S. when the pandemic took hold. Underfunded health departments had to hire and train enough people to do the tracing, then often met with resistance and suspicion.

Now, there simply aren’t enough tracers to keep up.

Gurley, the Johns Hopkins epidemiologist, said that even if contact tracing programs are incomplete and slow, they are having an impact because many people need to know how to effectively isolate and where to get help with food, housing and rent.

“It could be a lot worse if we did not have these programs,” Gurley said. But she added that it could be much better if health departments had more resources.

“From the beginning, the conversation in public health has sort of been, ‘Here’s the resources we’re giving you, do the best you can.' But they don't have the bandwidth to keep up,” Gurley said.

“I think it’s a really frustrating, heartbreaking example of how we haven’t prioritized this, and one of the reasons we are in the place we are today,” she said.