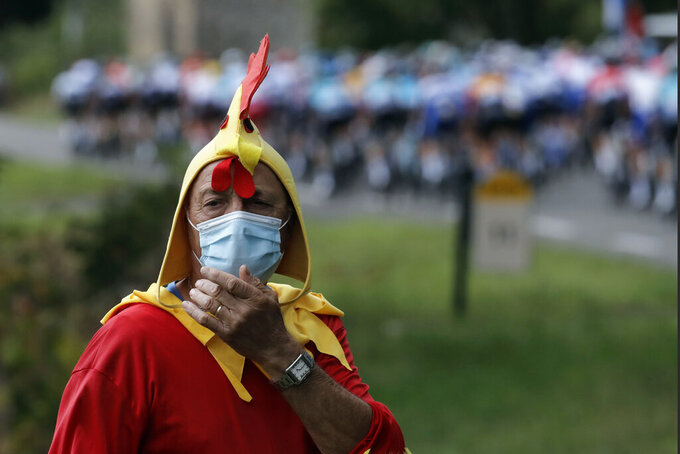 A spectator dressed up as a rooster stands along the road of the ninth stage of the Tour de France cycling race over 153 kilometers (95 miles), with start in Pau and finish in Laruns, Sunday, Sept. 6, 2020. (AP Photo/Christophe Ena)

LA ROCHELLE, France (AP) — It was a rest day like no other for the Tour de France bunch.

After nine nervous and exhausting stages that took the peloton from the Riviera to the Pyrenees via a short journey in the Alps, riders would have normally taken some time off on Monday with their friends and families.

But this year is different.

In addition to their recovery routine, the 166 remaining riders stayed in their own “bubble" with a Damocles sword hanging over their head as they underwent coronavirus tests that will decide whether they can keep on racing.

“It's disturbing, but we need to be patient," said French rider Warren Barguil, sitting alongside his Arkea-Samsic team leader Nairo Quintana during a video conference. “We'll see our families in Paris on Sept. 20."

Even with the video filter separating them from reporters, both riders kept their face masks on as they answered questions.

Tour de France organizers said about 650 tests will be performed. Some took place on Sunday, with the majority of riders being tested Monday.

Under threat of cancelation at some point — more than 30,000 people in France have died after contracting the coronavirus, making the country one of the hardest-hit in Europe — the Tour has been salvaged by pushing it back from its traditional July date to end of the summer. The price paid for the race to be run is a heavy sanitary protocol which includes mandatory COVID-19 testing for riders and teams staff members on rest days.

All were tested before the Tour started in Nice and have since lived in the race quarantine, making sure they stayed away from fans and sponsors usually omnipresent during the three weeks of the popular event.

After four staff members of the Belgian team Lotto-Soudal were sent home following abnormal coronavirus tests on the eve of the Tour, the race has been run without any further COVID-19-related incidents.

But keeping the social distancing with the roadside crowds in place has not been an easy task. During Saturday’s first stage in the Pyrenees mountains, many spectators without masks did not respect the two-meter distance required by organizers as they cheered their favorite riders.

Although test results are not expected to be unveiled before Tuesday, teams will soon find out whether the virus has contaminated the race bubble.

“It would really be a shame to see a rider excluded from the Tour de France because he has been cheered on by not attentive enough fans," Cofidis team manager Cedric Vasseur said.

The next round of testing could indeed throw the race into turmoil. Anyone who tests positive will have to leave the race and any team with more than two positive tests — either rider or staff — within seven days will be thrown out.

To avoid false positive results that could rule healthy riders out of contention, Tour organizers have said they will try to perform a retest and a blood analysis as quickly as possible. They have set up a mobile coronavirus lab that can produce results in two hours.

Following Sunday's final stage in the Pyrenees, where Primoz Roglic of Slovenia seized the race leader's yellow jersey, the 22 Tour teams have traveled by bus to the western Charente region. The race resumes Tuesday with a flat stage linking two islands, the Ile d'Oleron and the Ile de Re.