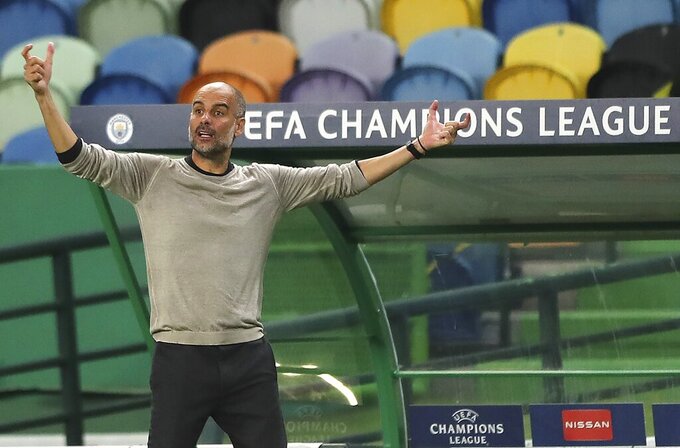 Manchester City manager Pep Guardiola was tight-lipped Friday over whether his club would be keen to sign Lionel Messi for next season after being heavily linked with the Argentina star in the current transfer window.

Messi decided to stay at Barcelona to avoid a legal dispute with the club after having previously announced he wanted to leave to “seek a new direction” in his career.

City would have been the favorite to sign Messi if he had managed to make his way out of Barcelona. Instead, he will stay until the end of his contract that runs until June 2021.

“I think Leo explained quite well his feelings and I don’t have anything to add," said Guardiola, speaking publicly for the first time about the Messi saga. “He is a football player for FC Barcelona, the club I love, and nothing more to say."

Guardiola coached Messi for four seasons while in charge at the Spanish club.

Pressed on whether City would push to sign Messi as a free agent, Guardiola said: “I don’t know.”

Guardiola was subdued ahead of City’s first match of the Premier League season, a trip to Wolverhampton on Monday.

City has signed two players — winger Ferran Torres and center back Nathan Aké — but neither is expected to be a regular in the first team. Chelsea, meanwhile, has spent more than $250 million on new players, while Liverpool is on the brink of signing Bayern Munich midfielder Thiago Alcantara — a player Guardiola knows well from his time at Bayern.

Guardiola said he had not been interested in signing Thiago, despite there being a vacancy in the center of City's midfield after the departure of David Silva.

“Since day one when I arrived here, I am more than satisfied with what I had in the team,” Guardiola said. “I know the club do absolutely everything … not just for me but for all of us.

Guardiola said Sergio Aguero is not fit to start the season after only recently returning to training after a knee injury sustained in June.

Aymeric Laporte is unlikely to play against Wolves, either, having had just one training session after contracting the coronavirus during City’s short offseason. Aké, another left-footer, is likely to start.